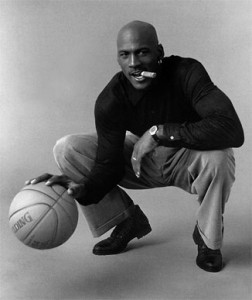 There is no doubt in our minds that Michael Jordan is the G.O.A.T. and we genuflect out of respect for his basketball skills and accomplishments at both the NCAA and NBA levels. Outside of former Philadelphia Warrior legend and City of Brotherly Love native Wilt Chamberlain and possibly Bill Russell, perhaps no individual is more deserving of induction into the Naismith Basketball Hall of Fame then Michael. Hoops web sites all over the world will be paying homage to #23 today and rightly so.

However, Philadunkia is a blog dedicated to the Philadelphia 76ers – the good and the bad; on and off the court. So even though we realize that MJ absolutely owned our home team during his playing days – from the 56 he dropped on Barkley back in 1987 to the “Stackhouse Game” to the 30 spot he hung on Iverson as a Wizard – we still felt that since this is a 76er loyal site, we should “flip the script” as they say and run down a list of the best moments in 76ers history that occurred at the expense of Air Jordan and his teammates.

Here is our list of the Top 5 moments in which the 76ers somehow managed to stick it to Michael Jordan:

5.         December 17, 2006— With a 106-96 victory, the Philadelphia 76ers ended a 16-game series losing streak to MJ and the Bulls by defeating the Bulls for the first time in over four years. The 76ers had not beaten the Bulls since December 8th, 1993, a span that included seven home games. Philadunkia’s home team experienced three coaching changes, four 50-loss seasons and two separate stints by Derrick Coleman in a Sixers uniform since that last W in 1993. In the mean time, the Bulls averaged 63 wins and won two NBA titles.

The Sixers won behind 31 points from Allen Iverson and Derrick Coleman scored 10 of his 18 points in the third quarter. Scottie Pippen scored 22 points and “His Airness” added 20 for the Bulls. 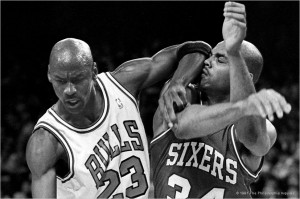 Barkley shot 18-25 on the night, which is a ridiculous .720 field goal percentage. Jordan was even better, making 19 of 25 shots for an unconscious .828 percentage. MJ broke the Spectrum record of 51 held by Moses Malone set against Detroit on Nov. 4, 1984. He also had 9 rebounds and 4 steals. 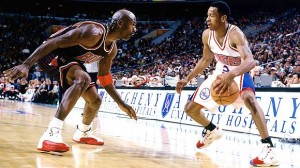 3.         March 12, 1997— One of the few highlights from that 22-60 season. After some controversial comments in December of the 1996-97 season by rookie Allen Iverson in which he basically stated that he feared no one in the NBA and that the other players would have to earn his respect, A.I. received a stern warning from MJ that Iverson may not respect others in the League, but “You have to respect us.”

When the two met in March of that same season, it was on. The rookie and the G.O.A.T. spent much of the game going at each other, trading baskets as if they were the only two on the court. Then in the 3rdquarter, Iverson was iso’d on Jordan at the top of the key and after a nice setup he hit Jordan with his infamous killer crossover, broke MJ’s ankles and dropped a sweet J in for two of his 37 points. The reverse angle isn’t an easier on Jordan’s ankles. This play is arguably the most famous “clowning” of Jordan available on video tape.

2.         May 11, 1991— Despite suffering from tendinitis in his left knee and limping badly throughout Game 3 of the 1991 Eastern Conference Semifinals, Jordan puts on a spectacular 46-point performance. However in front of a packed house at the Spectrum, the Sixers got 29 points from dead-eyed shooter Hersey Hawkins including the game winner, to go with 19 points from “Sir Charles” as well as 25 points from Barkley’s best friend Armon Gilliam and walked off with a thrilling 99-97 victory over the Chicago Bulls. Jordan shot the lights out at the old building on 20-for-34 shooting from the field, but the Sixers still found a way to win. Hawkins scored 25 of his 29 points in the second half. The W left the Sixers down 2-1 in a best-of-seven-series that they would eventually lose 4-1.

Hawkins’ game-winning basket, was a 3-point shot from the deep right corner with 10.3 seconds remaining. The tri-fecta came on a set play drawn up by Jim Lynam during a timeout. With the Bulls holding a 97-95 lead, Spectrum favorite Ron Anderson in-bounded the ball to Barkley. Chuck then drove to the basket with Horace Grant hanging all over him and as the Bulls’ defense went to help Grant and converged on Barkley, Chuck fed “The Hawk” who was standing alone in the corner. Hawkins did not hesitate at all – BUCKETS. The snapping of the twine sent Hawkins and Barkley into a hug-athon, but it was a premature victory celebration.

The 10.3 seconds remaining was more then enough time for Chicago to tie or even win the contest, especially with MJ as hot as he was that game. But the G.O.A.T. wouldn’t even get a chance to save the Bulls on this night. Scottie Pippen in-bounded to Bill Cartwright, who dropped the pill back to Pippen. Pippen, who was being guarded by then Sixer defensive stopper Ron Andersen, put the ball on the deck and drove toward the key. Anderson with help from Barkley, closed down the lane and instead of passing the rock, Scottie decided to launch an ill-advised leaner which bricked off the backboard. Gilliam grabbed the rebound, game over. 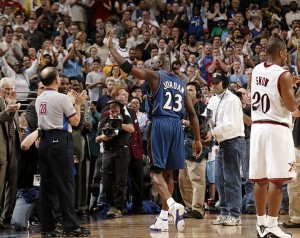 1.         April 16, 2003— Jordan who had returned from his second retirement and was then rocking #23 for the Washington Wizards played the final game of his insane career here in Philadelphia and needless to say his storied basketball life ended in a way that could not have pleased Mike. Jordan finished with 15 points, four rebounds and four assists in 28 minutes during a 107-87 loss to the 76ers that sent Jordan into retirement forever with a losing taste in his mouth.

But all 21,257 Sixers fans stayed classy throughout the lopsided victory. As he sat on the bench late in the 3rd quarter and throughout most of the 4th, the First Union Center crowd began chanting “We want Mike!, We want Mike!”. He answered the calls and returned to the game for a little more burn with just over two minutes left. When MJ finally exited the floor for good with 1:44 remaining in the 4th quarter, Jordan received a three-minute standing ovation from his teammates, his opponents, and the Philly crowd.

He drank it all in with his trademark smile and a wave to the crowd. After the game Jordan said, “This is the final retirement…The Philly people did a great job. They gave me the biggest inspiration, in a sense.” Jordan continued, “Obviously, they wanted to see me make a couple of baskets and then come off. That was very, very respectful, and I had a good time.”