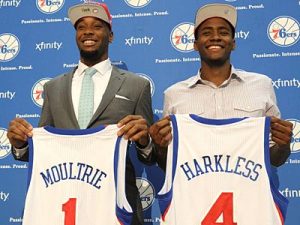 The Sixers selections and moves at the 2012 NBA Draft have drawn reviews that range all over the spectrum from the online “experts” as well as the talking heads on television.  Chad Ford ESPN.com’s NBA Insider gave the 76ers a grade of B+ as did Sam Amick over at SI.com.  However, the folks on the tube weren’t as kind.

While those on the outside have varying opinions on the 7-6’s Draft night activities, one thing is or sure, here at Philadunkia the consensus is that Thursday night’s moves raised more questions for this franchise then they answered.

After the jump, our reviews of the Sixers 2012 NBA Draft…

The Mo Harkless pick was met with some suprise. While he is extremely athletic and has high potential to produce, seeing the Sixers pass on the plethora of available bigs was somewhat surprising.

Harkless is a SF/PF combo a la Thad Young, and at this point it is uncertain exactly where he will fit in with the team. He certainly adds depth and athleticism, but doesn’t seem to immediately address any of the Sixers glowing issues, such as shooting and the lack of a solid inside presence.

His addition to the roster could signal an upcoming trade involving either Iguodala or Thad. In the mean time, the roster is over-filled with similar position players, so despite the clear value of the pick and ability of Harkless, their selection is somewhat surprising.

If there is one thing that I like in a franchise, it’s being aggressive.  That is exactly what the Sixers were last night.  They boldly grabbed Harkless at #15 – a selection no one saw coming and then they identified a need, found a guy (Arnett Moultrie) that could solve it immediately and did everything in their power to obtain him.

The 233-pounder from Mississippi State averaged 16.4 points per game on 54.9% shooting in the SEC.  Add that to his athletic NBA-ready frame, natural ability to find the ball (10.5 boards per game) and the Sixers immediate need for a big man of his stature and any Sixers fan should be excited to see this kid next winter.  The best part was that it only took a future first rounder (ask any draft expert and they will tell you that after this draft, the next few are going to be more slim than Anthony Davis’ stature) and Justin Hamilton to get it done.  Way to be aggressive Brain Trust.  Way to get the over used “guy we wanted the entire time”.  Extremely pleased with this trade.  Hopefully this trade is signs of things to come.

The late first round trade for Arnett Moultrie made the Maurice (formerly known as Moe) Harkless pick a bit more understandable. The interest for Moultrie was known for weeks and there would have been no surprise if he would have been taken with the 15th pick. But maybe, the Sixers knew that Moultrie would fall until later all along.Thus, instead of filling their need at 15, they went with “the best available player” in Harkless.

The problem is that the Sixers are already laden in the small forward department, including the one and only Andre Iguodala. Prior to the Moultrie trade, it seemed inevitable that Iguodala was going to be traded to most likely get a big man in return. Now, it seems that Harkless will be groomed under the wing of Iggy and the 3/4 combo of Thad Young.

Yet, it still seem that Sixers are not done by a long shot this off-season, and the addition of Harkless actually may have given them leverage when shopping Iguodala. The  Initially, it looked as if the Sixers had made a drastic mistake especially when the likes of Perry Jones and even the now risky Jared Sullinger were still out there. After, further consideration they may actually have a plan in an interesting off-season full of forthcoming tough decisions.

The 76ers were a roller coaster ride during the 2011-12 season, so why would their activities on Draft Night 2012 be any different?  Nothing against the 6-8, 207-pound Maurice Harkless, who seems like a solid prospect, but the drafting of another “tweener” forward who can not shoot the ball (44% on FGAs & 20% on 3PAs) made no sense to me at all and I felt like punching something.

To say I was disappointed and confused after David Stern announced Maurice’s name at #15 is an understatement.  If the Sixers weren’t going to trade up in an effort to land the scorer / 2-guard they so desperately need, then either Terrence Jones of Kentucky, or one of the available 7-footers or even sharp shooter John Jenkins out of Vandy would have made more sense to me at #15.  Again, adding another repetitive part to the already crowded wing situation on the 76ers roster does not make sense.  Unless either Evan Turner or Thad or Dre is on the way out.

Of course the Sixers reeled me back in with the trade for Arnett Moultrie.  I would have been delighted had they simply taken him at #15.  The future 1st round pick is Lottery protected, so the 7-6 basically got a player who will help them immediately for a future mid-first round pick and a second round pick.  Moultire will have a huge impact on the boards and on defense for the Sixers in 2012-13, so this pick makes sense to me and actually brought a smile to my face.