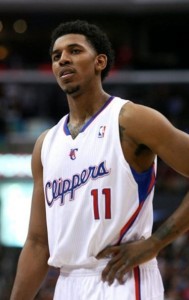 Nick Young, exactly zero games into his 76ers career, has already become something of a lightening rod.  Even in Philadelphia, that’s pretty impressive.

The story goes something like this: the Sixers sacked a productive, if overpaid, player in Elton Brand, then gave his money to Kwame Brown, Spencer Hawes, and our interview subject.  Brown is a mediocre player coming of a significant injury.  Hawes, well, is Hawes.  We all know what kind of player he is and what we will get from him.  And then there is Young, a streaky sharp shooter with no lack of confidence who was basically brought here to replace the very popular and very productive Louis Williams.

But let’s put all of those polarizing details aside for a second.  After talking with him on the phone, Young seems like a nice guy and we all know he’s a hell of a fun player to watch.  Plus Doug Collins has a pretty impressive recent track record of shepherding toolsy but decent players into the land of pretty good-dom (see Hawes, Spencer and Young, Thaddeus).  So let’s have some faith that Collins can help Young reach his full potential here in Philly.  Young picked up his cell and talked to us last night from his home town of LA, where he’s been thinking about housing, working on his agility, and watching his college girlfriend run in the Olympics.

Philadunkia:  You’re moving across the country on a one-year deal. Where do you stay? A hotel? Do you rent a house?

Young:  I’m just looking to rent a place right now. I’m still in LA, I haven’t found a place yet though. You know anybody renting?

Philadunkia:  So who’s coming east with you?  Family?  Who’s your entourage?

Young:  My brother comes around with me.  I’m bringing a cousin of mine.   A few friends of mine too. A close friend.

Philadunkia:  What areas of the city are you looking at?

Young:  I might try to get a place downtown.  And there’s a place close to the training complex.  Some [of my new teammates] have been helping me out…I was already in town for a week.  I drove around to get used to the place a little.  It’s different from LA.

Philadunkia:  Have you gotten a chance to talk to any of your teammates yet?

Young:  I know a couple of the players.  Jrue Holiday.  Iguodala, just from being in the League.  I play with Dorell Wright.

Philadunkia:  What about coach Collins?

Young:  We went out to dinner, me and the coaching staff, so I got a chance to talk to him. We talked about what he sees for me this year.  A little scoring.  That’s what I do.  Just me being, big, bringing more depth to the team.  Through my height.  I can play the two, the three.  Help out with Iggy a little bit.  We just had a good, long talk. I can’t spill all the beans.

Philadunkia:  How do you see yourself fitting in with this team?

Young:  I’ll get a real sense once we start playing together.  Philly’s a tough place. “The fans will [get on you].”  People keep saying that.  When I’ve played here, I saw fans making posters, talking crazy.  I’m looking forward to it.  It’s going to be a challenge.

Philadunkia:  Are you going to start?

Young:  I really don’t know yet.  In training camp, you see what’s up.

Philadunkia:  Would you rather start?

Young:  Not really.  I just want to get out there and play.  Just get my minutes and contribute.

Philadunkia:  You have a reputation for being a gunner.  Are you working to tweak your shot selection?

Young:  I’m not a gunner.  It’s more of a confidence.  I believe I can make those shots.  When it’s in my hands, I believe nobody can stop me.  I’m not going to lose that no matter where I go.  I just go out there and play the game.

Philadunkia:  At this stage of your career, at 27, can you change your game? Are you, effectively, “what you are?”

Young:  You learn more every year.  I’m just trying to go out there and play my game.  I get buckets.

Philadunkia:  You were having a strong season with the Wizards, but when you were traded to the Clippers your numbers dipped across the board.  What happened?

Young:  Really, I just didn’t get a chance to practice with the team. They just threw me out there; threw me in the lineup right away. I didn’t know any of the players or anything. But once the playoffs came, I felt more confident.

Philadunkia:  Was it hard going home? (Editor’s note: Young is a native Angelino.)  Was it an added distraction to have family and friends so close?

Young:  That was a part of it too.  [More than that though], I was just happy to be on a playoff team.  To get a chance to be seen. Making the playoffs is something you get addicted to.  There’s nothing like it.  The fans are crazy.  There’s nothing like it.  I didn’t want to go back to a team that’s rebuilding.  I want a team that’s been there.  Wants to go back and see how far it can go.  This is the perfect team to do that with.

Philadunkia:  Will the Sixers be competitive this year?

Young:  I know when we played them, it was defense, defense, defense.  How they shared the ball [stood out].  People say they made [the second round] just cause of D-Rose.  No.  They played tough all year.  The way they started the season…they came out hot. They’re still on the rise.  And that’s what I see them being.  And I add to that.

Philadunkia:  How does this team fit in the East?

Young:  We could go anywhere from two to five.

Philadunkia:  Even with the improvements other teams in the conference have made?  What about the Nets?

Young:  They’ve made themselves probably one of the top two teams in the East.  If they can get that piece, the piece they’re really trying to get, they might be number one.

Philadunkia:  Do you view Philadelphia as a potential long-term home, or are you even thinking that far ahead?

Young:  I’m not even thinking that far.  I’m just focused on this year.  I like the team.  I wanted to be here.  They need some more excitement.  I want to bring that.

Philadunkia:  As one of the veterans on this team, is leadership something you’ll bring?

Young:  Most definitely.  I’ve been in the League.  This is my sixth season.  I’ll be one of the oldest two guys on this team now.  I’ve gotta have a voice, and step up and try to be a leader as much as I can…Iguodala is one of the players who, people see how hard he plays, he’s the floor leader.  I like to talk trash.  I can see me talking trash and getting us all hyped.

Philadunkia:  What happened?  You could have had really athletic kids.

Young:  We’re good friends still, we still hang out.  I was actually supposed to go out there (London) and watch her.