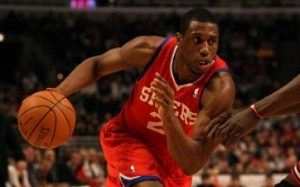 There was a time not too long ago (about 24 months if you’re a stickler for exactitude) that Thaddeus Young had the distinct look of a player who might struggle to find his place in the NBA.  The criticism directed at him: heavy and possibly deserved.

After an outstanding rookie season and a middling follow-up, he just withered in the context of Eddie Jordan’s ill conceived Princeton O.  In retrospect it’s not exactly an enormous surprise that a player who’s game is predicated on athleticism and the fast break would be less successful in a system that doesn’t have much use for those skills.  Still, all the same, the plain fact was that Thad struggled in 2009-10.

But then something happened: Thad started playing much, much better.  He swore off the three-ball and began attacking the rim.  The result: a season after, by the reckoning of Wins Produced, that he tallied negative wins for the Sixers, he played 56 percent better than the average forward.  When was just as good in 2011-12, his head-scratching roller coaster story felt complete.  Some chalk up his rise to the influence of Doug Collins, whose arrival coincided neatly with his resurgence.  Some point to maturity, natural progression.  Some just shrug: in the NBA, stuff happens.

Whatever the factors that underpin his unusual volatility, one thing is clear: the Sixers (big ticket off-season acquisitions not withstanding) will absolutely need Thad to be his best self if they’re to repeat last season’s run.

In a recent conversation with Philadunkia, the now-longest tenured Sixer looked ahead to the coming season, talked about which position he’s going to play, and told us why, when a friend told him the Sixers had landed Andrew Bynum, he didn’t believe him.

Philadunkia:  We heard you got married recently.  Congratulations.  How’s married life treating you?

Philadunkia:  What are aspects of your game have you been honing in on this off-season?

Thad:  I’m trying to work on everything, but I’m really trying to get myself acclimated to playing the small forward spot.  I’m working on some things to get myself even better there.

Philadunkia:  How will your minutes get split between the three and the four this year?

Thad:  As of right now, I’m not sure.  The coaches told me they want to play a little three as well as the four.  Right now I’m thinking it’s going to be half and half.  Half at the three and half at the four.  So, as of right now I’ve definitely got to get myself situated in that spot.  It’s been three or four years since I played small forward primarily.

Philadunkia:  Okay.  For point of reference, if you’re going to split time between the two forward spots this year, what would you say your playing time breakdown was last year?

Thad:  I would say last year I was primarily at the four. 85 percent of my minutes were at the four spot.

Philadunkia:  Which position are you best suited to play?

Thad:  I think with my build and the way I play, I can play bothbecause I’m a tweener.   I have the ability to switch between spots, so I wouldn’t limit myself to one spot on the floor.

Philadunkia:  Where have you been working out?  Down in Atlanta with Mark Price again?

Thad:  I’ve been working out with James Harvey.  (Editor’s note: Thad is referring to former Univ. of Memphis guard James Harvey who now works as a basketball coach / trainer / instructor in the Memphis area.)

Philadunkia:  Last year was a roller coaster.  You got out the gates faster than anyone, struggled badly in the back end of the regular season, then had a better playoff run than I think anyone expected.  What was it like on the inside?

Thad:  Of course, when everything is going good everybody is great and along for the ride.  Feeling fine, like we can’t be stopped. But you’re going to go through a stretch where you lose some games, and you just have to go in the locker room and say, “Wait. We have to stop this at some point.”  I think we did a great job of that, as far as coming into the locker room and not getting down on ourselves.  Realizing we can do something special here, and then doing something special.

Philadunkia:  What was last season’s Sixers team?   Were you a great team that underachieved or an average team that played over its head at times?

Thad:  I think we were a good team.  I wouldn’t say the greatest — I don’t think we were a great team — but we were definitely a good team who could go out there and win basketball games.  That’s what we knew how to do. We knew we could go out there and just will our way through games and just play.  And we had the jump on everybody, cause we brought back our whole team and everybody else was just trying to mix and match pieces.  When we had that same team from the year before, we already knew our system.  All we had to do was come into the league and run it.

Philadunkia:  You arguably had the best season of your career.  What was different?

Thad:  I think it’s just maturity and growth.  The coaching staff and the new ownership made it much easier on us as a team…In practice, Coach Collins was laid back and got off us a little bit as far as practicing a whole bunch.  He would let the guys rest a little bit.  He would give us days off and just have a couple days to be prepared.  I think we rested more last season than we did every other season. He was always on us about getting out rest and getting home and getting off our feet.

Philadunkia:  Take me back to Game 7 against Boston.

Thad:  We definitely felt we could win the game.  We knew we were a younger team…but those guys are a veteran team and they just find ways to win.  They’re a championship caliber ball club and they know how to do some things at certain times to win basketball games.  And that’s exactly what they did. At the end of the game they just…knocked down some big shots.

Philadunkia:  On the plane ride home, was there any sense that Game 7 was the last game that core group was going to play together?

Thad:  We knew some changes were gonna come.  I didn’t know I was gonna be the last Sixer from my rookie year on the team.

Philadunkia:  Where were you when you got the news about Bynum?

Thad:  I was in the gym working out.  And one of my good friends came running into the gym and said, “You guys traded for Bynum! ”And I was like, what?  He said, “No, you guys traded for Bynum.”  I said “Man, get out of here.  I’ve got to work out.  I don’t have time for your games right now”, cause he had been making jokes about trades all summer.  But when that happened he was like, “Man, I’m dead serious.  Go look right now.”  When we got back to the house the chef was cooking and it popped up on the tube and I just thought, “Wow.” I was very happy, I was excited, but I was also heartbroken and torn.  You play with certain guys for so long that to see them go just like that.  It was like, we were brothers and now they’re on another team.  Since day one, I was on the team with Dre, Lou, and those guys.  So it was kind of crazy to just see him go.  But I understand it’s a business and life has to go on.

Philadunkia:  It was the most successful season the Sixers have had since you’d been drafted.  Was it bizarre to see the group taken apart so suddenly?

Thad:  Yeah, it was definitely strange to me because I thought we had done so well last season.  I thought it was going to be another year or two before we started moving pieces around and starting to figure out what we’re going to do.  It was a situation where we had the contracts and it was a now or never type deal.  They had to make a decision.  I understand it’s a business.  I was personally happy with last year’s team and I’m happy with this team now.

Philadunkia:  How close were you to those guys; Brand, Iguodala, and Lou Williams.  What do those losses mean to you personally, and as a team?

Thad:  I was very close with all three of those guys.  Me and Louwere captains of the second unit and Dre and EB were captains of the first unit.  It was one of those type deals where, wow, they blew up the four horsemen.  We were the four veteran guys on the team who kind of kept everything together.  At the end of the day it’s still a business.  I hated to see them go, but I understand the situation.

Philadunkia:  How is the team going to play different this year?

Philadunkia:  Are you going to start?  Should you?

Thad:  I’m definitely hoping so.  I’d love to start.  But whatever the team needs me to do I’m gonna do it, that’s the kind of person I am. But I definitely want to be a starter this year.

Philadunkia:  There are some analysts who think you’re better off the bench.  Thoughts?

Thad:  In years before, when I started, I did very well.  I had two of my best years starting.  I don’t think it really matters.  It’s just a matter of going out there and playing. At the end of the day though, everybody wants to be a starter.

Philadunkia:  You’re now the longest tenured guy on the roster.  Are you taking on any new leadership responsibilities?

Thad:  I know how the fans of the city are and I know just about everythingthat goes along with them.  The organization [keeps me in the loop] on a lot of things that are going on...We have to go out there and execute, we’re anextension of our coaching staff. I think I have to be more vocal now.  I was kind of a silent killer in the past.  I have to speak up on a lot of issues.

Philadunkia:  Any predictions for the upcoming season?

Thad:  I can’t really predict that.  If we come in with the same goals and mindset, we’re gonna be a really good team.

RT @MrUram: "If I guard him, I'm going to make him shoot." Joel Embiid was asked by Allie LaForce on @NBAonTNT about facing Ben Simmons t…
h J R
philadunkia