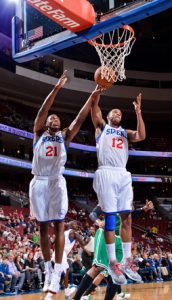 If winning mattered in the preseason, the 76ers would be off to a more than promising start; especially after demolishing the Boston Celtics at the Wells Fargo Center on Monday night.

But of course, exhibition basketball is strictly about evaluation, with winning being a benign afterthought.  After all, the Celtics were without Kevin Garnett (allowing Spencer Hawes, who had 17 points in 17 minutes, to look like Moses Malone).  Meanwhile, the Sixers have yet to see their new centerpiece, Andrew Bynum in action, as his knee continues to be injected (legally, of course) and recover.

Though, even with Bynum’s absence, the 7-6’s preseason performance has shown why they are in need of the big man’s service.

In the most simplistic terms, it still has been difficult for the Sixers to score in their set offense.  It’s just ugly to watch at times.  The struggle for shot creation has carried over into a brand new season as they have no dynamic offense weapons to create space and scoring opportunities for teammates.  While, they’ve continued to thrive on fast break opportunities, they continue to look sluggish in half court situations.

That’s why Bynum’s presence is beyond anticipated, as he will just make it easier for everyone, including Jrue Holiday.

It’s Jrue Holiday that has been most impressive throughout the first 3 games.  He’s making all the right decisions while limiting the turnovers.  The question has been asked: Will Holiday be a distributor or a scorer this season?  The answer seems to be both.  He looks to be in total command of the offense.  He only took 7 shot attempts against the Celtics but he made beautiful passes to cutting teammates and certainly was looking to set up others.  Yet, against Orlando he doubled that number of shot attempts and put on an outstanding scoring display (12-14 on FGAs for 27 pts.).  The key for him is learning the difficult balance between when to pass and when to be selfish.  It looks like he’s beginning to master that art.

The same impression can’t be said for Evan Turner.  Despite a much better effort last night — 10 pts., 4 rebs., 3 dimes ad 3 steals (+12 on the night) — and a look of overflowing confidence as he knows that he is the benefactor of Andre Iguodala’s departure, Turner’s play doesn’t look improved.  He certainly doesn’t look like he’s ready to go to the next level.  In my opinion, Turner is just trying to do too much.  There’s too much dribbling, too many forced shot attempts, and not enough flow and control.  Again, adding Bynum to the lineup should change that (well, one can only hope).

As Turner continues to try to find his game, the Sixers may have found their backup point guard, and no it’s not Royal Ivey.

Villanova product (Roman Catholic alum as well) Maalik Wayns  has been a nice surprise this preseason (9 pts. & 8 dimes last night).  If you followed Wayns at Nova last year, you know he rarely looked this good at any point during a roller coaster last season under Jay Wright that caused his draft stock to plummet.  His speed is beyond dynamic and his fearlessness is admirable.  But, at times his speed can get in his own way as he seems to go faster than what even he can handle and plays out of control.  That’s no surprise for a rookie just trying to prove himself, and make the roster.  Yet, it’s his devastating quickness, something that no one else on the team possesses, that will likely earn him a spot and playing time

The bench back-court combination of Wayns and Nick Young (18 ppg. so far) could be lethal.  It is non-stop speed and instant offense.  Everyone knows, and so far everyone has seen that Young will shoot anytime, anywhere, and he simply doesn’t give a hoot, holler or whatever noun you can think of.  Based on Monday night’s fan reaction, Philadelphia is going to love him.  Dunking over the entire Celtics’ team will help his reputation just a tiny teeny bit as well.

The other Young looked good in his own right on Monday night.  Thaddeus had 15 points and grabbed 6 boards. Though, it will be interesting to see what his role will be in Bynum joins the lineup.

There have been no shocking or wildly unexpected performances thus far, but one thing that has been odd is Jason Richardson’s lack of production in his first 2 outings.  It’s possible that the veteran is coasting because it is the preseason, so we probably shoudln’t press the panic button yet.  Still, he is most likely penciled in the starting lineup when the regular season begins and that is concerning given what we have seen so far.  It’s only two games (with a new team and in a new system), but J-Rich has a combined 11 points, has only attempted 11 shots and is shooting 30% from the field.  One would think he would be a vital part of what the Sixers are trying to do offensively in 2012-13, so it’s vital that he gets it going soon.

But after all it’s only 2 games – 2 meaningless games at that.

Ultimately, it will be what Bynum does or doesn’t do that decides the Sixers’ fate this season. But at least, the exhibition season (well, the 1st 3 games) is proving that 7-6 will be fun to watch and highly competitive whether Bynum’s knee can hold up or not.

RT @LaurenMRosen: It’s been a great season for #content But I believe the hydration content hasn’t gotten enough love So as the final thi…
h J R
philadunkia

RT @Ky_Carlin: Al Horford says he’s been given the he indication that he’ll continue to come off the bench. He adds that it’s best for the…
h J R
Follow philadunkia