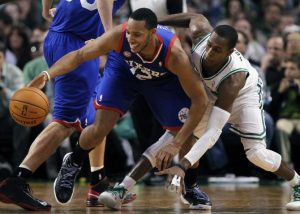 Identity: Some teams have it, some teams don’t and some teams are still in search of it.

The identity of the 2012-13 Sixers was summed up pretty well by coach Doug Collins after their latest loss Tuesday night to the Minnesota Timberwolves.

“This team hasn’t been through anything together, so I don’t know who we are,” Collins said. “The adversity we’ve had have been injuries. But I’m talking about losing. And I worry about that. I worry about getting punched in the mouth a few times and how we’re going to react. That’s a huge concern to me. … I don’t know about this team yet.”

Jason Richardson added to Collins’ comments, but also said that despite not knowing each other very well the Sixers are obviously still a good team.

“We try to stay together, that’s the main thing,” Richardson said. “We were outplayed. Yes, we are a very new team, we don’t know each other real well, but we have a 10-8 record.”

Figuring out who these Sixers really are as a team isn’t hard if you’re simply going by a talent standpoint. They have one of the top young point guards in the game in Jrue Holiday who’s playing above the level most expected him to play before the season began. They have a shooting guard in Jason Richardson who has played more than serviceable both on offense and defense for most of the early season. They have a small forward in Evan Turner who has matured into a rare five-tool player who can score, rebound, pass, defend and man the point when necessary. They have an undersized but match-up nightmare in Thaddeus Young who can beat you on offense with crafty moves in the post or out in transition with ease. They also have the sharp-shooting Dorell Wright and speedy Maalik Wayns on the bench who at any moment can affect the outcome of a game for the Sixers.

As for the rest of the team, things have not been pretty. Spencer Hawes, Lavoy Allen, Nick “SwaggyP” Young and Kwame Brown have been severe disappointments. When three of the four play the center position, you know you are destined for a tough season.

With an already undersized Thaddeus Young at power forward, teams have been exploiting the Sixers lack of a physical post duo as they’ve attacked the rack at will. Lately you’ve seen bigger teams like the Pistons and Timberwolves use to pick-and-roll to perfection and absolutely dominate the Sixers.

Nick Young, while he’s averaging nearly 15 points a game, is shooting a career-low 38 percent from the floor which isn’t helping for a team ranked 24th in the NBA with a 43 percent team percentage.

It’s as clear as day: The Sixers need a physical center or forward who can both rebound and defend.

Kwame Brown at this point is immovable, literally and figuratively, but Hawes, Allen and Young could all be attractive trade-bait for suitors around the NBA.

What would it take to get a J.J. Hickson from Portland or a Demarcus Cousins from Sacramento? What about a lower tier player such as Glen Davis from Orlando or Reggie Evans from Brooklyn? It sure won’t be easy for the Sixers front office, but if a deal is done I’d have no problem departing with any of the names just mentioned.

The Sixers face the Boston Celtics tonight in the first game of a back-to-back against Boston. Boston is easily the Sixers’ biggest rival in the Atlantic Division and they currently hold the same 10-8 record as the Sixers. Unless Allen, Hawes or (gulp) Brown can step up on the glass and on the defensive end it will be tough treading for the team to come away with two victories.

Guards and forwards of other teams aren’t afraid to attack the basket against the Sixers, because they know there’s a good chance they’ll either be fouled or get an easy two against the “Sleep Number Bed” Sixers post defense. Expect Rajon Rondo to exploit this and avenge his teams 106-100 loss to the Sixers back on Nov. 9 (in a game which he had 20 assists).

It’s safe to say at this point that Allen, Hawes and Brown should be playing for their jobs, as well as Nick Young.

The highly active new Sixers ownership isn’t going to let their franchise fall when it’s clear they should be winning. If the Sixers lose both games and fall to a season-high four-straight losses, expect changes.

This back-to-back is a defining moment for the season, and the way in which coach Collins called out the team in their most recent loss to the Timberwolves is evident of that. He’s asking them to prove themselves and play the way he knows they can and should be playing. For a player like Hawes, the ball is in his court. As for his playing days in Philadelphia, the ball may not be there much longer.