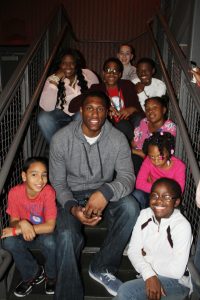 What’s the difference between professional athletes in the United States and United States citizens?  The reality is that they’re one in the same, but for young fans of the NBA often times that may be too hard of a concept to grasp or to understand.

As a young fan you see these towering figures who can soar through an arena sky like a model airplane, eventually landing gracefully to the hardwood until the next flight.  You see them on television, in movies, in video games, in commercials, on billboards and maybe even on your favorite cartoon.  It’s hard for a young fan to comprehend that these men were once just like them – a small child watching their heroes take the court in a game in which they love.  They once had posters which lined the walls, jerseys of their favorite players hanging in their closets and sporting cards in their drawers which they were hoping to one day have signed.

A couple years ago I watched the documentary More Than a Game, the story of LeBron James’ youth and rise to stardom.  In the documentary James takes you to one of the projects that he grew up in as a child.  He shows you his old bedroom and points you to the walls of the room in which he used to hang his posters.  On the wall he shows you where he had his Michael Jordan section, his Allen Iverson section, his Kobe Bryant section and his Tracy McGrady section while using his hands to illustrate the dividing lines between them.

This scene brought me back to my own childhood where I remembered doing a lot of the same things.  Throughout my bedrooms over the years I had posters and shrines for two of my favorite players Michael Jordan and Allen Iverson which I was always looking to expand upon.  In a way the scene brought LeBron James down to my level for a second and I could see that even though we are two different people in two different worlds, what we enjoyed most in our childhoods wasn’t all that different from one another.  We were two kids with big dreams who used our on-court idols as symbols of people who were able to reach their own.

On Friday at Sandy Hook Elementary School in Newtown, Connecticut, 20 children from the ages of six and seven were shot and killed. 20 innocent dreamers with their entire lives ahead of them, unable to try and fulfill their dreams like LeBron and I had done in the past.  They never had their chance to become a person who was looked up to. They’re all symbols now, but not symbols that bring joy and desire.  They bring the country sadness and unrest, thinking about what each and every one of them could’ve become.

As Barack Obama said in his speech Sunday night in Newtown, “They lost their lives in a school that could have been any school; in a quiet town full of good and decent people that could be any town in America…For those of us who remain (after this tragedy), let us find the strength to carry on and make our country worthy of their memory.” 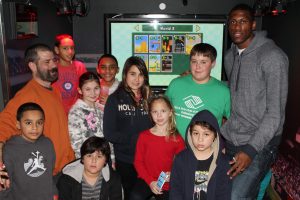 I can’t think of a better way to make our country worthy of their memory than by protecting the kids who are in the most danger today. These are the kids who are in the line of fire, but who are unable to avoid the situations which are happening around them.  They’re not locked in a classroom with an imminent death like the tragic shooting in Connecticut, but rather locked in a neighborhood where shots are fired on a nightly basis while having no way to escape.  According to Philly.com, Philadelphia has had one murder every 24 hours, 10 min since January 1, 2012.  That is one of the major issues that Sixers forward Thaddeus Young is hoping to change.

On Saturday in South Philadelphia, Young held his 4th Annual Thad-A-Claus Christmas event at Chickie’s and Pete’s to raise money for the Young For Youth Foundation.  The foundation focuses on the education, health and wellness, athletic, personal growth, responsibility and professional development of at-risk youth in the Philadelphia, Memphis and New Orleans areas.

Young was in Indianapolis on Friday to play the Pacers and said there was one thing on his mind when he heard about the incident which happened in Connecticut.

“There’s certain times where you have to go home and talk to your family and tell them how much you love them and miss them everyday.  This was one of those times,” said a concerned Young.  “It’s so tragic.  You can’t see things like these coming and when they do come you’re just kind of at a loss for words.”

Young welcomed his first child Thaddeus Young Jr. into the world back in July of 2010. He was glad to be home with him and his wife on Saturday and he was equally as glad to be able to spend some time with the kids from the community.

“It’s always a great time when you’re home with the family, but this time was especially meaningful to me,” said Young. “I’m happy to see my wife and my son and just to chill out and relax.  I’m also happy to spend some time with the kids that came out today.  They’re all excited to see me and my teammates.  It will be fun to play some video games with them and just to make them smile.” 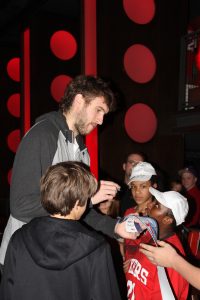 Kids from the Philadelphia area swarmed Young for the chance at a signature for their collection or a picture with their idol that they could keep forever.  The same went for Young’s teammates who arrived such as Evan Turner, Jason Richardson, Dorell Wright and Spencer Hawes.

“This is the city that embraced me when I first came into the league,” said Young.  “They showed me a lot of love and now it’s time for me to show my love and pay my dues to them.  I appreciate every person in this city and I’m just trying to keep doing what I’m doing in terms of coming out and raising money for underprivileged kids or doing things to help the families in the area.  It’s all fun but at the end of the day it’s real.”

It was a good time for the players to show their love to fans and to show the mortal side to themselves that young fans don’t ever get the chance to see.  They had on their winter coats instead of uniforms, they lined up in buffet lines for food like every other person there and they played the kids as their favorite team, the Sixers, in NBA 2K13. There was no glitz or glamor about it, the players were just having fun and they filled kids minds with positive thoughts instead of the violent images that some of the innocent children in Connecticut were subject to the day before.

Around the NBA, players paid homage to Sandy Hook Elementary.  Kevin Durant used a sharpie to write Newtown, CT on his sneakers for his game Friday night against the Kings.  On Twitter, players sent their thoughts and prayers to the victims and the families. Some members of the Heat stood with their children on the court before their game Saturday night against the Wizards.

It was an outcry of emotion not really seen throughout the sports world since the September 11, 2001 terrorist attacks on the World Trade Center towers in N.Y. and the Pentagon in D.C.

Losing a family member was something the NBA family actually dealt with as a whole just last month.  On Nov. 25 Rockets coach Kevin McHale lost his daughter Sasha in her fight with lupus, an autoimmune disease where the immune system attacks the body’s cells and tissue.  On the eve of the tragedy at Sandy Hook, McHale was coaching against the Boston Celtics, an organization where he made a name for himself as both a player and executive.  When the horn sounded, Celtics forward Kevin Garnett made his way over to console McHale, knowing the emotions he must’ve been feeling. It was a testament to what the NBA is really about. 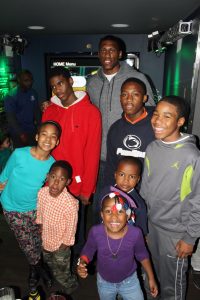 “It says something about our brotherhood and our relationship between the coaches, the front office and the staff of the NBA,” Young said regarding Garnett’s embrace with McHale.  “We’re all together and we’re all in this together and when one goes down, we’re all a family where one goes down for each and every one of us.  It’s a great thing to see guys embrace their coaches, mentors and guys who helped them pave their way to success.”

It’s the brotherhood that made players come together this weekend and a brotherhood which will continue to affect this countries youth in a positive way.  As long as players like Thaddeus Young continue to use the position they’re in to make a difference, lives can be saved and dreams can be fulfilled.  All it takes is a little initiative and after what happened this weekend, it could be a foreshadowing of things to come.