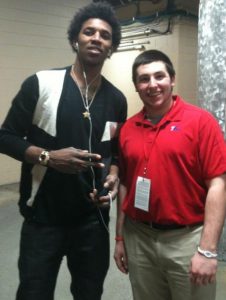 The 76ers are now amidst their first three-game winning streak since November 25-30, and outside of Andrew Bynum’s continued absence and Thad’s hamstring strain, which will put him out the lineup for three weeks, a number of things are going well for the NBA team that inhabits the Wells Fargo Center.

All-Star point guard, Jrue Holiday, continues to play well.  A rejuvenated Spencer Hawes is finely contributing on a nightly basis.  Nick Young continues to thrive as a starter.  Lavoy Allen has found a pulse and Sixers ball boy Tucker Colton (a.k.a. Tuck Money) is blowing up on the Internet.

That’s right, in the last week the Sixers have put together their first significant winning stretch in over two months and the most popular Sixers topic on the web is the team’s ball boy (@tuckcolt) and his crazy mic skills.

Philadunkia scribe Jake Fischer recently caught up with Colton (pic at left with Swaggy) and learned about the ins and outs of being a NBA ball boy as well as Colton’s music career.

Philadunkia:  By day you are a Drexel University college student, but by night you have a job sitting behind the Philadelphia 76ers’ bench as a ball boy.  What’s it like working for the Sixers, a team you grew up idolizing?

Colton:  Man, I absolutely (love) working for the team’s equipment manager, Scott Rego.  He is a really great guy and is really good at what he does.  He’s been around the league and team for a while and is one of the best in the NBA.  It’s been a lot of fun working under him.  In that type of environment I’ve just been able to go out and have fun.  I really look forward to games.  If you’re diligent and respect the protocols of the team, you’re going to continue to have a job as a ball boy.

Philadunkia:  Describe your daily routine on game day leading up to tip off.

Colton:  If it’s a 7p.m. game, I have class during the day.  So I’ll drive over – I have my car on campus – and I get to the stadium around 3:30 in the afternoon.  I like to get there at 3:30pm even though we’re supposed to be there at 4p.m, since I have a lot of responsibility being behind the bench with the water.  I get there before the players who get to the stadium around 3:45p.m.  I have to prepare the coolers, one for Gatorade and one for water.  I then set up the court with mops, Slipp-Notts, so players can wipe their sneakers on them.  Then, I, along with the other ball boys and assistant coaches, rebound for the team from about 4p.m. to about 6:30p.m.  Then we do some specific ball boy prep.

Philadunkia:  What is it like being in the stadium during pregame, when nobody is in the arena?

Colton:  It’s really quiet.  All you hear is the basketball.  The players come out around 4p.m. and they all have their own routine. While their warming up, nobody talks so all you here is the bounce of the ball and the swish of the nets.  It’s really, really cool.

Philadunkia:  What is the general function of the ball boy group as a collective unit?

Colton:  Well, there are 12 ball boys that work each game — with six on the away team’s side and six on the Sixers’ side.  I always work on the Sixers’ side.  At 6:30, following all those warm-ups, we go eat, we have a meeting and discuss what are individual roles are for that game.  Then at 6:45 we go out and rebound for the final warm-up.  But, when the game starts, we all report to our individual spots and get to work.  I’m behind the bench, giving players water, making ice bags and preparing heat packs. Sometimes a few guys are back behind the scenes working the locker rooms.

Philadunkia:  How late are you in the stadium after the game?

Colton:  After the Sixers win [laughs]?  After the game I have to bring everything back into the locker room that I set up pregame. Usually we are out of there around 10:30p.m.  That’s after we clean up all the jerseys, the warmups, make the locker room look nice.  We just have to make sure it’s organized.

Philadunkia:  During the beginning of this season Andrew Bynum’s hair-dos were making big news and you were constantly shown on ESPN or Comcast SportsNet sitting next to the injured Sixers center.  What’s Bynum like as a person?

Colton:  Man, Andrew Bynum is awesome [laughs].  He’s awesome and I can’t wait for him to come back and play.  It’s a shame he’s not playing.  He’s just easy going about everything; he’s really funny.  We talk about everything from his high school days to how he wants to be out on the court. He always says how he wants to be on the court really badly.

Philadunkia:  How many more years do you expect to be a 76ers ball boy?

Colton:  I love it.  I love the Philadelphia 76ers organization.  Hopefully, I’ll be able to do this for as long as I can, at least throughout college, and then maybe one day there will be an open position higher up in the organization that I could potentially fill.

Philadunkia:  Is it true that you just got hired as the new Phillies bat boy as well?

Colton:  The old bat boy works with the Sixers.  So, in the process of working with him, I asked him if I could get his boss’ number. I contacted the Phillies equipment crew, went through the interview process and fortunately got the job.  I’m really looking forward to working with the team this summer.

Philadunkia:  Outside of sports, you’re also getting into the rap game.  Evan Turner and other Sixer players are constantly Tweeting about your new mix tape, For The People.  Is music your true passion?

Colton:  I’m just joking around rapping.  I rap by the name of “Tuck Money”, so a lot of the players call me by that now [laughs]. It’s purely for fun.  I only rap when people ask me to.  I know I’m not that good [laughs].  All of my raps are for people that ask me to rap for them, hence the title.  I knew I had the time, so I figured, why not?  Tuck Money Gang Or Die [laughs].  I have a lot of fun with it.

Philadunkia:  Seriously, the players seem to love your skills.  So do you think that creating / recording hip-hop is something you will seriously look into doing on the side?

Colton:  Maybe.  The guys on the team are all really great and they’re having fun with it.  Over the past few years, I’ve been able to develop a relationship with them through my music.  They’re just 23, 24-year-old guys who like rap and to have fun.  I definitely think I could make some more mix-tapes in the future.  It’s really time-consuming but I think I could definitely make a few more.

Philadunkia:  As we all know former Sixer Louis Williams is something of a recording artist.  Have you ever thought of hitting him up for some advice on how to take this hobby to the next level or sending him some of your tracks?

Colton:  No, I have not talked to Lou Williams.  However, Evan Turner went to middle school with the New York Knicks’ Iman Shumpert, who recorded a rap about the Knicks earlier this year.  So he knows about the rap game and Shump challenged Evan to get a track going.  With that, I know Evan thinks it would be cool to do something together and it’s looking like he might make a future appearance on a potential upcoming mix-tape.

Editor’s Note: You can listen to the mix-tape all of the Sixers are tweeting about by clicking here.