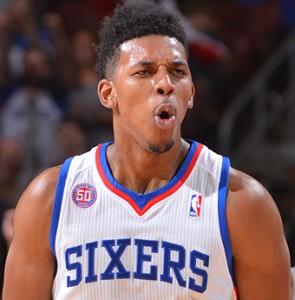 There’s a lot of reasons to like Nick “Swaggy P” Young.  After a miserable start to the season, Young found himself riding the almighty pine.  He registered five DNP’s from coach Doug Collins and fans became uneasy with the idea of giving any kind of minutes to Young for an already offensively challenged team.

Then January rolled around.  Young strung together a few solid performances off the bench, even though the Sixers still piled up losses, and coach Doug Collins felt like it was time to make a switch.

He inserted Young into the starting lineup and the Sixers have gone 5-2 ever since.  He’s had four games of over 15 points during that span, including 20 in a 97-80 domination of the Knicks.

Over the weekend, Philadunkia scribe Jeff McMenamin, got a chance to talk to Young about his recent success as well as his intricate personality that fans are getting to know and love.

Philadunkia:  First off, how devastating is Thad’s hamstring injury?  How tough is it going to be without him for the next few weeks?

Young:  Thad’s a huge part of the team.  He’s got those big muscles and he’s so determined and scrappy.  We need someone that can dive on the floor for those loose balls and bring that intensity to our team.  Without him we all have to step up big time.

Philadunkia:  It was announced last week that J-Rich will miss the rest of the season, how devastated were you guys by the news?

Young:  We were very devastated.  I call J-Rich the ‘Super Vet’.  He’s somebody that can show you the ropes a little bit.  He’s been in the league a long time and he keeps you confident on the court.  He’d always tell me, ‘shoot Swag that’s what you do’ and that’s something that you need as a player.

Philadunkia:  Obviously the injury gives you more minutes the rest of the way, what do you hope to accomplish with that extra tick?

Young:  My goal is to continue to play the way I’ve been playing recently.  I’m trying to do as much things as I can to help the team while I’m out there.  I want to just play my game through playing defense and hitting shots more consistently.

Philadunkia:  Outside of the last two games, you’ve performed great as a starter.  You averaged 17 ppg during your first five starts in 2013 and the team was 4-1.  Was it confidence that made the difference or did you just feel a little more comfortable out there?

Young:  A little bit of both.  Mainly it was just going out there and having fun.  Not putting too much stress on stuff and buying into what the coaches are telling me.  I’m trying to make the best of my abilities when I’m on the court.

Philadunkia:  What does it mean to you that Collins gave you the opportunity to start?

Young:  It means a lot.  I was ready for it.  To come from having some DNP’s to starting I really just had something to prove and I still do.  Being a starter comes with a lot more responsibility.

Philadunkia:  Another guy you’ve been able to start with is Spencer Hawes.  You guys share lockers next to eachother.  Talk about the bond you guys share with one another.

Young:  That’s my guy.  We’ve been hanging out a lot.  We always mess with eachother.  In games we’ve started to work the pick and roll with eachother.  We know where we both like the ball and we’ve tried to use that to our advantage.  He’s tough to stop when he can knock that jumpshot down.  The other night he even dunked on somebody.

Philadunkia:  You guys also have some of the best personalities on the team.  Do you guys kind of feed off of eachother when it comes to that?

Young:  He’s a joy to watch and hang out with.  I like to joke around a lot with people and he makes it easy.  He doesn’t back down, he likes to shoot back at me.  Sometimes I don’t feel like joking and he has to keep shooting at me!

Philadunkia:  Hawes said his mullet was better then your new cut. What do you say to that?

Young:  (Laugh) I liked the mullet.  I think he has to try something else.  The other day he had letters and drew the whole Sonics logo on his head.  I was like, ‘ok Spence that’s hip!’  I didn’t know Spence was that hip man.

Philadunkia:  Did you guys make fun of Spencer when Barack Obama was re-elected?

Young:  Definitely (laugh).  Spence doesn’t back down though.  A lot of times D. Wright and Royal Ivey will team up on me and they throw Jrue in there too.  They’re always cracking jokes.  I’m by myself in there a lot.

Philadunkia:  Where did the name Swaggy P first come from?

Young:  Just playing around with my friends back in the day.  A lot of guys used to call me that and I just kind of ran with it.  But I threw the P in there.  The P is a mystery.  I can’t give you my secret.

Philadunkia:  Was wearing leopard skin loafers in the locker room a few months ago an example of your swag?

Young:  That’s all Swaggy P right there.  I think Swaggy P really blew up in the playoffs last year when I wore all the Versace shit.  That’s when people really started to take notice and now it’s just one of my tags.

Philadunkia:  When did you start with these interesting fashions?  What was different in the playoffs last year?

Young:  I’ve been doing it for a while, but I just never had the opportunity to broadcast it.  In the playoffs there’s just cameras everywhere and that was my first time being in the playoffs.  I just thought to myself, ‘Let me bring some flavor to this.  I’m in LA. The stars are out.  I’m in the playoffs for the first time.  Let me do something,’ and then it just took off.

Young:  On the court I’m a big fan of the new Kobe’s.  Off the court I wear pretty much anything.  My most cherished pair I’d say are the Jordan III’s and I also like Vans.  I’ll throw Vans on all the time.

Philadunkia:  In Washington you and JaVale McGee were best buds and did a lot of these antics together, do you miss having him around?

Young:  I still keep in touch with JaVale and some of those guys.  I saw he had a big dunk the other day.  He put it off the backboard and then started cooking.  That thing was nasty.  That’s JaVale though, you gotta take the good and the bad with him.

Philadunkia:  You had a big “P60” dunk yourself against the Magic last week.  Was it cool to do that in front of Philadelphia native/movie star Will Smith?  Did you get a chance to speak with him?

Young:  He left at halftime but he said something to me before the game.  I felt good doing that in front of the Prince.  That’s the Fresh Prince right there.  That’s someone I used to idolize as one of the coolest dudes.  He had all the shoes back in the day, all the cool pairs.  It felt really good to see Will Smith.  It was the first time I’ve seen him and he knew who I was.  I was really excited.

Philadunkia:  On Twitter during the game, people were saying you were kind of like the Fresh Prince of Philly coming from LA to Philly instead of Philly to LA like Will Smith does in the show.  How do you like that nickname?

Young:  That’s tight.  I like that one.  I didn’t know they were thinking that.  I’m gonna have to use that one.

Philly’s Nick Young throws down the 360 dunk in front of the Fresh Prince from West Philly tinyurl.com/awrh5kstwitter.com/Ballislife/sta…

Philadunkia:  How excited are you for Jrue being in the ASG?

Young:  That’s big.  That’s really big.  I know he’s very excited, he works hard, he’s the court general and he’s been playing great this year.  To see it pay off is really a blessing for him.  He’ll remember it forever.

Philadunkia:  What will the second half bring for the Sixers with Bynum returning and Thad being back soon as well?

Young:  With Bynum, we shouldn’t lose with that big fella.  But I’m not trying to put pressure on him!  We just gotta catch some teams.  Boston’s playing great right now and don’t look like they’re slowing down.  We’ve just gotta catch somebody and get back in the running by getting a little winning streak going.

Philadunkia:  How far do you see this team going if it does slip into the playoffs?

Young:  It depends on how quickly we come together. In the playoffs anything can happen.  Last season with the Clippers we were down 27 to Memphis in the fourth quarter and I helped bring us back to win that game so anything’s possible.  We just have to get in there. Like the Sixers’ series with Chicago last season, nobody thought that could happen but sure enough it did.