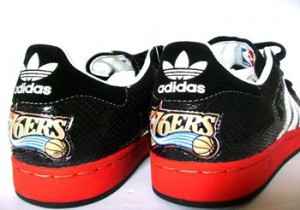 There are just two-days remaining before the start of the 2009-10 NBA season for our Philadelphia 76ers and after all the changes that went on with the squad this past summer and a preseason filled with unbelieveable highs and disturbing lows, we’re sure a lot of you out there in Philadunkia nation have no idea what to expect from the Sixers this season.

Over the next couple of days we’re going to try and provide some clearity for you on this Sixers team by previewing the upcoming season in muliple formats.  We’ll start by presenting the 2009-10 TrueHoop Network Season Preview of the 76ers, which we assembled with some help from our friends in the distinguished THN family.  We believe you’ll find the unique format of this preview entertaining and most importantly very informative.

(The consensus win total prediction of the TrueHoop Network bloggers … and the best hopes of Philadunkia.com.)

(The sun is out. The seas have parted. The basketball gods are shining upon us!)

After the 76ers’ embarrassing exit from the 2009 NBA Playoffs at the hands of the Orlando Magic, most “experts” theorized that the 76ers would be very active in the offseason trade and free agency markets. After all, GM Ed Stefanski had just watched his upset-minded 41-41 team get exposed by a much more talented and better-coached Eastern Conference foe. So if the Sixers were to take that next step and move into the elite of the East, a major change or two seemed to be in order. That theory made good sense to us as well.

Those experts and we here at Philadunkia sure were wrong, as the Sixers made only one trade this offseason and their activity on the free agent market consist­ed of letting free agent point man Andre Miller walk to Portland.

The Sixers’ relative inactivity and Miller’s exodus aside, the 2009-10 Sixers still havea lot of upside. The extremely effective running game that has propelled the young and athletic 76ers to the NBA playoffs in the last two years will now be complimented by a significantly improved low post game in the half court. Thanks to the return of bigs Elton Brand and Jason Smith from injury and the continued improvement of Marreese Speights, the Sixers should be a legit threat this season in the half-court offense.

Additionally, the Sixers now have a head coach in Eddie Jordan who actually has a half-court offensive system (Princeton offense) to fall back on when the run-n-gun gets bogged down or the opponent forces the Sixers into a slower tempo contest. Having a coach who believes in such a system and can teach it to his players is a vital start to improving this team’s offensive fortunes.

As a bonus, Ed Stefanski addressed the team’s desperate need for a quality jump shooter by bringing in sniper Jason Kapono. Kapono is a career 45 percent shooter from behind the arc and 44.7 percent from the field. His presence will lead to a huge improvement in the Sixers’ ability to bang down jumpers.

With the Sixers devastating fast break featuring Thaddeus Young, Andre Ig­uodala and Louis Williams in addition to significant improvements in the interior game, coaching and outside shooting, how could people possibly say the Sixers will suck in 2009-10?

The words “Elton Brand is back” never meant less.

– Matt McHale / Bulls by the Horns

(A 140-character insight into the soul of the team.)

“I can’t help imagining, Vick, McNabb, Rollins and Iverson all playing in the City of Brotherly Love……..Picture That!” – Allen Iverson

(The single best quote concerning the team during the last 12 months.)

“It ain’t about veterans. The coaches are respon­sible for guys [being] prepared and playing,” he said. “They have to hold guys accountable. It’s been that way all year, so you couldn’t expect anything differ­ent…[The lack of that] has bothered me, and I’ve told them it’s bothered me, that it’s something you’ve got to deal with,” he said. “When you see the lack of effort, the lack of concentration, the lack of being able to get things done, and to stick with the same thing, to me you’re just trying to play guys, and I don’t feel good about it.”

The 76ers ranked 24th in the League in shooting and 25th in the League in defensive rebounding. That’s right, Philadunkia’s home team struggles to hit shots, open or defended, while on the other end of the floor they can not limit the opposing team to one-and-done trips. So how on earth did the Sixers win 41 games last year? They ranked 2nd in the NBA in offensive rebounding, 2nd in forced turnovers and 4th in free throws.

Also of note, Andre Iguodala led the Sixers in scoring at 18.8 ppg. while shooting 30.7 percent from the 3-point line. Only one team in the Eastern Conference had a leading scorer with 200 3PAs who shot a lower percentage from deep – Devin Harris, who shot 29.1 percent from 3’ville for the Nets.

(Down a single point with 9.2 seconds to play in a must-win game. What’s the play?)

The 76ers are down one, 9.2 seconds to play, must-win game…In 2008-09, the Sixers would’ve isolated Iguodala at the top of the 3-point line and let him do his thing until he eventually settled for a long range J which had a 30 percent chance of finding the bottom of the bucket. Those days are over. Our play begins with the idea that with the first and second options, we’re looking to secure ourselves either a high percentage field goal attempt or a very solid chance to end up on the free throw line. So with that philosophy in mind, we break the huddle and…

On the same side of the court as the in-bounder (Jason Kapono), Andre Iguodala lines up in the high post area and Elton Brand takes up position on the blocks. Iguodala gets himself open and the inbound pass goes into him. He quickly puts the ball into Brand in the low post and the game is in # 42’s hands. If Brand believes he can get to the tin then he goes strong and either gets the bucket or draws a foul and gets two free throws.

If Brand doesn’t have a clean shot, there are other options. Kapono can set a back pick on Iguodala’s defender, allowing Iggy to slash down the lane. Brand can drop a pass to a slashing Iggy for the lay-in or a foul.

If Iguodala is covered on his cut move, then Kapono’s defender is most likely providing some help on Iggy, which should leave Kapono (option #3) wide open. Brand pitches the rock out to him and odds are that Kapono knocks down a jumper.

One play, three ways to win. Now that’s how you coach ‘em up.

(The fan favorite the crowd will be chanting for to see some action.)

Allen Iverson. A great number of Philadelphia fans have a fever and the only cure is more…Iverson. So when the 2009-10 Sixers play sub-.500 ball for most of the year and people are furious that Ed Stefanski did not bring home the Philly sports legend known as “The Answer,” the chants of “We want Iverson!” will echo throughout the half-empty Wachovia Center.

(The single biggest spreadsheet issue hanging over the team.)

We refuse to believe the glowing reviews Samuel Dalembert has been getting this preseason from everyone involved with the Sixers and thus the travesty of a deal that Billy King gave to Dalembert remains easily one of the worst contracts in NBA history. Hopefully this season Dalembert, his inflated self-worth and his contract will be dealt for a couple of expiring contracts and some much-needed cap space.