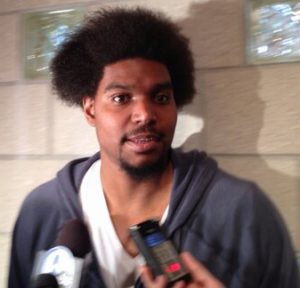 After sustaining serious mental and emotional damages from a carnivorous herd of media members at the Sixers PCOM practice facility, the 2012-2013 version of Andrew Bynum, along with his knees, is now for done for the season, the ailing center announced Friday.

“It’s getting really late [in the season],” the 7-1 nearly 300-pound center told reporters in regards to appearing on the court.  “I don’t know if I will play.”

As many have speculated for months, Andrew Bynum will most likely never play for the Sixers this season, as his deteriorating knees have now apparently cost him the 2012-13 just as they have done to the 76ers.  Bynum, who had practiced with the team for the first time just seven days prior to this horrific announcement, reported that his knees experienced swelling following that practice.  However, they most likely did not swell as large as many 76ers fans’ hearts did Friday afternoon, considering that for Bynum, it’s still all about the money.

“Being healthy is more important than everything else,” Bynum also said at PCOM.  “If I am healthy, I’ll get a deal.  I have to be able to play and I need to get to the point where I’m healthy to play.”

Thus, after a thorough research and advanced statistical analysis, Philadunkia has concluded the above statement reveals that money has played a huge role in the death of Bynum’s 2012-2013 season, by the transitive property.  Essentially if being healthy for the long run is most important to Bynum, but getting a deal is the result of being healthy, a max contract is the foremost subject on Bynum’s mind.

However, while in this state of critical condition, scientists are still investigating the potential for a recovery by this unable-bodied 25-year-old in the future beyond this current season.

“They just grew cartilage in a petri dish,” Bynum told reporters.  “Scientists are looking at it.  They’re going to come up with something.”

Even if scientists fail to “come up with something” to help Bynum’s knees, one thing is for sure: the Sixers’ front office has a plan in place for this team’s future.  Unfortunatley if you believe what has been coming out of the Sixers front office all year, that strategy remains Plan A and “A” stands for “Andrew”.

Whether that is a good or bad thing is still to be determined.

RT @therealmikekb: The #Sixers could have some interest in trading for Victor Oladipo if the #Pacers make him available. Question is obviou…
h J R
philadunkia

RT @TheSteinLine: The push for a Christmas Day start to the 2020-21 NBA season, which would naturally please the league's TV partners, is g…
h J R
philadunkia