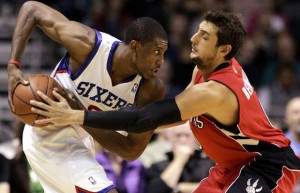 Well, it’s finally here.  That’s right, tonight is opening night for the 76ers as they tip off the 2009-10 NBA season against the Magic down in Orlando.  We thought it would be a tremendous way to wrap up our three day long 2009-10 Sixers preview by posting an interview with the Sixers rising star, Thaddeus Young.

After all, we can write all the opinions we want and link to all the expert predictions we can find, but we’re confident you’d rather hear about how Philadunkia’s home team will perform this season from one of the guys actually wearing the Sixers new retro uniforms.

We figured no player is more qualified to give a no holds bar evaluation of the 2009-10 Sixers then Thad.  The explosive wingman has played for three different coaches in his three years with the Sixers, so he can speak to what type of coach Eddie Jordan will be.  He battles Elton Brand on a daily basis at practice,  so he knows exactly how healthy EB is or is not.  Plus Thad has a tremendous basketball IQ, so he can give us the real scoop on the Princeton offense.

Read Thad’s  thoughts and predictions for the 2009-10 season after the jump. 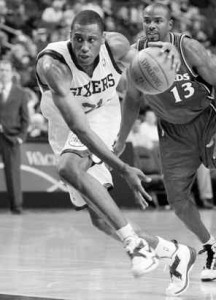 ‘Dunkia :  In your brief career with the Sixers you’ve run at the both 3-spot and the 4-spot, which position do you prefer and which spot do you see the bulk of your minutes coming at in 2009-10?

THAD :  My first two years I was like, “I really want to play the three.”, because that’s my natural position and I don’t have to battle with those big guys all the time.  But it was kind of cool playing the four because I was quicker then most of the guys that were guarding me.  But it was just when we got on the defensive end they were bumping and banging with me and that was kind of crazy ‘cause I am a little guy.  I still really enjoy playing the four.  This year I’ll be playing the three and the four again, mostly the three, but I am going to definitely enjoy it because in the offense this year the threes and the fours are pretty much the same position.  They pretty much do the same things within the offense.

‘Dunkia :  Over the last two years opponents have learned that they can not leave you alone and give you wide open looks at the tin.  So what are you seeing thrown at you by opposing defenses now in an effort to shut you down?

‘Dunkia :  This is your third year in the League.  Do you see yourself in more of leadership role for the Sixers this season?

THAD :  Yeah.  I feel that we have our two main leaders which are Andre and EB and then Louis and I come next.  As far as the dealing with the younger guys and guys our age, we’re the people they go to and talk to about issues.

‘Dunkia :  What are your honest thoughts on the Princeton offense?

THAD :  I’m adjusting to it.  There is so much stuff with the Princeton offense it’s crazy.  We’ve been going hard for about the last month now, (but) with the Princeton offense (Laughs), there’s just so many backdoor cuts, flare screens, double downs, dribble hand-offs.  All this stuff is crazy to us because we haven’t had to do so much stuff in one play.  Our plays used to just key in on one person — okay give the ball to ‘Dre or give the ball to EB, give the ball to Thad, give the ball to Louis – and let them go to work.  Now it’s pass it around, move, cut and whoever gets the first open look, he takes the shot.  We’re playing off each other now.  So we’re trying to adjust to it and it’s hard, I’m not going to lie.  But things get hard before they get easier and its’ getting easier now.

‘Dunkia :  What kind of head coach is Eddie Jordan? 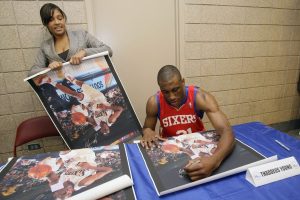 ‘Dunkia :  We understand that Elton Brand was a beast in training camp and continues to be one at practice.  Can you confirm that for us?

THAD :  Elton, he’s been  great.  He’s definitely has been a beast, but he’s been a beast his whole career.  He’s one of the hardest guys to stop in the League.  It doesn’t matter the (other) guy’s size or weight he finds some way to get his shot off and get you (Elton’s team) buckets.

‘Dunkia :  Jason Smith is another Sixer big who is returning after missing all of last year because of a serious injury and we’re hearing glowing reviews of his game in practice.  Tell us what you have seen out of Smith so far.

THAD :  I’ve always called him the “7-foot Dirk Nowitzki” because he can put the ball on the floor, get to the cup and score or dunk on you.  He can do a whole bunch of different things to get buckets.  He can shoot a little bit too.  So that’s why I call him the “7-foot Dirk Nowitzki” because he does some of things that Dirk does and he’s a legit seven feet.

‘Dunkia :  In your opinion, how has the rookie Jrue Holiday played to this point?

THAD :  Jrue has been looking great.  I think in a few years he’s going to be a tough guy to guard for a lot of guards.  He’s also one of those guys who is a lock down defender.  He believes in playing defense.  He’s a guy that can get to the cup at will and he’s very strong  once he gets in the air.  A couple of games ago he was going to the rack against one of their centers (Nets center Brook Lopez); he went hard, made the center fall and got an And 1.  I was like “Ohh!! Okay, I see. This kid can play.”

‘Dunkia :  Were you surprised that the Sixers waived Dionte Christmas?

THAD :  I was very surprised.  He’d been doing well for us and he was playing good.  He was definitely getting the offense down.  I think he was running the offense better then some of us that are still on the team (Laughs).  He’s a great guy and I hope he makes it somewhere. 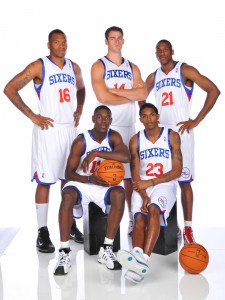 THAD :  I would say we have two x-factors, Marreese Speights and Jason Kapono.  It’s a simple fact that defenses are going to be keying in on certain guys on our team and Jason Kapono is like the best three point shooter in the NBA and Marreese is a just a baller.  He’s been a beast for us this preseason.  He’s been getting rebounds, going to the bucket and getting easy opportunities to score; dunking on people.  He’s been doing it all.  So if they can convert the chances (they get) from the attention defenses gives to other guys, we’ll have a good year.

THAD :  I’m not going to put a number on it or anything, I’m just going to let you know I think we’re going to do pretty good this year.