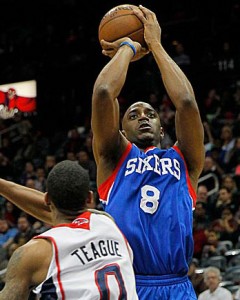 A quick Google Images search of Damien Wilkins will put his career for you in a nutshell.  In that search, you’ll see the 6-6, 225 pound swingman dawning a vast variety of the NBA jerseys.  Wilkins has been one of the lucky few who have been able to live the life of an NBA journeyman.

But recently, Wilkins, the current starting shooting guard for the 76ers, hasn’t been playing like a nomadic bench player.  In fact, the 8-year veteran out of the University of Georgia has been averaging 15.2 points, 2.4 rebounds, 2.2 assists and 1.6 steals in 29.0 minutes per game over the team’s last five contests.  Wilkins, who has started 10 games for the Sixers, has been a spark plug for Doug Collins’ team ever since he was inserted into the starting unit to replace a hobbled Nick Young.

Even though the veteran and well-respected locker room presence has been turning heads on the court for the Sixers of late, not many in the City of Brotherly Love truly know a lot about Wilkins off the court and what his thoughts have been about his first season rocking the fabled red, white and blue.

With that in mind, Philadunkia scribe, Jake Fischer, caught up with the Sixers’ cagey veteran and talked about his family lineage, the Sixers struggles this season, his days with the Seattle Supersonics and his obsession with Wawa.

Philadunkia:  You grew up having your dad, Gerald Wilkins, playing 13 years in the NBA.  What was it like living in a household with an NBA player?

Wilkins:  There was a lot of moving around and adjusting to different cities.  I had to make friends here and make friends there.  But, I was very fortunate.  It was a blessing.

Philadunkia:  Obviously, there’s great basketball lineage in your family with your dad and your uncle being Dominique Wilkins.  Coming into the league, was that a hard image to shake trying to make your own name for yourself.

Philadunkia:  What did you think were realistic expectations for your NBA career?

Philadunkia:  Well you’ve definitely been relevant over this recent stretch for the Sixers since Nick Young went down with an injury.  You’ve started a bunch of games and are really playing well.  Do you approach a game differently knowing you’re going to start versus if you’re going to come off the bench?

Wilkins:  No, I don’t.  I’ve always prepared as if I was a starter.  I always got to the gym early and always leave the gym late.  I knew at some point, when my number would get called, I would have to be absolutely ready.  It’s easy to fall into an attitude where you’re nonchalant about things.  But I’ve never been one to take things for granted.  I think that’s why I’ve been able to do the things I’ve done of late.

Philadunkia:  You have certainly played very well as of late.  What’s been the difference?  Is it just an increase in minutes or are have you developed a new pregame routine and have more confidence?

Wilkins:  It’s really a combination of all those things.  To be honest, I don’t really remember playing in the beginning of the season.  Minutes are probably the most underrated statistic in professional basketball.  When you’re out there you fall into a rhythm.  When you know you’re gonna play and know you’re gonna get the minutes, the shots just naturally come.  I just play aggressive defense, run out in transition and try to get my hands on the ball and create offense for myself and my teammates.  I’m not really doing anything different, I’m just getting minutes now.

Philadunkia:  Is that an issue with other players on the team?  Is it hard going into a game, in Doug Collins’ system, without a solid rotation and not knowing how much time you’re going to get if you come off the bench?

Wilkins:  That’s the thing with our team.  We’re not good enough to dictate minutes and have a set rotation on this team.  It’s not like we’re in the hunt for the division title and contending for a top playoff seed.  We’re not in the position to have the liberty to say who should be playing more and who shouldn’t be, with the exception of Jrue and Thad and Spencer, who’s been playing really well of late.

Philadunkia:  As part of that inconsistent rotation earlier in the season, you actually had been playing some power forward, yet you’re listed as a shooting guard.  At what position do you feel most comfortable on the court?

Wilkins:  I’m more of a perimeter player, but I’m also a basketball player.  I just want to play and be on the floor.  Coach can put me at any position on the floor and that’s the position I’m gonna play.  I might not have an advantage at that position, but at the end of the day I’m just looking to go out there and play as hard as I can.  But, it didn’t really give an advantage to me or our team to go down low against guys like Amare Stoudemire [laughs].

Philadunkia:  Coming into this season, you were fighting for a roster spot on this team.  What was it like coming into a new place and new team having to try and prove your worth?

Wilkins:  I’ve been fighting for a roster spot for the last two, three years.  Fighting is something that I strive at.  A lot of people take it for granted that contracts get given to them.  I’ve always had to fight to get there and I’ve always accepted that challenge and tried to do the best that I can with the opportunities that I’m given.

Philadunkia:  Once you were granted that roster spot, you weren’t really getting minutes at all back in October and November.  How frustrating was that night in and night out?

Wilkins:  It was definitely discouraging at times as a competitor.  I’d hope that everyone on that bench wants to play. But for me, I understood what it was.  It was just a matter of me waiting for the opportunity and staying ready.

Philadunkia:  This season for the Sixers overall has certainly been frustrating.  But, outside of Andrew Bynum, what’s gone wrong with the team?  Why aren’t you guys currently in the playoffs?

Wilkins:  Of course the Andrew Bynum situation is disappointing for the city of Philadelphia and for us.  But for us, we lost a lot of games because of lack of toughness and lack of consistency and defensive focus.  It’s a brand new roster, guys were trying to get familiar with each other.  We came up short in a lot of games that we should have won that we didn’t.  You know, we gave some games away.  But we live and we learn from those experiences and hopefully they will make us better players and a better team in the future.

Philadunkia:  It looks like the team has learned from those experiences winning  four of your last seven games.  Do you guys still have something to play for?  Are you still fighting for a playoff spot even though you’re 7 games out of the 8th spot?  Or would it be best to get a good position for the draft lottery?

Wilkins:  With the playoffs, you always think about them.  But you also have to be realistic with yourself, too.  We’ve certainly had our struggles and we are far out of the playoffs with not a lot of time to make up for those struggles.  We’re just focusing on one game at a time and trying to control what we can control.

Philadunkia:  You’re viewed as an older leader within this team.  In fact, you were on the Seattle Supersonics teams, in the beginning of your career, that Spencer Hawes watched when he was in high school.  Do you and Spencer ever talk about those days?  Did he have a Damien Wilkins jersey and look up to you?

Wilkins:  [Laughs] I don’t think he looked up to me.  Not many people had my jersey [laughs].  We’ve talked about that a couple times, actually.  We just talk about games that he remembers that I was in during the times that we were making our playoff runs and stuff like that.

Philadunkia:  Do you have an opinion on all the talk about the Kings being sold to a Seattle-based ownership group?  Would you want to see an NBA team back in the Emerald City?

Philadunkia:  What was your favorite part about living in Seattle?

Wilkins:  Definitely the Seafood [laughs].  And the fans.  The fans, again, were so great.

Philadunkia:  What are your thoughts on living around Philly?  Do you go into the city a lot?  Do you have any favorite restaurants or spots you frequent?

Wilkins:  You’ve gotta love the passion and enthusiasm that people have here for their team.  But I don’t go out.  I kinda just chill at home or I’m at the game or at practice.  I go out to eat from time to time but I’m really just chilling.

Philadunkia:  All you do is chill?  What are some of your hobbies?

Wilkins:  My hobby is basketball, man.

Philadunkia:  That’s it?  You don’t play any video games or anything?

Philadunkia:  Is Wawa one of your favorite parts of living around Philly?  What’s your order?  Do you have a favorite Wawa iced tea?

Philadunkia:  Wrapping things up, with the season winding down and you playing so well, are you playing for another contract renewal?  Do you want to be back in Philly next year?

Wilkins:  If they’ll have me, absolutely.  I’m not really focusing that far down the road yet, I’m just trying to prove to these fans and this organization that I’m never going to concede and I’m always going to play hard.  But, you’re always playing for a new deal in this league man, you’re never just playing for nothing.