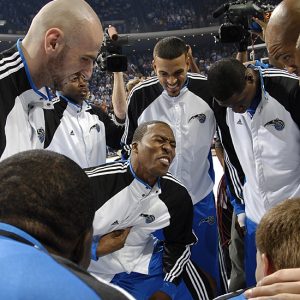 The best news about last night’s season opener in Orlando is that thanks to the Phillies and Game 1 of the World Series, few people actually witnessed the debacle put on by the 76ers.

We easily could have reposted our recap from Game 6 vs. Orlando in the 2009 Playoffs under a new title and our thoughts from that disaster would also apply to last night’s effort by the Sixers.  That fact is amazing to us considering the 2009-10 Sixers obviously have a new head coach, a new offensive system, two new starters, a new sixth man and new uniforms.  Yet they looked almost identical to the team Orlando dismissed from the playoffs last April.  Put bluntly, last night’s opener was difficult to watch at times.

Now we realize that this was just the first game of the year and that Orlando is a very, very good team (possibly Top 5 in the League) so we’ll try not to slam the Sixers too hard.  In fact the best thing for everyone involved in Philadelphia could be to forget this game ever happened, move on and focus on Friday’s home opener.

With those thoughts in mind, we’ll just provide you with a few quick notes on the season opener and put this one behind us. 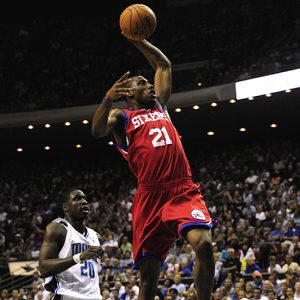 Perimeter defense :  The Sixers still have no clue how to defend the perimeter.  The Magic shot 10-16 from 3 in the first half and 16-29 for the game.  Ryan Anderson (4-7 from 3) frequently had time to sign autographs before launching his 3-ball attempts.  Even more disturbing was the number of times no Sixer even made a late, token effort to rush at the open shooter.  Their defensive rotations were especially poor.  Ohh yeah, did we mention that Magic sharpshooter Rashard Lewis did not play?

AI9 :  Andre Iguodala had a very rough start to the season.  Forget about his 3-11 shooting.  Iguodala looked as if he had left his offensive game in Philly.  Iggy did not score his first bucket until there was 1 minute and change left in the opening half.  As the so-called “best player” on the Sixers and a borderline All-Star, AI9 can not go scoreless in the first half of any game if the Sixers are going to be successful this season. What other “star of a team” in this League allows this to happen?  None.  Lastly, Iggy’s drives to the cup, which are usually a thing of beauty where very helter-skelter last night and he frequently ended up with off-balanced 6-footers instead of dunks or lay ins.

Louis Williams:  Yes he scored 18 points on 6-9 shooting from the field, but the Magic’s Jameer Nelson and especially “J-Dub” made Louis look slow and clueless defensively.  That’s not a good sign considering Williams (15 points & 5 dimes) is O’town’s backup point man and last night was his first game back after he sat out all of last year in a self-imposed retirement.  If Louis can’t stick with Williams what is he going to be like against guys like CP3, Deron Williams and Rondo? 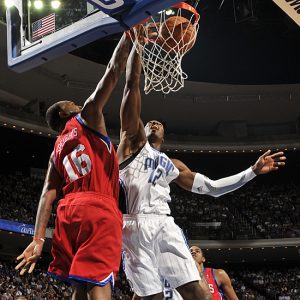 Marreese Speights :  As Thad said in his interview that was posted yesterday, Speights is “a baller”.  He had 26 points on 10-11 from the field and he was everywhere.  But our favorite part of Speights’ night will not show up on the stat sheet.  After a follow slam over Dwight Howard (pic at left), Speights was talkin’ up a storm and Howard eventually got in Speights’ grill and did some yapping of his own.  We’re sure Howard gave our man the “You’re kidding me, right young buck?”  treatment, but to his credit, Speights did not back down.  He really showed some toughness and attitude by staying toe-to-toe with Howard until the refs separated the two.  The Sixers could use more of that attitude because there are too many nice guys on this team.

1st Quarter :  For one quarter of the game, the Sixers actually looked like the could hang with one of the elite teams in the NBA. They played together on offense with solid ball movement and on the defensive end they actually competed.  But they could not replicate that performance in the 2nd Q and that’s when the Magic blew this game wide open.

Bigs :  With Brand, Speights, Jason Smith and yes even Sammy Dalembert, the Sixers have a group of talented forwards / centers that will give them the flexibility to tinker with  many different lineups this season.  At points last night all of these guys showed flashes of serious offensive game.  Down the road this group could provide nice match up problems for opposing teams.

NBA.com has the lowlights from the Sixers at Magic opener.