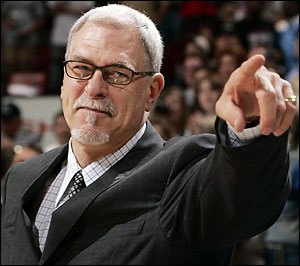 Luring LeBron James back to Cleveland will no longer include Phil Jackson as the Cavaliers announced yesterday that they’ll be rehiring coach Mike Brown who previously found great coaching success with the Cavs.

The move seems sudden for the Cavs, as just three days ago they had apparently been courting Jackson over the open job position with the team.

This leaves Jackson at the way side again, much like he was back in November when the Lakers fired Mike Brown after the teams 1-4 start to the season.  Rumors swirled at the thought of Jackson being rehired for the Lakers’ job much like his name was before Brown got the job with the Cavs, but the Lakers impatiently grabbed Mike D’Antoni instead.

If the Zen Master indeed wants to take to the sidelines one more time, which it’s been said he’s “itching” to do, then why not look at a proud organization like the Philadelphia Sixers?

I’d even take him as a GM. According to cbssports.com today, several teams have reached out to Jackson for a front office role. They said that Jackson expressed in an interview with the San Francisco chronicle that most teams have talked to him about this role over coaching.

“I’ve had some talks with people,” Jackson said, “and there are some interesting situations that are presenting themselves, but I really haven’t made up my mind yet what I’m going to do.  None of it involves coaching. … There are three or four teams that have been interested.”

Jackson said he would be interested in a developing team “where you’d have the influence in (selecting the) coaching staff and the kind of culture that goes along with it.  It goes all the way down to — not down to, but includes — trainers and the people who are doing the hands-on work with players, that have to be really embedded with how you put a team together. … The support group is important; guys who get an opportunity to hear and talk and influence the players. “It would be a real opportunity to implant the game, a culture that I believe in — that’s the intriguing part.”

So what are the chances that the red, white and blue are a team on Jackson’s radar? Were one of the phone calls Jackson speaks of from Josh Harris’ Iphone 5?

In terms of coaching vacancies there’s a few for Jackson to choose from.  The Sacramento (for the time being) Kings, Pheonix Suns, Charlotte Bobcats, Detroit Pistons and of course your 7-6 are all vacant at the moment. P.J. Carlesimo of the Brooklyn Nets is also a guy being rumored to be replaced at the end of the season.

If I’m Jackson, the Nets are top on my list for a few reasons.  They’re actually a good team, they have a brand new stadium, they’re located in biggest sports market in America, the Nets owner, Mikhail Prokhorov, is the 58th richest man in the world with an estimated $13.2 billion, and they have an exciting and growing fanbase.

It’s hard for any team to compete with that opportunity.  It’s like a football recruit visiting LSU one day, to visiting Bowling Green the next – There’s no comparison.

Yet, between the Kings, Suns, Bobcats, Pistons and Sixers you’d have to think that the Sixers should be number one.

The Sixers have a great history and strong culture.  In the 70s and 80s the teams were thought of as contenders every year.  Much like the Celtics did in 2008, with the right coach and right front office moves the Sixers could rise from bottom dwellers to contenders again. Jackson would have players to work with already.  Jrue Holiday, Evan Turner and Thaddeus Young could all benefit greatly from a coach of Jackson’s caliber.

On top of that, the Sixers have a lot of financial flexibility this offseason and the next.  Jackson could help with the Andrew Bynum situation (a player he coached into what he’s become) and also give wise suggestions on who the team should get if they decide to go another route.  There’s a reason why he’s called the Zen Master.

The Kings probably have the most to offer outside of the Sixers.  They have a solid young core in DeMarcus Cousins, Tyreke Evans and Jason Thompson; There’s a strong possibility they relocate to Seattle which would be very exciting for the organization; Jackson could stay on the West coast; The Maloofs also have a lot of money to throw around and by 2014-15 they’ll have a lot of it to throw around in free agency.

The Suns, Bobcats and Pistons all have pretty good young talent, but it’s going to take a while for any of them to be contenders again.  The Pistons have one of the best front court duo’s in the league with Greg Monroe and Andre Drummond and a lot of financial flexibility, but then again…They play in Detroit.

Philadelphia is an attractive city for Jackson.  It doesn’t have as much to offer as New York, but compared to Sacramento/Seattle, Pheonix, Charlotte and Detroit it wins by a landslide.  The history and architecture, restaurant scene, school systems in the suburbs and close proximity to the Jersey shores are all great things.  Plus, Philadelphia fans are as passionate as they come when it comes to sports.

I think a player like Evan Turner could turn his career around with someone like Phil Jackson’s guidance.  After all, the man coached Michael Jordan, Scottie Pippen and Kobe Bryant in their primes. He knows how to get the most out of his players.

Right now, the Golden State Warriors assistant coach Mike Malone is high on the Sixers’ list to replace Collins as head coach.  Indiana Pacers associate head coach Brian Shaw is also rumored to be among the early favorites.  How much of a longshot would it be to lure in Jackson?

What does Philadunkia nation think about it?