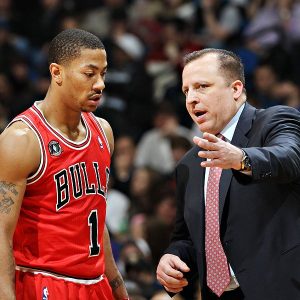 The Sixers have been abandoned again.  It was another three seasons of wasted basketball instead of moving closer to the ultimate goal of a championship.  There were risks taken, hearts broken and blood vessels busted.

Without tooting my own horn too much, I’ll just let you see for yourself…
http://philadunkia.com/?p=263

Yes.  Tom Thibodeau.  One of the candidate’s in the Sixers’ coaching search three summers ago.  Before the hiring of Doug Collins and the drafting of Evan Turner, I had lobbied for the Sixers front office to go after Thibs.  Along with Carey Smith, we felt like he was the true man for the job.

As noted in my story:

“The Celtics were third in the NBA in points allowed per game in 2008-09, while in 2007-08 they ranked second with Thibodeau as an assistant. During Thibodeau’s tenure coaching for the Knicks, New York set a then-NBA record by holding 33 consecutive opponents under 100 points in the 2000-01 season. Later, when Thibodeau packed his bags for Houston, in just his first season coaching he helped the Rockets set franchise records in scoring defense and opponent field goal percentage. In 14 NBA seasons, Thibodeau has helped his teams finish in the NBA’s top 10 in team defense 11 times.”

As we all know, General Manager Ed Stefanski moved on from Thibodeau. He hired the familiar face to the fans and the organization in Doug Collins. He went after someone who was well known and respected throughout the league instead of someone who would make the biggest impact. Thibodeau went to Chicago instead.

Doug Collins meanwhile found success with the Sixers. At the time, it was hard to argue against Collins’ signing. He turned a 27-55 Sixers team in 2009-10 into a 41-41 team in his first year, good for the eighth seed in the Eastern Conference. Collins went on to win runner-up for coach of the year that season and was very popular with fans and the media.

It’s what happened the next two years which point out one man’s continued success story and another man’s colossal failure.

I’ll let the stats do the talking…

These numbers show a few things. From a record standpoint, Thibodeau clearly outshines Collins — 95-53 compared to 69-79. Defensively and offensively both coaches are about the same. Thibodeau is yards ahead of Collins in his rebounding philosophy and getting his teams to the free throw line. Collins is slightly ahead of Thibs in protecting the rock and moving the ball around.

What do these numbers mean? How is it that Collins’ teams can be so similar to Thibs in both offensive and defensive numbers and yet have such drastically different team records the past two seasons?

It comes down to one thing…adjustments. The Bulls can slow down a lot of teams and play possession basketball because of their size in the paint. Joakim Noah, Taj Gibson and Carlos Boozer are juggernauts at rebounding the basketball and are physical enough to draw whistles. The Bulls’ 21.2 FTA’s per game compared to the Sixers’ 16.8 this past season is evidence of that.

The Sixers don’t have the same luxury. The only way the Sixers can beat other teams is through the fast break and quick ball movement. That’s what small teams do. The fact that the 76ers led the NBA in A/TO ratio the past two seasons while playing 10 games under .500 basketball explains this clearly. What the Sixers had over a lot of teams was speed and it wasn’t used to their advantage. Collins’ possession style led to few turnovers, but a ton of contested jump shots rather than free throws on the offensive end.

Everyone knew the Sixers lacked in rebounders and were full of speedy guards/wings over the past two seasons.  Yet, Jrue Holiday, Lou Williams, Andre Iguodala, Nick Young, Evan Turner, Dorell Wright and even Thaddeus Young ran three-man weaves and screen-and-rolls on offense instead of starting the fast break off a forced turnover or defensive board. It was mind boggling (not to mention Doug’s rotations).

That fact that Collins decided to start Damien Wilkins towards the end of the season and Jodie Meeks for the majority of last season proves this theory. He wanted the Sixers to play old school, possession basketball which didn’t maximize either teams potential.

Without Derrick Rose, Thibs knew how crucial it was to go to his big men more often this season and it paid off. Luol Deng became the primary scorer in his absence. Boozer, Noah and Gibson all increased their scoring averages from a season ago while Nate Robinson and Jimmy Butler filled their roles within Thibodeau’s system. The production drop off from Rose’s injury was minimal.

Despite the fact that Collins knew the severity of Andrew Bynum’s knee injury before the season, he made no adjustments to replace the production which would’ve come from Bynum. Admittedly it’s a hard thing to replace the rebounding prowess of a force like Bynum, but offensively Collins did diddly. He used a nearly identical model to 2011-12.

There’s a difference between being a good motivator and a good coach. Collins is a good motivator. He knows how to get his players to compete and play hard (except for a few disheartening losses this season). It’s how to use his talent that he doesn’t understand or how to counter his opponents attack. He’ll blame his players before he blames himself (much like Donovan McNabb did during his tenure with the Eagles).

Thibodeau however (besides the thrashing which was put on by the Heat last night) knows exactly how to identify what his opponents attack and counter it. He’s also one of the greatest motivators in the NBA who knows how to maximize his talent, as well as how to correctly use rotations.

In Collins’ interview for the Sixers he should’ve been given a simple test. They should’ve looked over his previous three coaching stops and asked, “why did Phil Jackson win six championships with Michael Jordan in nine seasons and you couldn’t win one with him in five seasons?” If Collins made the excuse that Jordan was too young or too old or that the teams weren’t developed enough yet, he should’ve been thrown out of the interview.

He coached the greatest player in the NBA for five seasons and the furthest he made it was to the Eastern Conference Finals. As a coach you have to take the blame for everything, but Collins made too many excuses. The ultimate quote by Collins is one he made after a blowout loss at home to the Magic where he said, “The team that we tried to put together we’ve never seen.” As a coach the team on the floor is your team. Not once would you ever hear Thibodeau say they lost because Derrick Rose wasn’t on the floor (even if he thinks it). It’s just not something a professional should do.

Yet in the end, Collins was hired and Thibodeau was not. One man coached his depleted team to the Eastern Conference Semis while the other man coached himself out of a job. In hindsight the Sixers should’ve gone after Mike Woodson before the Knicks scooped him up as an assistant in 2011-12. Should the Sixers really have handed Collins a four-year deal from the beginning? Collins was a good coach for one year and held the team back the next two. Three years wasted that we’ll never have back. It’s hard to imagine what three years could’ve brought with Thibodeau or Woodson, but in terms of your personal health it’s probably better not to imagine that and just hope that one day you’ll forget all about it.

Bulls and Sixers draft/transaction history for the past three seasons:

Sixers trades: Andre Iguodala to Denver/Moe Harkless, Nikola Vucevic and a lottery protected first round pick to Orlando for Andrew Bynum and Jason Richardson, Mareese Speights to Memphis for 2012 and 2013 second round picks, Ricky Sanchez to Memphis for Sam Young 2012, None 2011; Willie Green and Jason Smith to New Orleans for Darius Songaila and Craig Brackins, Samuel Dalembert for Spencer Hawes and Andres Nocioni 2010.