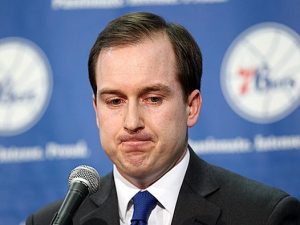 “Hope is a dangerous thing.  Hope can drive a man insane”

That quote from Shawshank Redemption holds true for 76er fans, now more than ever.  Hope is all that is left, I guess.

Seriously, sit back and think about the Philadelphia 76ers for a moment.  Not much, right?  Maybe Sam Hinkie pulls a rabbit out of his hat, a bunch of other things go right and certain guys elevate their game in 2013-14.  Still, how much will that help?

$12,000,000 in cap space is just enough to do something stupid, but not enough to pull off a miracle.  Between Turner, J-Rich and Kwame; the 76ers have more than 25% of their roster as dead weight.  Even getting players at their true value won’t be enough to do anything but keep the team in an awkward spot.

Our man Bynum looks ready to screw the franchise for the next 5 years by being Shawshank quote incarnate.  If not Bynum, it will be some other player.  Let’s just hope that Hinkie’s advanced analytics inform him that he should avoid the players I am write about after the jump.

(WARNING: LOOK AWAY NOW if you really like OJ Mayo…)

On a per 36 minute level, Mayo is Nick Young with an extra 2.5 assists,1.3 turnovers along with bad defense.  How will everyone feel if Mayo signs a deal for $5,600,000 or more for multiple years? Exactly…..

Smith has regressed as a player, which has more to due with his mental/emotional state than anything else.  His offensive and defensive efficiency crept to career lows in a contract season.  The easy explanation is that he is tired of Atlanta and knows he is getting a 4yr $50 million dollar deal from someone, so why exert maximum effort this year for a team that is looking towards the future.  A bigger concern is can our next head coach reign in the 3pt Shooting Josh Smith?  Over the last 3 years, Smith is 116th in total 3pt attempts and 115th in 3pt %. There is no doubt that his game has been negatively effected by being allowed to freelance on both sides of that ball.

A 3pt shooting Josh Smith who isn’t the great defender in years past isn’t something worthwhile for a team like the 76ers.

Not even good at his specialty: Corey Brewer

Talk about a guy who is just sneaky terrible.  He literally does nothing well except getting steals, and interestingly enough, getting steals isn’t an indication of anything.  For a guy who is supposed to at least be good on defense, Brewer has been ~neutral for 3 of the past 4 years.  Much like SwaggyP this year, Brewer is basically in his prime so at least the 76ers would be getting him at the apex of his basketball career.  His last deal was 3yrs-$7.5 million total and that’s something I could (barely, assuming Ronnie Brewer isn’t already signed) live with.  Anything above that would just be embarrassing to have him locked in at.

Imagine a 29 mpg guy 12pt (59 TS%) 10 reb in  who put up a robust 19.7 PER and .142 WS48 at the age of 24.  Now imagine him on a team with an absolutely D-League level roster outside of the starting 5.  If you’re still with me and I know you are, can you imagine that the Blazers were better with Hickson on the bench?  All that isn’t an issue with how I view Hickson as a player and potentially signing him.  It’s the money.  Hickson will be paid at minimum $8 million dollar a year range in year 1 of his new deal and around $11 million in year 4.  He will end up being decent enough value but his improvement curve (as with all bigs) will help to keep the 76ers right in the land of mediocre through his time here.  The 76ers might even win a playoff series in his 4th year and along with him having a career year at age 28, the 76ers will then give him a massive-ish deal that will firmly entrench the team in series of 1st rd 4vs5 match-ups until 2020.

There are a ton of guys the 76ers shouldn’t sign, but these are 4 that I feel especially strong about.  Let’s hear from everyone and find out who the team absolutely shouldn’t sign and try to be more original than “Steve Troll at GM” and Andre Iguodala.  While our voices may not be heard as loud as we’d like on issues like this, it’s still a fun exercise.  The fun will mostly be when the team ends up signing multiple guys suggested by me or readers in the comment section and we can all give a collective “WTF”.