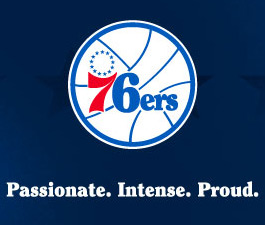 Unfortunately, Sam Hinkie is in a position to fail.  There is no other way to look at it.  He is a smart guy, but he isn’t that smart.  The Eastern Conference was underwhelming this year, but in the NBA things go in cycles.  Over the next 4 years, there is no realistic way for the 76ers franchise to taste the kind of success that the fans of the organization are clamoring for.

The 76ers cupboard is bare, similar to the Eagles, Phillies and Flyers.  The only thing more disappointing than what is going to happen the next few years is the shock and confusion over what is plain to see for the trained basketball eye.

After the jump, I’ll go ahead and rank how the franchises in the Eastern Conference will perform over the next 4 years.  The criteria involves a wide range of elements — Championship Equity, Room to Improve, Salary Cap Factors and Fan Expectations, etc.

#1) Miami:  The favorites to win an NBA title this year and in 2014-15.  Lebron, Bosh and Wade all have player options that off-season which they are likely to decline in order to take lower salaries and keep their talents in South Beach.  The Heat winning 4,5,6 championships in a row is a very distinct possibility.  “Birdman” has turned into the best free agent acquisition this past year, who could have predicted that?

#2) Indiana:  The Pacers are in a great position moving forward.  David West will likely be resigned to a similar deal (2yr-$20 mil).  Similar to the 76ers and Bulls, they had an impact player essentially miss the entire season in Danny Granger.  Granger will return in 13-14 as the 5th best starter and he was arguably the best Pacer in 2011-2012.  The Pacers are a team on the rise, an elite starting 5 and a young bench to go with a coach who has done a phenomenal job this past year.  Everything is point up for the Pacers, and the question now seems to be “When?”, not “If?” with this team.

(Editor’s note:  An error in the original post missed the fact that James Posey was amnestied in December 2011, so an amnesty of Danny Granger is not possible.)

#3) Washington:  John Wall did something quite unheard of last year and he did it coming off a leg injury — JW took a large jump in possessions used, had an equally big decline in turnover % and increased his scoring efficiency.  Sneaking into the top 3 of this year’s Lottery means a very real shot at Otto Porter or Ben McLemore, who can be eased along playing behind Martell Webster and Trever Ariza or join Wall-Beal in a 3 man back-court.  The Wizards are going to win a lot of games next season and beyond.   Anything less than 45 wins next years with increases every year would be a disappointment for that franchise.  Of course, if they trade Nene+Okafor for the expiring contracts of Biedrins+Jefferson of GSW, they’d be in an arguably better situation moving forward and right at the top of the Wiggins sweepstakes.

#4) Detroit:  Greg Monroe will be close to 20/10 next year and he’s only the 2nd most valuable asset on the team.  Andre Drummond is one of the most untouchable assets in the NBA, but his free throw shooting needs to be at 50% For him to turn into an All-NBA player.  With a possible $35,000,000 available in cap space, Detroit can really make waves.   Joe Dumars needs to do better than Ben Gordon and Charlie V. going forward the next couple off-seasons and Drummond needs to become who I think he will be or listing DET at #4 will seem very foolish.

#5) Cleveland:  First and foremost, Kyrie Irving needs to shake the injury bug, and that is not certainty.  Winning the lottery sure helped with the Andrew Wiggins sweepstakes, if they pick Nerlens Noel.  A bunch of draft picks and insane flexibility gives the Cavaliers room to operate.  Thompson, Waiters, Zeller all show some level of promise and are very cheap.  Trading Varejao is a necessity at this point, as he is a negative for them. Swapping him for someone completely awful like Evan Turner would be a massive win in the Wiggins Sweepstakes.  With the possible return of the King to his hometown, Cleveland is a franchise on the rise.

#6) Atlanta:  Horford, Lou Williams, John Jenkins and 2 1st rd picks are the only things on the Hawks’ books this summer.  $38 million in cap space (it’s really less because they will be resigning Jeff Teague) is a scary number for a team that already has one All-Star front court player, as I see them as a dark horse for Andrew Bynum and bringing back Josh Smith isn’t the worst deal ever, if they sign the right coach.  Danny Ferry also has cap room to operate with, which is paramount under the new CBA.  Atlanta will be a very sturdy roster next year, whether it’s short term or long term deals remains to be seen.

#7) Milwaukee:  Sanders and Ilyasova is a very good young duo.  John Henson also showed some ridiculous flashes in 2012-13.  If Ellis is dumb enough to opt out (staying isn’t the worst thing either) and the front office is smart enough to not overpay Brandon Jennings (4yrs @ $32mil), this is another team that can do a lot this off-season.  Using the Amnesty on Drew Gooden, whether this year or next, seems like a foregone conclusion.  Flexibility is the name of the game under this new CBA and the Bucks sure can have that with intelligent moves for years to come.  Milwaukee isn’t a premier free agent destination but it doesn’t need to be because of the new CBA and the limitations that come with it.

#8) Chicago:  Their Head Coach’s willingness to play starters 40 minutes a game has residual effects.  They’ll likely be a #3 seed next season and will only slide from there in coming years. Will Chicago’s owner reach into his own pocket knowing the Bulls have a ceiling that isn’t winning a championship?  Call me crazy but Chicago should ship Derrick Rose to the highest bidder this off-season.

#9) New York, Brooklyn and Boston:  This is a tie.  All these teams are below Chicago because they are less talented and older.  They’ll all be in the playoffs and on vacation well before June the next few years.  There is value in that if you are a fan of those teams.  All 3 of these teams should be blown up, but none will be.  Such is the life of an NBA GM.  Here is a 4 way trade with these teams plus the Lakers that benefits everyone one way or the other;

#12) Orlando:  Two more years in the Lottery and then they’ll be a playoff team for a decade.  Tons of young cheap talent and room to maneuver in the future makes Orlando a true team for the future.  Call me an optimist, but I think that D12 returns to Orlando this summer in a shocking turn of events.

#13) Charlotte:  Three more years in the Lottery, plus a couple picks owed to them from Detroit and Portland and being the front runners in the Andrew Wiggins Sweepstakes has value.  Kemba and MKG are good building blocks at PG-SF, and they’ll have an opportunity to build slowly. They’ll be fighting for a playoff spot in 4 years with a young nucleus that could be viewed as the future of the NBA.

#14) Philadelphia:  The only Andrew the 76ers have a shot at is 7ft tall, smokes cigarettes, doesn’t love basketball, is 25 years old, put up 18/12 when healthy and has everyone in Philadelphia wondering what will happen this off-season.  The new GM can’t let him go but he can’t sign him to a massive deal either.  There is no great answer and there is no reason to think one can be had over the next 4 years.

Making the playoffs is as doubtful as being a bottom 5 team record wise over the forseeable future.  However, if Hinkie grabs a guy who turns into a borderline All-Star with the 11th pick this June, Jrue actually becomes good (he wasn’t at the end of last year), Thad elevates his game with the reintroduction of the 3ball, Bynum is healthy and motivated, Wright is resigned, Hawes plays like a man, Moultrie turns into something, Lavoy gets a motor, ET is traded for a draft pick………. the 76ers will have a chance to get merked by Miami, Indiana or Chicago next year in the 1st round and the next few years will be rinse and repeat.

The team could also do the short term contract thing again this off-season.  Maybe they make the playoffs but the reality is, they’ll have a bottom 10 record with another small chance at grabbing a difference maker.  A few years of doing that and the team is firmly entrenched in the same spot everyone is so adamant doesn’t happen.  A few coaches, another GM and the team truly starts the rebuilding process in 2023.

There is no real scenario that Sam Hinkie can succeed with.  His outside the box thinking is overrated (Asik+Lin deals), anyone can become a CBA expert and the Rockets only drafted on an ~average level during his time there.  He is thought of very highly by NBA people but the average NBA front office guy is half in the bag when it comes to basketball. The circumstances he walked into don’t make it his job easier, but he knows what he signed up for

#15) Toronto:  The smart move is to trade Kyle Lowry and Amir Johnson to Boston for Rondo+Celtics 2013 1st rd pick, win the Andrew Wiggins sweepstakes in 2014 and amnesty Bargnani at the same time.  From there, the Raptors are suddenly a real NBA franchise with a future.  That won’t happen because it makes sense, obviously.  Toronto is apparently making a run at Denver’s GM which would jump the Raptors to #14 in the rankings.

RT @WayneEllington: In 2014, when I was playing for the Lakers, my Pop got killed. Bean was there for me. His texts and advice motivated me…
h J R
philadunkia

RT @NBCSPhilly: Growing up, our @SerenaWinters idolized Kobe Bryant and later in her career, had the opportunity to cover the Lakers' star.…
h J R
philadunkia

RT @JoelEmbiid: Man I don’t even know where to start😭😭 I started playing ball because of KOBE after watching the 2010 finals. I had never w…
h J R
Follow philadunkia