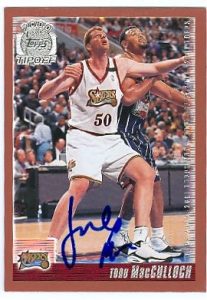 Todd MacCulloch may not be a name synonymous with NBA success, but for a period of time in the early 2000’s he was a big part of some very good teams. His numbers were never eye-popping, but he was a consistent contributor to two Finals-bound teams, and enjoyed four solid seasons before a chronic foot condition forced him into an early retirement.

Most notably, he was a member of the most recent Sixer team to make it as far as the Finals, serving as a backup to Dikembe Mutombo. Recently, Todd sat down with Steven LeBron Radio to discuss his time in the NBA, playing with Allen Iverson, and his career as a pinball player.

After the jump, check out some highlights of what he had to say, and be sure to check out the full podcast at Steven LeBron radio.

On his love of NBA socks: “I miss the super soft NBA socks more than anything. NBA socks are the best things ever I’ve tried to buy them socks through Eastbay and it’s just not the same.”

On if he ever played hockey growing up in Canada: “Absolutely, growing up in Winnipeg, that’s just what everyone is playing. I pretty much only played hockey up until about age 11 or 12. Hockey was everything. But I decided I didn’t want to be a professional at age 11, so I quit hockey before body-checking started. I wanted to try out everything, and not just focus on one game.”

Now, on to some Sixers stuff:

On how Iverson felt after almost being traded: “I don’t think that sat too well with Allen that they maybe wanted to move him, so that maybe lit a fire under him to want to show that he belonged in Philadelphia and that we could be a championship team. I don’t know how it affected him personally, but I’ve been traded before so I know what that feels like.”

On finally overcoming Indiana in the 2001 Playoffs: “I think the [Sixers] had made it to the second round and lost the year before my rookie season. Then my rookie year we lost in the second round to Indiana. I think it was Indiana that beat us the year before too. So, there was a feeling that, this is a good Indiana team, and while it’s great that we’re making the playoffs, we’re tired of getting so far and being outed.”

“So I think guys had a goal right from the start of the season, we have to take care of business, we have to get home court. So that second season we jumped out to a 10-0 start on the season. In playoff series it’s really nice to have that 7th game, should it get there, be at home. You got a much better chance of winning that game at home. After we beat Indiana in that first series, I remember Iverson saying that we finally got that monkey off our back.”

On the energy of the 2001 Toronto series: “There was a lot of excitement in both buildings for that series. It was like twenty years since the last Philadelphia title, and the city was really feeling like this was a chance. What you had was two really good teams having one of their best seasons in recent history, and you had a feeling it was going to come down to the last game.”

“Iverson was really playing out of his mind. Obviously he had a great career, but he would really pick it up during playoff time. It’s pretty remarkable to be able to step up your game when you’re already playing at an extremely high level. The building in Toronto was insane, the building in Philly was insane, and I’m really glad we got to have game 7 back home. There was a lot of electricity, you couldn’t hear anything. That was a very memorable series, I got to see it all, I don’t think I touched the court, so I just got to root on my team and got a pretty good look from the bench.”

“It was a special thing to be in Philly during all that excitement.”

On how he ended up on the Nets: “Personally I had a decent showing in Game 2 of the 2001 Finals against L.A., which didn’t really help us too much to continue that series and lengthen it, but I think it helped gain some interest in some GM’s about where I was going to be the next season, and the Nets gave me the best offer.”

“I didn’t really want to leave Philadelphia, I loved it there, I loved the situation, we had just come off of an amazing season and I wanted to be part of that again. There was this sense that we got all the way to the Finals, and if we get the core together, you know, I wanted to be a part of that. Part of being a restricted free agent is that you can go out and get the best offer you possibly can, and in this case the Sixers had two weeks to match it. So ideally I wanted to go out and get the best offer I could and have the Sixers match it, unfortunately they weren’t able to retain me.”

On playing for back-to-back Finals teams: “I think I started to get spoiled thinking that this is something routine. Now a lot of time has passed and I look back and realize how lucky I am to not only have gone to the Finals once, but twice, and with two different teams, especially when you think about that there’s guys that have had fifteen year careers and never made it to the playoffs, or never made it out of the first round; I feel very lucky.”

On the timing of his retirement: “It was tough. I was really starting to get my confidence, and I felt like my teammates and coaches were starting to get their confidence in me, and to have my career go at that time was extremely difficult, and it still continues to be something I think about probably too much. I felt like I had another good ten years, and I’m sad for all of the experiences and relationships, and just being part of a team, that I missed out on. I didn’t realize how important being part of a team was to me, and I miss it.”

On his transition to pinball: “To me it is a really addictive hobby, and I started it long ago. I grew up in a great time for pinball; I’ve always been around the game and enjoyed it. When I was signed by the Nets we got a nice house and the basement was pretty empty, so I figured it was a good time to get those games that I always liked. I met a friend of mine who introduced me to the world of competitive pinball and it just really clicked for me.  I was missing the camaraderie for basketball and a team event so I joined a couple of pinball leagues.”

RT @TheAthleticPHI: .@DerekBodnerNBA: "The answer for the Sixers should not be to minimize the role of analytics in decision making. The an…
h J R
philadunkia