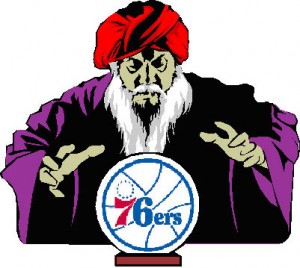 Following upon the coattails of greatness, ESPN has recently put out it’s own future NBA power rankings.

Unlike the one I bestowed upon the readers of Philadunkia last week, this is a 3 year projection by ESPN with a different set of criteria.

They use 5 categories to rate the NBA teams; Players, Management, Money, Draft, and Market.  The 76ers were ranked 24th in the NBA and 11th in the Eastern Conference over the next 3 years.  This list (like all long term projection features) need to be taken with a grain of salt, especially if you have a functioning brain and see the Knicks ranked behind the 76ers.

Today at Philadunkia, I will take a closer look at these ESPN ‘Future Rankings’ and see how things shake out.

My thoughts on ESPN’s ‘Future Rankings’ after the jump.

The 76ers should probably rank even lower on this mark, for now.  The NBA landscape has changed.  Markets do not matter (to a degree).  Where (the team/city, not draft #) a player is drafted does.  More often than not, a player wanting to leave a franchise is the right decision by that player.  The new CBA makes many of the scenarios that have unfolded in years past impossible, unless a guy is willing to take a PAY CUT.  One thing that is apparent, 99% of NBA players value their paycheck above winning.  Markets have become largely irrelevant with this new CBA, the team who puts up the most money is going to get their man.

This ranking should also include current players on rookie contracts, for obvious reasons.  7 of the 8 teams ranked below the 76ers made the playoffs this past season, only Toronto failed to do so.  As I mentioned after the Andrew Bynum trade, the new CBA made it imperative to have young/cheap/retainable talent on an NBA roster.  The two guys who now fit under that bill are Arnett Moultrie and whomever is drafted with the 11th pick this year.  For the following 2 off-seasons (’14,’15), the 76ers keep their pick if it’s in the lottery and don’t if they make the playoffs.

One spot below the 76ers in this ranking is the Atlanta Hawks.  The Hawks GM, Danny Ferry, jettisoned Joe Johnson for a package that included in return, a 2013 1st rd pick along with middling-expiring contracts and just hired the most qualified assistant coach in the NBA to take the reins of his team.  The 76ers once again seem to get the benefit of the doubt here for reasons beyond explanation.  The owners are not basketball guys and can only be seen as negatives since acquiring the franchise.  As ballyhooed as the Hinkie hiring was, he has yet to hire a coach and was widely reported to still be spending time in Houston.

On the otherhand, NBA executive of the year Masai Uriji was at his new jobe in Toronto, firing former 76er legend Ed Stefanski, on day 1.  There is a very real argument that having a new GM and no coach is a better position than most teams are, but since a coach’s “abilities” are directly related to his PLAYERS, this ranking just doesn’t jive.

In a shocking turn of events, the 76ers manage to once again be overrated in this regard.  With the Salary Cap only looking to be around $58.5 million instead of $60 million, the 76ers (if Bynum/Wright are not resigned) will have only $10 million for free agents this off-season.  That spells another year of 1 year signings that will have the team with ~$30 million in cap space for the 2014 off-season.  Every year there are tons of bad teams with lots of cap space, but the 76ers are in a unique spot.  They can’t get into the Luxury Tax because the real way to facilitate that is to resign your restricted free agents (aka 1st rd picks) to deals with a full roster in place or have a young guys worthy of massive deals.  The 76ers don’t have that, they have Evan Turner, Lavoy Allen and the criminally underrated, Spencer Hawes.  Charlotte is in a better cap spot in regards to free agency the next 3 years, has the players to get into the luxury tax and has Michael Jordan as an owner.  MJ might not be the best at talent evaluation but when Charlotte is turning the corner and it comes time to pay players and get into the Luxury tax, Michael Jordan will open that checkbook.  Somehow though, the Bobcats(soon to be Hornets) are #24 on that list.

PLAYERS (0 to 600 points) 193 pts. — 25th : Current players and their potential for the future, factoring in expected departures.

For the fourth time in 5 categories, the 76ers are unfathomably overrated.  MIL, SAC, ORL, CHA and PHX are all listed below the 76ers.  Ummmmmm what?

Milwaukee was better last year, will be better this year and will be better going forward, Orlando will likely be better by mid-season 15-16 and Charlotte may be as well.  SAC has the best player of all these teams in Demarcus Cousins as well as a solid nucleus of Evans+Thompson+Thomas+Thornton, to go with a totally new regime that wants to do things right.

The only team that realistically is worse off is Phoenix and they are just OMG BAD.  Even with Phoenix, none of these teams have anything close to the Bynum situation and all the possibilities that go with it which either has the 76ers totally screwed for the next couple years or topping out as the 2009-2013 Atlanta Hawks.

While not perfect, this ESPN projection does highlight one interesting fact.  Everyone except fans of the 76ers seem to realize the perilous spot this team is in going forward.  Miracles do happen in the NBA and it’s possible Philly is the spot of the next blessing.  That is what it’s going to take at this point.  Fans of teh 7-6 seem to view Bynum as this Deus Ex Machina and were spared the agony of the truth this past season.  As I’ve said before; If Jrue actually becomes good, Thad stretches his game, the #11 pick is a future stud, Bynum is healthy and other guys develop, the 76ers could be onto something….

The more likely scenario is the better teams stay better, the worse teams build a stronger foundation and Sam Hinkie is living in my basement Mid-April a few years from now, pause.