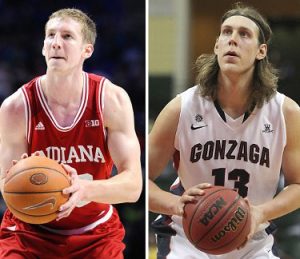 There are an unlimited number of NBA mock draft websites available on the Internet and their predictions for which prospect the 76ers will select on June 27th, 2013 are almost as limitless.

However, among the more reputable sites on the world wide web, there a consistent theme has developed which indicates that the Sixers will draft a big man later this month.

In fact when you read the predictions from the sites that are historically “in the know”, two names get linked with the Sixers time and time again – Kelly Olynyk and Cody Zeller.

Try to contain your excitement.

Neither of these centers projects out as an all-star caliber or franchise type player.  But let’s be honest, finding that level of baller at the #11 pick is rare.  However if developed properly, either one of these offensively skilled kids could be a key piece that helps Hinkie & Co. get this franchise turned around.

After the jump, we’ll take a look at both players through “expert” analysis and video.

Then we want to know, Olynyk or Zeller – “Who ya got?”

Chris Mannix of SI.com says:  With the future of center Andrew Bynum in doubt and with a hole at power forward, the Sixers badly need frontcourt help. There are questions about Olynyk’s strength and concerns about how, after three years at Gonzaga, he will match up with bigger, more physical defenders. But there is no denying Olynyk’s offensive skills. He has a variety of moves in the post and showcased guard-like perimeter shooting at the combine.

nbadraft.net says:  Very comfortable operating on the block, using textbook positioning … Shows an excellent understanding of the game and has become one of the most dominant bigs on the college level … Has the ability to score on the block with up and unders, pump fakes, drop steps as well as knock down mid range and even outside shots … Solid in the open floor but more effective in the half court … Has decent agility, just lacks much explosiveness. He’s not a stand out athlete, but he does have considerable touch and coordination for a 7-footer … Can play out on the perimeter effectively, showing the ability to pass the ball and even handle the ball to get to the basket … Does a good job of using his body to shield defenders from the ball when going to the basket … Solid strength and rebounding ability … Unusually polished post skills for a college player…Finishes very well around the basket, even after contact … Quick, reliable hands and good reflexes allow him to catch passes and go up for shots quickly … Excellent shooter…Not the most athletic guy. Below the rim type of “finesse” player … Foot speed and overall athleticism are below average for the NBA … While he gives solid energy and effort, his lack of foot speed and athleticism decreases his defensive abilities…Not a shot blocker, lacks the leaping ability to be an intimidating defensive force … Runs into trouble against elite level bigman athletes that don’t fall for his fakes as he is unable to bull his way to the basket and can struggle to get his shot off. Gets his shots blocked a fair amount, and that will likely increase against bigger and better athletes at the next level

Draftexpress says:  When he isn’t operating one on one in the post, Olynyk earns himself some easy opportunities by virtue of his size and activity level off the ball. He moves well within Gonzaga’s offense, cutting aggressively to the basket, plays exceptionally well off the penetration of his teammates, and provides a big target in the paint.  Away from the basket, Olynyk is still a reliable set shooter…Olynyk does not leak out to the perimeter often, but is still a threat to hit from the outside. His shooting ability has been a big plus for him at the free throw line…When defenders give Olynyk driving lanes when he operates away from the rim, he shows unique ball handling ability for a big man. Always appearing in control when he puts in the ball on the floor, Olynyk lacks the quickness to blow by defenders in isolation situations, but he can use his dribble to set up his defender for a move in the mid-post, or dribble into a jump shot…A versatile offensive talent, Olynyk is not without his faults. He ranks in the top 10 in turnoversamongst prospects in our top-100 per-40 minutes pace adjusted, being a bit too aggressive putting the ball on the floor when operating in the post…With that said, scouts will have significantly more pressing questions about his rebounding ability and defensive presence. Lacking the explosiveness to rebound outside of his area or provide a presence blocking shots from the weakside, Olynyk does not make a sizeable contribution in either area..Olynyk shows somewhat inconsistent intensity on the defensive end, though he does operate in a decent stance and moves his feet well for his size. His lack of lateral quickness and often poor awareness limit his impact on this end of the floor. He’ll need to improve his intensity and show better focus to help make up for his shortcomings as best he can on this end of the floor.

Chris Mannix of SI.com says:  Zeller picked up some momentum from the combine, and it’s unlikely he will slip out of the top 10. Teams still want to see how advanced his perimeter game is in workouts, but his tremendous athleticism and productivity in college are impressive. The Blazers are set at power forward, but with the dwindling number of power centers in the NBA, a Zeller-LaMarcus Aldridge frontcourt would have enormous offensive potential.

nbadraft.net says:  Bigman with an excellent basketball IQ and all around athlete …Runs the floor extremely well for a 7 footer.  He’s also has great body control for a center, showing unusual ability to convert plays on the break … Plays with great energy, a focused and intense competitor … Highly unselfish, team guy and a willing passer with good vision for a big … Puts winning and his team over individual accolades … Fundamentally sound…Great feel for the game…Never seems to be in a rush and very deliberate with his moves … Shows solid ability to face up and knock down mid-range jumpshots … Displays good hands, rarely fumbles the ball … Good rebounder, good technique, anticipation, getting low and boxing out …A solid defender.  Uses his size well to blanket opponents…Stays between his man and the basket and doesn’t gamble or bite on fakes easily …Hard working kid, who should only improve over time and become a very solid NBA player …Shows a willingness to battle in the post, and gets to the line at a good rate where he converts 75%, (averaging 5 of 7 per game) …Has the size and versatility to play either the 4 or 5 positions …Not a shot blocker or much of a presence on the defensive end…Can be overwhelmed by stronger and more explosive opponents … While very composed, his moves can be too predictable, leading to blocked shots … Unselfish to a fault. May never be a huge scorer in the league … Seems to be more comfortable in a secondary role. Lacks an alpha male personality.

Draftexpress says: The intrigue around Zeller continues to revolve around his excellent combination of size, athleticism and scoring instincts. A fluid, coordinated 7-footer, Zeller runs the floor as well as any big man in college basketball and can make plays above the rim with ease if given a running start. Zeller sports a near-complete offensive game, as he’s capable of scoring in virtually every way possible from almost anywhere on the floor and gets to the free throw line nearly ten times per-40, an unbelievable rate. He’s a very dangerous weapon in particular in the low-post, capable of slithering his way around defenders with quick spin-moves and excellent body control, and turning to either shoulder with very soft touch. A very good ball-handler for his size, he’s also adept at beating defenders off the dribble with an excellent first step going left or right, and then finishing with either hand in a variety of creative ways, sometimes using the glass…Despite the high skill-level and tremendous versatility Zeller displays, his offensive game is not a cinch to translate seamlessly to the NBA, unless he makes some stark improvement in certain areas…he still gets pushed around quite a bit inside by more physical opponents…Opposing teams seemingly recognized that he doesn’t love contact and tried to rough him up quite a bit as the year moved on, which he didn’t really respond to in the best way, especially in Indiana’s biggest games.  His short wingspan and seemingly small hands appeared to be a major factor when looking at his ability to finish over length at the collegiate level, as he has a low release point on many of his shots around the rim, and gets his shot blocked a lot more than you’d hope. With his frail frame, average explosiveness off two feet, and short arms, there are plenty of concerns about whether he’ll be able to finish consistently in traffic at the NBA level.

So, Olynyk or Zeller…Who ya got?