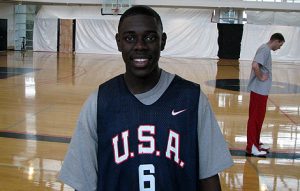 One of the best ways to improve yourself in any sport is to play on your country’s national team. A recent example is former Sixer Andre Iguodala. Iguodala joined Team USA for the FIBA World Championship’s in 2010. He went on to have his only all-star season in 2011-12, after practicing with players like Kevin Durant, Derrick Rose, Russell Westbrook, Danny Granger, Rudy Gay and Eric Gordon for a whole summer.

Team USA brought him back for the Summer Olympics last summer where once again he played exceptionally well and helped his team bring home the gold medal.

That’s why Sixers fans should be excited at the announcement that Jrue Holiday was selected today as one of 27 players to attend the 2013 USA Basketball Men’s National Team mini-camp, held July 22-25 at UNLV’s Mendenhall Center in Las Vegas, Nev.

USA Basketball Chairman Jerry Colangelo explained why this group of players were selected.

“The group of players we have assembled for the mini-camp are extremely talented and very versatile,” said Colangelo.  “This is an important opportunity for each one of them because we will be evaluating which players will continue to be involved in future USA National Team training camps and teams.”

Colangelo talked specifically about Jrue’s placement on the Select Team last summer saying, “In naming Jrue to our Select Team we’ve added an athletic guard who can get to the rim and someone who is also a good 3-point shooter. Both those skills will be invaluable in helping prepare our National Team for this summer.”

Jrue also competed for the USA Basketball Junior National Select Team as a high school senior in the annual Nike Hoop Summit in 2008.

Last season, Holiday averaged career-highs of 17.7 points, 8.0 assists and 4.2 rebounds and was named to his first All-Star Game, becoming the youngest player in franchise history to achieve that honor.  He was the only player in the league to average at least 17.0 points and 8.0 assists in 2012-13 and just the second player in franchise history to hit those averages in a single season (Wilt Chamberlain in 1967-68).

Going toe-to-toe in practice with players like Bradley Beal, Mike Conley, DeMar DeRozan, Paul George, Kyrie Irving, Ty Lawson, Kawhi Leonard, Damian Lillard, Dion Waiters and John Wall should help Jrue in taking his next step as a player. The Sixers last season lived and died on Jrue’s production, so they’re going to need all he has to offer in the 2013-14 campaign.