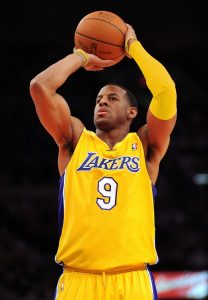 According to multiple reports, former Sixer Andre Iguodala will opt out of his contract with the Denver Nuggets next season to become a free agent.

Iguodala, whose lone all-star season came with the Sixers in 2012, is set to make $16.2 million next season. By opting out, he’ll have the ability to sign a five-year contract with the Nuggets or a four-year deal with another team.

The news is somewhat surprising, considering the Nuggets held a 57-25 record last season. Yet as a No.3 seed in the Western Conference, the Nuggets were upset in the first round of the playoffs by the Golden State Warriors. Their head coach George Karl was fired and their GM Masai Ujiri also left for a job with the Toronto Raptors.

What’s more surprising is the move by Iguodala to decide to take less money in order to have a better shot at an NBA title.

Iguodala averaged 13 points, 5.4 assists and 5.3 assists last season, his first with the Nuggets after arriving in a four-team blockbuster trade from the Philadelphia 76ers that also involved Dwight Howard and Andrew Bynum.

The question now is what destinations Iguodala could possibly pursue?  The obvious choice would be for Iguodala to sign with the Cavs who’re in need of an athletic point-forward like Iguodala, but their sights seem to be set on bringing LeBron James back in town.

Another team that could fit for Iggy is the Detroit Pistons who just hired Maurice Cheeks to be their head coach. Cheeks used to coach Iguodala on the Sixers. They could also use a forward of Iguodala’s caliber and they have over $20 million to spend in free-agency this summer. Iguodala teaming up with Greg Monroe and Andre Drummond would wreak havoc defensively on opposing offenses.

Lastly, maybe Kobe Bryant got Iggy on the horn? There’s a lot of talk that Dwight Howard will likely be out of L.A. by summer’s end and Iguodala and Bryant seem to have a good relationship. They’re constantly going back and forth on Twitter and were members of Team USA together last summer. It seems as if Iggy misses the spotlight as well and he’d instantly have that again as a member of the Lakers.

Wherever he decides to go, he will be a valuable asset to any team and as of now it seems like he’ll come at an affordable price tag.

RT @Rashaan: I’ve watched the replay of a perfect play call with Tobias and Embiid to take the lead 10 times. How does Embiid miss that bun…
h J R
philadunkia

Somebody, anybody should probably box out collins
h J R
philadunkia