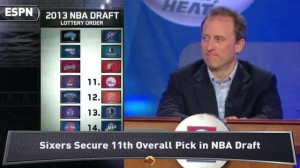 It’s time for another edition of Philadunkia 4on4…

As a reminder, this Philadunkia question and answer series is “loosely based” on ESPN.com’s highly successful, NBA related series of posts titled “5on5″.  Our version of this genre of posts will ask 4 Philadunkia scribes to answer 4 topical, hot button questions about our Philadelphia 76ers.

Well as any great hoops coach will tell you — playing 4on4 is the best way to truly learn the game of basketball.

After the jump four key questions that are currently facing our 76ers and some answers from four Philadunkia scribes.  Included in this week’s edition are questions surrounding the upcoming NBA Draft, the Sixers coaching search and what the Sixers should do in free-agency.

1. On a scale of 1-10, how frustrated have you been by the Sixers coaching search?

Jeff McMenamin:  8. It’s incredible that the Sixers have been without a coach since April 18 and yet little to no progress has been made in the candidate search. Other quality coaches are being swept away daily, while the pickings keep getting worse and worse for the 7-6. I don’t agree with going into the draft and potentially Summer League without a coach. The point of a draft is to find players that will fit a coaches gameplan on top of team needs. All signs point to Michael Curry taking over the reigns in the 2013-14 campaign.

Steve Toll:  0. It seems to me that Michael Curry is going to be the head coach next season.  Players win championships, not coaches and this team isn’t close to winning anything.  Sam Hinkie and Josh Harris had a plan in place at the time of his hiring.  I think this was part of the plan.

Michael Kaskey-Blomain:  8. I didn’t want them to rush into the search, but seeing all these candidates get snatched up by other teams is kind of disheartening. It seems counterproductive to get a coach after the draft when other roster moves could potentially be made.

Jake Fischer:  0. I’m not frustrated at all. Sam Hinkie has made it clear that the Sixers are going to find the team’s players before the coach and I like that approach. Yes, coaching is extremely important, despite what naive fans say. Look at this current NBA Finals: it’s a chess match. But, at the end of the day, a coach can only do so much and you need the players on the court to win ball games and perform. If the Sixers don’t hire a coach until Summer League, I wouldn’t be surprised nor upset.

2. DraftExpress.com has the Sixers taking Cody Zeller at #11, good or bad?

Jeff McMenamin:  Bad. I’ve watched Zeller play. The last thing the Sixers need is another soft big man filling the paint who thinks he has range. My current NBA player comparison to Zeller is a poor-man’s Nick Collison. He has an array of post moves that can make him successful around the rim, he’s knowledgeable and he’s money from the free-throw line but he’s severely lacking in athletic ability. At best he’s a high energy guy off the bench. Against the top big men in the NBA he doesn’t stand a chance. The Sixers should use #11 on a quality scorer such as Shabazz Muhammad and try to get back into the first-round for a athletically gifted project with size such as North Texas’ Tony Mitchell.

Steve Toll:  Good. Cody Zeller is going to be a legit NBA power forward.  He might not be a good one until he is 23/24/25 but that’s not a big deal.  It is perfectly in line with the improvement curve of players his size.  I’d be totally content with picking him at #11.  That would allow the 76ers to move Thaddeus Young to small forward, FULL-TIME. Zeller, Arnett Moultrie and Lavoy Allen can fight over the 48 minutes at power forward and throw in Spencer Hawes if Bynum is re-signed.

Michael Kaskey-Blomain:  Bad. They could get some size at a better value later in the draft.

Jake Fischer:  Bad, but not for the reason that most fans think. Zeller isn’t the sexy pick for Sixers fans, because members of Philadunkia nation automatically affiliate a white center with Spencer Hawes. It’s sad, but true. Honestly, having an athletic seven-footer that has tremendous lineage and professional work ethic is never a bad thing. I just think he would have a better impact as a role player on a contender or as a rebounder off the bench. I’d rather see the Sixers go for a two-guard and say goodbye to Evan Turner instead.

3. Rumors have swirled about the Sixers packaging their two second-round picks for a late first-rounder, good move?

Jeff McMenamin:  Definitely a good move. The second-round is a crapshoot. Why not take a shot at getting an extra first-rounder where at least history has shown a greater success rate? The Sixers needs are another scorer and a big man. The plan should be to take the best available at #11. There seems to be more quality scorers then big men at that pick. It would only make sense to try and trade back into the first-round for a chance at one of the three targets at the top of Hinkie’s big man wish list.

Steve Toll:  It all depends on who they draft and how the trade would affect the future in trying to receive a late first-round pick.  It’s really tough to make that prediction right now.

Michael Kaskey-Blomain:  Depending on what they do with the pick at #11 it could be a good one. If they were to use the 11th on the best available/scorer, and then get some size later in the first-round then it may be favorable for them.

Jake Fischer:  I’ve heard some rumors from a few NBA scouts that the Sixers are interested in packaging Evan Turner and their 11th pick to move up and nab a guard, maybe C.J. McCollum. But, with Sam Hinkie at the helm of the Sixers’ board room on June 27, absolutely nothing would shock me. I’m so optimistic about the Hinkie-led front office that I’ll take anything the team does on draft night as a good move.

4. Who do you see the Sixers going after in free-agency, not named Andrew Bynum?

Jeff McMenamin:  This is a tough question to answer until after the draft, but if the Sixers don’t lock up Bynum to a deal then they absolutely need to find a quality big man who can rebound and defend in his place. I don’t want the team to go after Al Jefferson, Josh Smith or J.J. Hickson, but It’s worth a shot for Hinkie to work some magic and try to work a trade for Thomas Robinson on Houston. I’d also be a fan of the team going after veteran scorer’s with a cheap price tag such as Stephen Jackson or even checking to see what Tracy McGrady has left in the tank.

Michael Kaskey-Blomain:  Although I think that the Sixers should keep the offseason signing to a minimum in order to keep the cap open for the future, I could see the team pursuing a frontcourt option. There will be several of them on the market, and assuming they don’t re-sign Andrew Bynum they will desperately need some depth there.

Jake Fischer:  After the Draft, we’ll have a much clearer idea on what the Sixers front office thinks the team needs to add to their young nucleus of Jrue Holiday and Thaddeus Young. I just go to sleep praying that they won’t offer near-max money to Al Jefferson or Josh Smith. Those are players they should have looked to add several years ago, not now.