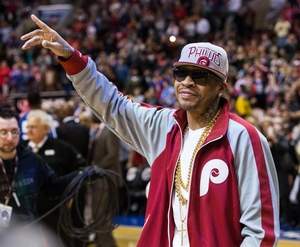 In our continuing efforts to keep you posted on the off-the-court life of 76ers icon Allen Iverson, we actually have a little bit of good news to report today.

It seems Allen will be avoiding jail time — for now.

According the the celebrity gossip juggernaut TMZ.com, shortly after Iverson’s ex-wife Tawanna Iverson filed paperwork stating that Allen owed her $40,000 in child support, Tawanna was back in court filing additional docs insisting Allen had all 5 of their kids holed up at an Atlanta hotel and refused to hand them over to their mother on the designated exchange date.

I am not a an attorney, but that does not sound like a positive series of events for Iverson.

However, according to TMZ’s sources, “The Answer” has in fact returned his kids to their mother.  Allen also testified in court that he was never holding them hostage in the first place.

More from TMZ on Allen’s latest court appearance after the jump.

According to TMZ sources, Allen appeared in Fulton County court in Georgia last Wednesday and told the judge his ex-wife had full access to their kids during their stay at the hotel and therefore he wasn’t doing anything wrong.  TMZ notes that Tawanna also testified that she could have picked up the children from Allen but didn’t want to drive 45 minutes to his location.

After “Bubba Chuck’s” latest testimony, the judge decided the former 76ers star didn’t deserve to be thrown in jail — despite his ex-wife’s request that he be put behind bars — before the hearing.  The kids — ranging from ages 3 to 16 — were returned to their mother following the hearing.

Additionally, sources connected to the case tell TMZ that Allen and Tawanna have worked out some of their issues and she has already allowed Allen to spend more private time with the kids.

There is no word on whether or not Allen has paid Tawanna the $40,000 in child support he allegedly owes her.

There has been no public comment from either side in this ongoing drama.

My question is, “What do you think all of this is costing Iverson in attorney’s / court fees?”