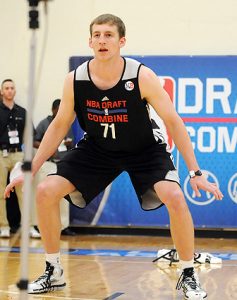 If you have paid any attention to the basketball world since 2005, you are very aware of the Zeller family.  The family’s oldest son, Luke first joined the Notre Dame Fighting Irish in 2005 before graduating in 2009.  Tyler soon entered the college realm in 2008, suiting up for the esteemed North Carolina Tar Heels.  He graduated in 2012, but not before serving as a reserve in a national championship game and being named an AP 2nd Team All-American in his senior year.

Then, along came along Cody.  After he posted a stellar freshman campaign in 2011-2012, he decided to stay at Indiana for one more season and was considered to be the front-runner for the top pick in the 2013 NBA Draft.

During the 2012-13 college basketball season, Cody and fellow top draft prospect Victor Oladipo, helped Indiana hold the No. 1 overall ranking in the AP Poll for a total of 11 weeks over two separate stints.  Tom Crean, Zeller and company earned a No. 1 seed in the NCAA Tournament and were thinking championship.  But, a sensational season for Zeller and the Hoosiers came to end in a somewhat embarrassing defeat at the hands of Syracuse in the Elite 8.

Putting IU’s “March Madness” disappointment behind him, Zeller went to work on his game and body.  All of the hours he logged were obvious during mid-May at the NBA Combine in Chicago, as Zeller tested off the charts in the Combine’s athleticism drills and physical measurements.  He did not participate in any live-ball activity in Chicago, but the reports from his post-Combine individual workouts have been stellar.

That’s good news for Philadunkia nation as nearly every creditable NBA Draft blog or website has the Sixers picking Cody Zeller on June 27th, 2013.   According to the blogosphere, the Sixers selecting Zeller is a bigger lock than Kim Kardashian having her picture taken by the paparazzi today.

Given the likelihood of Zeller becoming a Sixer, Philadunkia scribe Jake Fischer recently caught up with Cody before his workout with the Charlotte Bobcats to talk about his ongoing Draft process and the possibility of being selected by the Sixers at #11.

Philadunkia:  What teams have you worked out for so far?

Philadunkia:  At the Combine, you told ESPN’s Andy Katz that you think you could be a Stretch-4 in the League.  How can you make that adjustment?

Philadunkia:  What’s your biggest strength on the court?

Zeller:  I think just my quickness and athleticism for a big guy. I think I’ll be able to use that to my advantage to beat bigger guys off the dribble.

Philadunkia:  What do you think is your biggest weakness?

Philadunkia:  Speaking of your lineage.  What does having such a strong basketball family background add to your game and yourself as an NBA prospect?

Zeller:  I think it adds somewhat just because I’ve been able to compete with them and I grew up playing against them and everything.  They definitely helped me growing up and now I’m able to bounce some ideas off of them.

Philadunkia:  When you all get together, do you three still play out in your driveway or backyard?

Zeller:  Yeah, for sure.  It’s been a while since we’ve all been together.  But we still compete and get after it when we get together.  We’re all really close off the court, so we’ll compete and get in arguments and stuff.  But, once it’s over we’ll help each other out and talk about what works and what doesn’t, stuff like that.

Philadunkia:  Are your brothers giving you any advice at all throughout this process?

Zeller:  Not too much, they just want me to have the experience for myself.  I talked to both of them a lot while they were going through the process on their own, so I kind of knew a lot of what it was about before I even started going through it.  They talked a lot about the interviews and told different stories about people they met I think it’s really important for you to have the experience for yourself.  I’ve really enjoyed getting to go to these different cities.  I haven’t been to many of these cities before, so it’s definitely been a fun experience.

Philadunkia:  Have you been matched up with many of the same guys in your group workouts?

Philadunkia:  Do you have any connection to Philadelphia at all?  As a city, as a fan of the teams here or any previous athletes?

Zeller:  I don’t really think so.  I think my workout with them was my first time visiting the city.

Philadunkia: What was your first impression of Philly?

Philadunkia:  Did you go around the city at all?

Zeller:  Not really, we kind of had a jam-packed schedule.  But, when I was in the car from the airport to the hotel and going to and from the arena, it definitely looked like a nice city.  I’d love to be able to experience it more.

Philadunkia:  Who did you meet in the Sixers front office and what were your impressions?

Zeller:  They have a great front office.  I met with the new GM (Sam) Hinkie, it seems like he has everything going in the right direction and it’s going to be a successful organization in the near future.  He’s a very knowledgeable guy and his staff is a good group of smart guys.

Philadunkia:  You kind of grew up during the Iverson era.  Did you watch the Sixers and AI a lot when you were younger?

Zeller:  Oh yeah, he was fun to watch.  I remember watching them play the Lakers in the championship that one year.  He definitely was a talented player.

Philadunkia:  With the way today’s game operates, most prominent players have all played with or against each other in AAU and/or in high school.   Have you played with/against or know any of the guys that are currently on the Sixers?

Zeller:  I think I played against Jrue Holiday one time, but I’ve definitely spent time with Evan Turner.  He was there when Ohio State recruited me and was one of the guys that showed me around campus.  So, I know him a little bit from that.  I haven’t really talked to him since then, but I enjoyed being around him that weekend.

Philadunkia:  Unfortunately in Philly, many fans automatically affiliate a white seven-footer with a player like current 76er Spencer Hawes, who some have labeled as “soft”.  What do you have to say to those who are doubting you as an impact player in the NBA? How are you different from him?

Zeller:  I think we’re very different players and we do a lot of different things.  I don’t really see that comparison.  He’s a good player, I’m not gonna knock him.  But, I think for me I’m drawing a lot more comparisons with LaMarcus Aldrige, playing in the mid-post and being a good passer.

Philadunkia:  Now I’m not going to lie; when I see a big athletic seven-footer and I hear he wants to be a Strech-4 and not bang down low, I immediately think that he’s a little soft.  Are you afraid of contact?

Zeller:  No.  I’m a 4 kind of playing the mid-post so I can shoot the mid-range jumper and can use my athleticism to get around bigger guys.  If I get drafted by a team that wants me to play on the block, I’ll be fine with that.  I can do a little bit of both.  I played that role in college, so I can play inside.

Philadunkia:  The last time we saw you play down low in college you didn’t have a good game against Syracuse.  Do you think that hurt your Draft stock at all?

Philadunkia:  The Sixers don’t have a coach right now and it’s been reported that they probably won’t look to hire one until after the Draft.  As an incoming rookie, would that bother you to not know what coach you would be playing for?

Zeller:  Not really.  A lot of teams in the lottery are going through a lot of changes, whether that be new owners new GMs or new coaches.  So, that’s just going to be another part of the transition.  That stuff is just happening all around the league and I’m sure they’ll get a new coach soon.

Philadunkia:  The Sixers current roster pretty much has a core of an All-Star point guard in Jrue Holiday, a hybrid perimeter player in Evan Turner, a hustling undersized forward in Thad Young.  As an incoming lottery pick, how could you fit in with that core?

Zeller:  I think I’d fit in well.  There are a lot of younger guys (on the Sixers), and they’re all getting better, just like me.  It would definitely take some time for me to find my role and find my niche.  But, I’m going to do whatever the coaching staff needs me to do.

Philadunkia:  You, Steven Adams, Kelly Olynyk and Mason Plumlee have basically been grouped as the top big guys that will be available from the late-lottery throughout the late teens.  What separates you from that group?

Zeller:  I think I’ve always prided myself on my competitiveness and how hard I work.  I think that’s what teams see from me and if that’s what they want, I’m the guy for them.

Philadunkia:  Now that the Draft is just days away, how are you feeling?

Zeller:  I’m just excited for it.  It’s been a lot of hard work to get to this point; I’m just going to be excited to be in the NBA, no matter where I go and what team picks me.