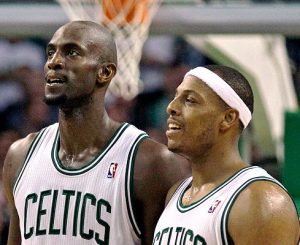 Now that the Clippers have made the colossal error of picking Doc Rivers over Kevin Garnett, the time to strike is now.

The above dollar amount is the minimum in salary the 76ers need to ship to Boston to get Paul Pierce and Kevin Garnett.  The NBA is about luck and the 76ers happen to be in the right place at the right time.

Think about how many teams (A) Have quality assets to trade, and  (B) Can (if healthy) give Paul Pierce and Kevin Garnett a punchers chance at an NBA title.  The list is very short, and Philadelphia sits at the top as the lone dog.

After the jump, let’s look at how this trade actually comes to fruition.

First and foremost, KG has a No-Trade Clause.  If he isn’t willing to give that up, this trade doesn’t happen.  Secondly, Andrew Bynum is going to have to be Hinkie’s right hand man on this one.  He’ll need to reach out to KG and Pierce and make it clear he wants to win another NBA championship.  The front office are going to need the best knee people in the world to vouch for Bynum and his ability to stay healthy.  Assuming that happens, the 76ers should be trotting out a starting lineup of Jrue, Wright, Pierce, KG and Bynum in 14-15.

The sum of those 5 salaries is $23,563,356.  Now I know what you’re thinking, “TROLL, that combination of players is worth less than nothing.  Your boy Hawes is awful.  Evan Turner makes Iguodala look like Lebron.  J-Rich has a quarter sized hole in his knee and makes $12 million the next 2 years.  Plus he has a $6 million player for 2014-15.  Kwame Brown literally wieghs 400 lbs.  Arnett Moultrie is probably going to turn into Nik Vucevic 2.0 or NOT”

Luckily for Philadelphia, Danny Ainge has backed himself into a corner.  Pierce and KG are as good as gone.  It’s now up to Ainge to try to accumulate as many assets as possible for those 2 players.  When the 76ers throw in the 3 picks from the 2013 draft, our package seems very enticing.  Boston is going to need to rebuild and this package essentially does that for them.  No other team in the NBA can beat Arnett Moultrie, 3 draft picks, a former #2 pick (who will finally get to play his natural position for a season) and all but guarantees a high draft pick in 2014 as well.

It all comes down to meetings between Hinkie, Bynum, Doctors, Pierce and KG.  Can these guys all walk out of a room and be on the same page.  Is there a coach out there that Pierce and KG want and Hinkie will sign?  What is the status on Bynum?  If things go right, this can happen.

These 2 guys are there for the taking, if Sam Hinkie has the vision.  He needs Bynum to make this work, but it will work both ways.  What better way to motivate Andrew then to dangle trotting out a starting lineup of Jrue, Wright, Pierce, KG alongside him?  What better way to sell KG and “The Truth” on the 76ers than an All-Star PG and a 25 year old who is a year removed from being All-NBA at center?

Hinkie will need to convince all of them to come here.  Once again, fans of the 76ers will need to rely upon the unreliable Andrew Bynum and the newly unknown Sam Hinkie to make dreams come true.

Here is to hoping that Bynum and Hinkie do just that.