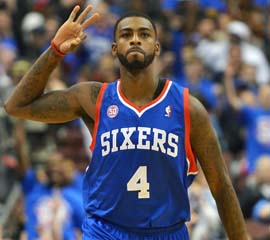 At the glorious stroke of midnight and the arrival of the month of July, Sam Hinkie fervorously rubbed his hands together and cackled into the quiet night that surrounded PCOM.  The NBA calendar had flipped to 2013-2014 and Spencer Hawes and Kwame Brown immediately became “Spencer Hawes’ and Kwame Brown’s expiring contracts.”

While the rest of the League is paying attention to what asinine delicacies and ridiculous riches several teams will offer Dwight Howard over the next several days, Hinkie and the Sixers are going to lurk in the shadows of the NBA’s crazed free-agency period like a vicious lion and wait for the opportune moment to pounce on a stupid team with a bad front office.

We know they still exist in the NBA, despite having a lockout to correct the absurd financial landscape of the entire corporation just two years ago. Yesterday, it became widely reported that the New Orleans Pelicans (aka Jrue’s new team) signed Sacramento Kings guard Tyreke Evans to a four-year/$40-48 million offer sheet.

Yet while all of these bad owners keep tossing their money around to overrated free-agents and hardly stars like Evans, it’s safe to say that Hinkie won’t be one to overpay for a “hot commodity” this summer.  He wouldn’t think that offering Kwame Brown a lucrative, long-term contract is a smart idea either.

What can we expect from Hinkie this offseason now that free agency has began? There’s five things stand out in my mind:

1) He’ll try to deal away as many “assets” while accumulating as many 2014 Draft picks as possible. Remember the Sixers were inches away from flipping a package surrounding Thaddeus Young to the Sacramento Kings for a package involving DeMarcus Cousins at the Draft on Thursday. They also were seriously close to shipping away Evan Turner and the No. 35 to a team at the end of the first round of the Draft as well. Hinkie’s first goal this offseason is to clear as much cap space as he can and to make the team as young as possible, while also stashing away plenty of future picks.

2) Hinkie will probably be one of the keenest observers of both the Orlando and Vegas Summer Leagues this month. The Orlando League, which the Sixers will compete in, kicks off on July 7. The Sixers have already compiled a pretty solid roster of undrafted rookies, including Temple’s Khalif Wyatt and Michael Eric as well as Syracuse’s James Southerland. Michael Carter-Williams, Arasalan Kazemi, Justin Holiday along with a few more pro’s are still pending. Don’t be shocked if Hinkie signs two or three of the undrafted kids to inexpensive deals sometime in late July or early August.

3) As of July 1, the Sixers had just seven players under contract if you don’t include Jrue and their Draft picks. If Hinkie is able to trade two of them away (unfortunately we’re stuck with Jason Richardson), they’ll be left with eight players under contract including Nerlens Noel, MCW and Kazemi. Add two undrafted Summer League free agents and you have 10, leaving two roster spots open for unrestricted free agents and three more spots for the inactive list. Don’t expect Hinkie to throw big, long-term money at anyone, but you could see some one-year/$6 million range deals like Nick Young’s last season. Dorell Wright will probably be the only free-agent from the team’s sad roster in ’12-13. Keep your eyes open for a guy like O.J. Mayo or Randy Foye to add a scorer that the Sixers desperately need with the departure of Jrue.

4) More front office moves (nope, still not looking for a coach). Last week, rumors flew that Sixers CEO Adam Aron was fired. And although the team came out and said that was false, don’t be surprised if the Hinkie does make some changes amongst his staff. You could see a few new faces from his old offices in Houston as well as the exile of several Rod Thorn and Doug Collins-age guys.

5) The last thing Hinkie will do is sign a head coach. If he’s not going to sign one before Summer League, there’s no reason why he would do it before everything else is set for next season. This leads me to believe the man for the gig will either be Michael Curry or Aaron McKie. But, you never know what Hinkie has up his sleeves!