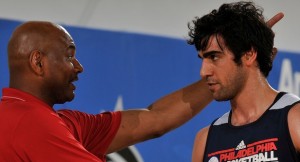 Despite a fast start by the 76ers on Wednesday, Oklahoma City, behind second year guard Jeremy Lamb’s 32 points, proved to be too much for the Curry & Co. and prevailed 74-62.

Game 3 was like watching two Olympic sprinters start out at an even pace, only to watch the opposing sprinter blow by you and there isn’t much you can do about it.

Most people when given the option choose to hear the good before the bad, so first let’s go over the positives from today’s game.  It was easily the best defensive performance of the week for the Sixers, allowing only 74 points and forcing 23 turnovers.  Philadunkia’s home team also out rebounded Oklahoma 30 to 27 thanks in part to the extended minutes of rookie Arsalan Kazemi.  Kazemi finished the game with 29 minutes, 6 points, 3 assists and 9 rebounds but not all of what he does reflects on the stat sheet.

Coach Michael Curry was pleased with Kazemi’s performance today and said “He’s amazing, just wow, everyone likes him and he plays hard and is always in the right place.”

Kazemi rated his performance post game, “I play hard and hard play translates no matter what level you play at.”

After the second half commenced the defense could only hold up so long for the 76ers.  As the 7-6 failed to execute anything on the offensive end, Jeremy Lamb unlocked the Sixers defense to spark a 10-0 run to start the half.  Lamb came up just short of his teammate Reggie Jackson’s mark of 35 set the previous day and finished with 32 points on 10-14 shooting.

The bigger concern was the lack of scoring ability by just about everyone on the 76ers.  Rodney Williams led the team with 12 points from 4-7 shooting and it just drops off from there.  Monday’s leading scorer Khalif Wyatt played more of a facilitating role today going just 1-3 from the field with 5 assists.  2013 lottery pick Michael Carter-Williams continued his poor shooting at the OPSL going 3-16 with 7 points, 4 rebounds, 5 assists and 4 turnovers.  Carter-Williams is now 15-60 from the field this week.

When asked if Carter-Williams shooting percentage is a concern Coach Curry responded “He had a low percentage, but we gave him the ball probably 10 times when there was only 8 seconds on the shot clock and told him to make a play.  So it’s not fair to blame him for that.”

The team’s most efficient offensive player this week has been Wyatt.  Today Coach Curry transitioned him into more of a floor general noting, “We all know Khalif can score that’s a skill he had coming in here but we are trying to teach him to be a better defender and better facilitator.”

The only problem with this position is no one else and I mean no one has proven they can score the ball efficiently or even get off their own shot here at OPSL.  So if Coach Curry wants Wyatt to be a floor general that’s fine, but that means Carter-Williams either improves his shooting percentage or the Sixers may not win one game this week.

You can view highlights of the Sixers loss at the OPSL here.

Philadelphia is scheduled to play the Orlando Magic Thursday the 11th at 5:00 PM.

Alex Gorge is a scribe for Philadunkia and he will be Tweeting live from the OPSL all week.  You can follow him @apg3000.