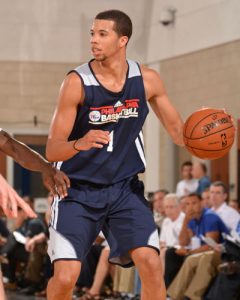 It’s thirty minutes after the Sixers third straight loss in the OPSL, and lottery pick Michael Carter-Williams emerges from the locker room with ice packs on his knees and a smile on his face.

You would think, and it would be understandable, that the 6’5 point guard would be exhibiting some amount of frustration over his summer team’s record and his personal performance (15-60 shooting).  But on the contrary, Carter-Williams’ body language is upbeat and his mind is focused on the future.  As the interview commenced, the first question I asked was about his struggles shooting at OPSL and if he attributes that to tough defense or shots just not falling.

“It’s a little bit of everything.  I’m getting the shots I want it’s just about me knocking them down,” Carter-Williams opened up.

The game of Carter-Williams has revolved around making other players better and then picking his spots to score.  The 76ers current roster, for the time being, isn’t the ideal situation for him from an facilitator standpoint.  The Sixers are in a rebuilding stage with the team sporting as much offensive firepower as your local girl’s JV basketball team.  Because of a lack of scoring options, Carter-Williams, has to carry the burden offensively in order for this squad to remain competitive in these summer league games.  Trust me that combined with the teams record isn’t easy for this ultra competitive athlete to take.

“I try to stay focused on the positive things.  Of course I want to win.  I’m one of the most competitive guys out there.  I have always been on winning teams but its not about today or tomorrow, it’s about the long process,” Carter-Williams continued.

Embracing the long process and the bumps in the road may be more important than anything for Carter-Williams to find great success in the NBA.

“Obviously I’m still learning and trying to improve a lot of things.  I am working on my jump shot and finishing better in the lane.  I think once my shot starts falling it will open up a lot more aspects of my game.”

What better time for Carter-Williams to round out his game then this upcoming year?

As new GM Sam Hinkie implements his plan to build a title contending team there will be huge growing pains.  So during next year’s transition season two things need to happen for the 76ers.  One is that Carter-Williams shouldn’t be afraid of his shooting percentage.  Philly will be terrible next year so MCW should go ahead and shoot as many times as he wants and become a more complete player from it for the future.  And two, Noel should take his sweet time coming back and just make sure he’s healthy for 2014-15.

Because after next year’s “Winless for Wiggins” campaign comes to a close, there will be expectations for signs of progress from MCW and Noel here in Philadunkia Nation.