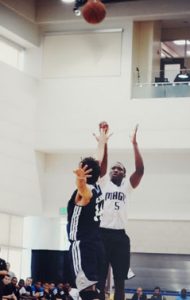 Despite outplaying Orlando for most of the game,  the Sixers dropped their fourth straight in OPSL action as the Magic’s Victor Oladipo hit a step back shot over the out stretched arm of Michael Carter-Williams to give the Orlando Magic the victory over the Sixers, 90-89.

You could argue the 76ers deserved to win this one.  This was by far the best game for the Sixers with a few key positives to look forward to going into the last day of the OPSL.

First, there was an Arnett Moultrie sighting in what looks like a turning point for the forward.  Moultrie dominated almost all aspects of the game today scoring 23 points to go a long with 12 rebounds and three assists.

His jump shot was falling tonight as he shot 10-22 from the field, with most of the misses coming from contested put backs.  Moultrie’s physical condition looked a lot better as well.

Carter-Williams had average game for himself stat wise today with 11 points on 3 of 10 shooting to go a long with 9 assists and 6 rebounds, but did pick up a blemish with 8 turnovers.  Carter-Williams seemed very comfortable in the second half using his Syracuse connection with James Southerland to help the Sixers get back into the game.  Southerland at one point had 8 straight points for the 7-6 as he finished with 15 points and 6 rebounds.

Arsalan Kazemi was once again all over the court for the 76ers with 10 points on 4-5 shooting to go along with 6 rebounds and two assists.

The Orlando Magic trio of Oladipo, Andrew Nicholson and Maurice Harkless combined for 62 points on 17-31 shooting.  The three Magic players took turns converting points but it was Oladipo who put the game to rest with 4.1 seconds left.

Philadelphia actually had a shot to win it from Khalif Wyatt in the corner, but it fell short as time expired.

You can watch the highlights of this OPSL game here.

Philadelphia is scheduled to play Brooklyn tomorrow at 4:00 PM

Alex Gorge is a scribe for Philadunkia and he will be Tweeting live from the OPSL all week.  You can follow him @apg3000.