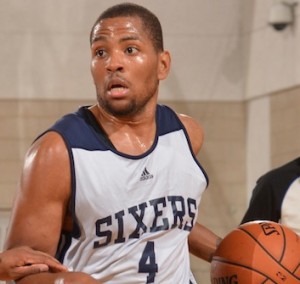 The Sixers’ week in downtown Orlando was pretty tumultuous for the most part.  Rumors swirled about the team’s head coaching vacancy, sources confirmed and then de-confirmed and then confirmed again that the Jrue-for-Noel trade became official.  On the court, the team failed to win any of their first four games and found themselves matched up with their fellow 0-4 Brooklyn Nets in the final game of the Orlando Pro Summer League.

In a week that featured some impressive performances and very competitive games, the Sixers struggled to hold their own until the second to last day of the entire league.  On Thursday, the Sixers narrowly fell to the Orlando Magic on a long Victor Oladipo step-back two-pointer.  The Sixers again found themselves in a 1-possession game in the final minute on Friday.

This time it was different, though, as the team’s string of perimeter players carried the load offensively and Arnett Moultrie, Micheal Eric and Zeke Marshall protected the basket well down the stretch, too.

The Sixers managed to hold on for an 89-86 victory, bumping their record to 1-4 on the week.

“It means a lot [to get that first win],” Michael Carter-Williams said after the game. “We’ve had a long week and for us to come here and not give up is a great thing.  We all fought out there, it was a close game and it was a tough game.  We just edged it out.”

Sam Hinkie has spoken highly of Wyatt this week and the Sixers’ Summer League head coach, Michael Curry, also was impressed with the undrafted free agent’s performance this week.

“What did he have 27 points?  We had nothing to do with that.  He has the natural ability to score the ball,” Curry said. “What we wanted to show Khalif is that he’s going to have to distribute and he’s going to have to defend if he wants to make it into the NBA.  And, if you can do those things well, then you can get onto the floor and go score.”

Wyatt feels confident in his performance, too.

“I definitely think I got better as the week got on, had fun and competed,” Wyatt said after the game.  “Coach Curry just wanted to make sure that by Day 10, we were much better than we were on Day 1.  It’s just about going out there and feeling the game out and making the right plays.”

Curry also says he saw some vast improvements from Arnett Moultrie as the week progressed, especially on the defensive end.

“Arnett got better as the week went on, especially defensively,” Curry said. “I think the last 12-13 minutes of the game was the best effort I’ve seen from him defensively all week.  That’s what we need out of him.”

With the Las Vegas Summer League kicking off on Friday, the Sixers organization has plenty to do off the court over the next several weeks.  Obviously, they still don’t have a coach, they still have to introduce Nerlens Noel and they still have to fill out their 15-man roster to reach the required NBA salary cap floor.

You can view highlights of the Sixers win at the OPSL here.