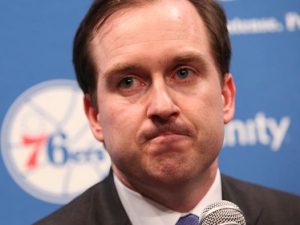 With the Eagles officially opening up practice to their fans at a packed Lincoln Financial Field yesterday, the summer for the Sixers in Philadelphia will go as it usually does, as team irrelevant.

As critics and media personalities might argue that this under-the-radar style is the best thing for the organization and that it adds to Sam Hinkie’s “genius” GM style, I for one am not there with you.

I’m as skeptical as I’ve ever been to be a Sixers reporter and fan, and there’s no reason why anyone should be otherwise.

I’m not saying that there’s no hope for this franchise and that the moves which were taken this offseason will further drive the organization into the ground, but I do think it’s time for fans to wake up and smell the coffee and to think about some serious issues facing the franchise in the future. A simple slip-up at any point could be devastating enough to cause irreparable damage.

After the jump, I’ll discuss what issues will pose the biggest problems to the teams rebuilding process…

No. 1: The teams draft picks

Five NBA teams passed on Nerlens Noel in this years draft and one thought his value was low enough to trade him, along with a potential lottery pick in next years draft, for Jrue Holiday. The Cavaliers who had the No. 1 pick in this years draft were willing to sign Andrew Bynum and his bum knees over drafting the younger and possibly elite down-the-road Noel. The Bobcats and Suns picked centers Cody Zeller and Alex Len respectively over Noel at picks No. 4 and 5, but why? Wasn’t it Noel who was being talked about the entire year to go No. 1 on draft night? Why were the Pelicans so eager to shop him?

Those are a few questions which already scare me about Noel. I’ve watched him play and agree that he can potentially be as dominating a defensive center as Dwight Howard, but I’m also scared to death that the Sixers may have traded away their best player for a player that never looks the same and a draft pick that could be outside of the lottery or just on the edge of it next year.

Then there’s Michael Carter-Williams. Where do I begin? I’ll just give you Adi Joseph’s take of USA Today, and a view (for anyone who’s followed me on Twitter @SixersBlog) that I came away with as well after watching Summer League in Orlando.

“Carter-Williams is 6-5 and long and can guard shooting guards, but his primary skill is passing. He has wonderful court vision but does not shoot or score very well and often forced it last season for Syracuse. That must change at the NBA level. Carter-Williams and swingman Evan Turner are similar players.”

Sure, there’s plenty of time for development here for Carter-Williams, but the similarities between him and Turner are already there. There’s a lot of negatives at the moment with Carter-Williams. He’s a lanky point guard who can’t shoot, he isn’t strong enough to attack the rim, he turns the ball over a lot and he often makes head-scratching plays on the offensive side of the ball. Go to the 8:55 mark in this video (http://www.youtube.com/watch?v=plP3GlYKFQU) and you’ll see how NBA teams will make Carter-Williams’ life miserable in the NBA, like everyone has seen already in Summer League and if you watched him at all last season at Syracuse.

NBA coaches aren’t stupid and the level of competition is obviously much higher. Teams are going to send doubles on Carter-Williams and trap him into making bad decisions on every play. He’s not strong enough yet to really penetrate defenses and his shot needs an ocean size improvement.

He’s a project in every sense of the word.

It’s a valid question. The Sixers can find a quality player to build around for the future with the top five selections in next years draft. After that it’s a crapshoot once again. For example Glenn Robinson III, who the Sixers were projected to take at No. 11 this year before he decided to head back to Michigan, is projected by NBADraft.net to go at No. 6 next year. Would you really be thrilled if he’s the best available for the Sixers after they win a few more games than expected next season?

Then there’s the New Orleans Pelicans. Couldn’t a lineup of Jrue Holiday, Eric Gordon, Tyreke Evans, Ryan Anderson and Anthony Davis conceivably win enough games to give the Sixers a pick outside of the lottery next year?

Really these things are not out of the question. As I said before, a slip-up at any point of the rebuilding process could be devastating to the Sixers future. You can’t force professional athletes to lose. You can try to assemble the worst team possible, but even then it must be carefully done because the goal is always for the future.

The easiest way to tank would be to get rid of Thaddeus Young, Evan Turner and Spencer Hawes before the season, but the likelihood of that happening is slim to none. Those three players alone could win you a couple more games here and there that you didn’t expect and depending on the Sixers’ new coach, that could win the team a couple more games as well. Contrary to what fans believe, tanking for the worst record in basketball is sometimes harder than ending the season with the best one.

Has Philadelphia ever been a destination for free-agents?

Outside of signing Elton Brand to a 5-year, $80 million deal, none stick out in my mind in the past 20 years of the franchise. Brand was also largely considered a risk to sign after a torn Achilles injury, so it wasn’t necessarily the smartest signing the team has ever made, and ultimately considered a catastrophe after the amnestying of Brand before last season. The Sixers also paid out “quality” FAs such as Glenn Robinson at the end of his career, Matt Geiger to 6-years, $51 million, Kenny Thomas to 7-years $50 million, Samuel Dalembert, Kwame Brown and Scott Williams.

Needless to say, no matter how much money Hinkie is willing to offer to the top free-agents in the next few years, Philly isn’t high on the list of destinations for most and unless Andrew Wiggins or Jabari Parker are taken in next years draft, I don’t see the top guys wanting to come here. A certain type of player will go to a team simply because they offer the most money, but in today’s NBA it seems like the top talent goes to the team which gives them the best chance to win or offers them the best lifestyle both on and off the court.

If Thaddeus Young and Evan Turner are the biggest trade assets for the Sixers, that’s a scary thought. Especially considering the rumors that neither were able to be dealt on draft night, even though Hinkie was making countless phone calls to front offices across the league.

If you can’t get good through the draft or free-agency, the other way is through trades. Besides future draft picks, which the Sixers need to desperately hold onto for the development of the franchise, the 7-6 don’t have much to offer. Young has too big of a contract for teams to take on, despite his value as a player. Turner could be a high energy guy on a teams bench to play defense, rebound and distribute the ball effectively, but as a No. 2 pick the Sixers expect to get more for him than most teams are willing to dish out. He also comes at a high price tag.

Spencer Hawes is a solid scorer and rebounder, and has an attractive expiring contract, but is widely seen as a defensive liability who is also too soft on the offensive side of the ball. He’s not the type of player that teams are exactly lining up to try and make a trade for. I don’t see him being moved this season.

As for Arnett Moultrie, Lavoy Allen, Jason Richardson and Kwame Brown, they’re all not going anywhere. Moultrie will be part of the rebuilding process, Allen will play out the final year of his rookie contract and Richardson and Brown are too old and expensive.

There’s a good chance that all of the above mentioned are still with the team during the entire 2013-14 campaign. Hinkie had his best shot on draft night, and outside of furious campaigns from Turner and Hawes before next years trade deadline, I see them all in uniform next April.

All of the above reasons will continue to make me a skeptic.

I want to believe in the Sixers again, as much as I believed that Evan Turner could be a franchise player and Andrew Bynum could make the Sixers contenders again.

This Sixers team does have the chance to potentially be great if a lot of cards fall into place. Being very bad is first and getting a little luck is second. Nerlens Noel could potentially become a Dwight Howard-like dominating defensive force; Michael Carter-Williams could gain 30 pounds, find a shot and become the second-coming of Anfernee Hardaway; the Sixers could pick Andrew Wiggins at No. 1 next year; top-tier free-agents could want to play with these guys; Brett Brown could become coach and bring coach Pops’ winning ways to Philly, etc. etc.

Bottom line is there’s the potential for greatness, but the Sixers are far from that point where they currently stand. Say some prayers, have your good luck charms handy, do some good deeds and maybe just maybe the basketball gods will send some good fortune towards the red, white and blue. But, I’m never going to chant the phrase “In Hinkie We Trust” until I see some progress and results. In Hinkie I question.