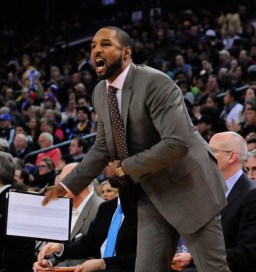 Since Larry Brown departed after the 2002-2003 season the 76ers franchise has struck out more times than Ryan Howard at trying to land the right man for Sixers head coaching job.  In fact, the 76ers have tried out 7 different head coaches since 2003, none lasting longer than three seasons.

This summer, with Doug Collins leaving the bench after a dismal 2012-13 season, new General Manager Sam Hinkie has the task of bringing in the Sixers’ eighth head coach since Brown left what was then the First Union Center – yes, it was THAT long ago — and he’s captured the entire basketball world’s attention with his due diligence process.

Hinkie had this to say about filling the head coaching position at Nerlens Noel’s introductory presser last week:

“I’ve seen very strong interest in all the people that we’re talking with in part because I think they see what we’re trying to do.  It’s fairly obvious what we’re trying to do over time.  We’re trying to build something special.  And believe it or not, that’s pretty enticing for a lot of coaches out there.  I doubt this is a surprise at this point, that we’re going to follow a really methodical process.  So when we’re sure we have the right person, we’ll do it.”

With all of the above in mind and Yahoo’s Adrian Wojnarowski’s latest update that Portland Assistant David Vanterpool (pictured on homepage) has emerged as a serious candidate for the job.  With this latest “rumor”, I say we move on from any discussion that involves the idea that Michael Curry could be the next leader of this team.

Hinkie wants someone that will help push this organization towards contending within the next five years, someone who will develop players, someone who can fix the glaring gaps in Michael Carter-Williams’ and Noel’s respective games.  That person is either Brett Brown or Vanterpool.

Among many other roles with the Spurs, Brown is currently the heir-apparent Assistant Coach to Greg Popovich. Previous to joining the Spurs bench, Brown spent 2002-2006 as the Spurs’ Director of Player Development.  Vanterpool reportedly played a huge role in Damian Lillard’s progression last season.  Prior to his current job in Portland, Vanterpool had served as the Thunder’s Director of Player Personnel.  Basically, both of these guys have experience in evaluating and developing players and will continue to do so for whichever NBA franchise employs them.

Curry would only be a man in charge of bringing this tanking ship deeper and deeper below the surface of the Atlantic (Division).  He would be a good option for people who are all about the fully tanking for Andrew Wiggins and the rest of the loaded 2014 Draft class.  But Hinkie isn’t your typical GM.  He’s not just tearing down this team, he’s rebuilding.  Hinkie is attempting to change it’s identity by moving out expensive and expendable pieces and replacing them with young, high potential assets and extra draft picks.

Hiring a guy like Vanterpool or Brown will help Hinkie ultimately accomplish that goal, not Curry.

So, say goodbye to Curry in Philadunkia nation.  He’s been a great “company guy” this summer and for that we tip our cap to him, but he is not going to be the next head coach in this franchise’s history.