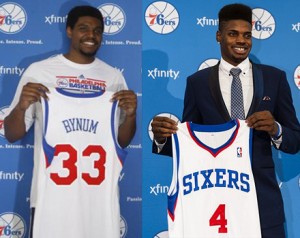 Nerlens Noel is not Andrew Bynum.

He never has been and he never will be.

But to behoove those who believe strongly that the above statement is false, here are the few things the two young men actually have in common:

They’re both African American; they both are from the East Coast; they both attended more than one high school; they both were big names on the grassroots hoops scene; they both were first round NBA Draft picks, they both play center, they both have interesting hair; and they both had knee injuries upon arriving in Philadelphia via a trade for an All-Star caliber 76er.

But that’s where the extremely vague comparisons end.

First of all, they’re completely different players.  Andrew Bynum, when healthy, was the most dominant back-to-the-basket post player in the league in 2011-2012 — a season in which he was named the starting center for the Western Conference in the All-Star Game.  Bynum also has a pretty reliable 15-foot jumper for a 7-1, 280 pound big man.  On defense, he was a good-but-not-great shot blocker when he was able to make weak side rotations.

Nerlens Noel may have one or two post moves in his repertoire, if that, with his back to the basket.  He excels more as a screener 15-20 feet away from the basket where he then dives hard to the rim or pops and looks to drive around slower defenders.  That’s pretty much his entire offensive game outside of slamming home dump-off passes in the lane. Defensively, he’s a rim-protecting freak of nature who covers so much ground on rotations it’s scary after watching several minutes of tape.

Physically, they’re completely different as well.  We already noted the monster of a human being Bynum is out on the court.  When Noel is at his ideal playing weight, he’ll likely have 235-245 pounds on his 7’0 frame.

Character wise, Bynum was a selfish kid who was handed a multi-million dollar contract at 17 years old right out of high school who has a well-documented history of being lethargic and disinterested.  Nerlens Noel comes from a nurturing family and spent a season under John Calipari’s demanding watch at Kentucky where he had to balance schoolwork (well, you know what I mean) and basketball all at once.

Injury wise, Bynum’s knee problems are chronic.  He has no cartilage left in his knees and after one practice and a  5-on-5 scrimmage last spring, his knees swelled up so bad he could barely walk the next day.  This injury does not have a previously proven-successful recovery program.

Nerlens Noel tore his ACL at 19 years old and apparently has a “pristine” post-op knee according to both his surgeon, Dr. James Andrews, and his rehab specialist in Birmingham, Alabama. vHe’s rehabbing 6 times a day and following a similar routine that Adrian Peterson used to come back from the same injury and rush for over 2,000 yards in 2012-13.

Lastly, their roles on the Sixers are completely different.  Andrew Bynum was supposed to be the immediate savior of the franchise who took them from good to great — or at least to somewhat contenders status.  Nerlens Noel is a building block who will be called upon to anchor the Sixers defense and hopefully be a rich-man’s Tyson Chandler if he develops anything close to an offensive game.  He also will have 3 or more other high draft picks (again, hopefully) around him to share the load of rebuilding this franchise.  Bynum was expected to essentially be partners in crime with just Jrue Holiday.

Yes, these two players do have plenty in common.  But when you take a deeper look, they’re more dissimilar than it might seem.

Further, fair or not, they’ll likely be linked together in Philly for many years to come.  We just have to wait and see how Noel’s time in Philadunkia nation pans out.