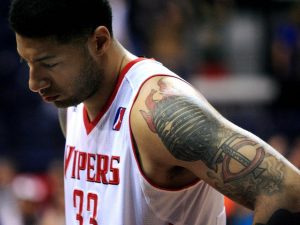 From a basketball perspective new 76er Royce White, who once was considered a top 5 talent in the 2012 NBA draft, could be a huge addition to the Sixers front court.

As a high school kid, White was named “Mr. Basketball” in the state of Minnesota and he averaged 13 points 9 rebounds and 5 assists per game with Iowa State.  Last season in 16 games with Houston’s D-League affiliate, White had averages of 11 points, 5.5 rebounds and 3 assists per night.

Statistics like these from a power forward who allegedly “can’t shoot” are outrageously impressive.    But imagine if he added a shooting stroke — White’s ceiling would be ridiculous.

Still, if the power forward is ever to get on the court in the NBA and realize his potential, the 76ers need to equip White with every tool possible to help him best deal with the mental health issue that his holding back his NBA development.  White’s condition which is commonly referred to as general anxiety (specifically for White it is the anxiety of flying) and as we all know, it keeps him from traveling to games with the team.  Sam Hinkie & Co. will now go down in the history of the NBA for implementing the first “system”, good or bad, for dealing with general anxiety in a player.  Thus, White’s career, fair or unfair, will affect the career of every future NBA player with a mental health issue.

On a recent pod cast with Landolakers.com White talked about everything regarding his mental issue and his plans to get on the court this year for the 76ers.  After the jump we’ve transcribed for you some of his quotes from that interview and provided some reacts to the power forward’s words…

Landolakers.com:  How are you doing dealing with your anxiety right now?

White: “I’m doing well, I’m very fortunate to have been open about seeking help with my issue since I was very young.  Now if something ever happens where I have trouble dealing with it myself, I have a number of doctor friends I can call on to get there advice to help me deal with it.  There is a great chance I play for the Sixers, I am confident in my situation.”

Philadunkia Notes: This has to be encouraging news for Sixer fans.  Understandably the first year in the league for White was going to be somewhat of a crapshoot in how an NBA team dealt with this issue.  Going into year two it sounds like White, for the most part, knows exactly what situations cause him stress and how to deal with it.  Not saying that makes it any less difficult, but it may make it a bit easier in letting the Sixers know what accommodations need to be made to avoid these triggers.

Landolakers.com:  Are you prepared to go through a certain extent of discomfort to fulfill your NBA career?

White: “I’ve accepted that I will endure a mild amount of discomfort and have previously said I will fly with the team on days with back to back games.  When I was in the D-League the Rockets provided a bus for me to travel on for most of the games and it worked out well for me, I like being on the road.”

Philadunkia Notes: Again this is good news for the 76ers.  It isn’t as if he is starting all over with this process with Philadelphia, GM Sam Hinkie came from Houston and already has a great relationship with White.  It’s clear that Hinkie thinks White’s potential is worth the risk and will look to improve upon the accommodations made in Houston last year.  With some luck, Hinkie could be the perfect man to set up the first clear cut process in helping White and future NBA players deal with their respective mental issues.

Landolakers.com:  Do you think the NBA is well equipped to deal with this situation and do you think the league has a priority in dealing with player’s mental health?

White: “Anytime your business is based on human beings as commodities, their health will never be a top priority, that’s just the truth.  The NBA is a league of 350 players, if they choose to discriminate against players with mental health issues that will be just a short term solution to a long term problem.  Meanwhile they will be bleeding internally because future players won’t admit to having mental disorders in order to pass the draft process.  At that point the overall issue will just become worse and worse.”

Philadunkia Notes:  This is absolutely true.  The NBA could solve a huge potential problem beforehand by getting proactive in treating this issue. The NFL swept the concussion cases under the rug before reacting too late and it led to a number of lawsuits.  If players draft stocks are affected by having a mental issues then White is correct in that they won’t come forward, which will lead to an immense amount of cases entering the league that will not be dealt with properly.

Landolakers.com:  What kind of talent do you think you can be in this league?

White: “I was projected as a top 5 pick for a reason, it wasn’t based on potential like you see with a lot of guys.  I showed production and my body type transitions to the NBA well.  My game is the type that will always be valued in this league.”

Philadunkia Notes: For a guy who has severe anxiety, the confidence he has in his game is something all basketball fans can appreciate.  Imagine an Al Horford type player who can dribble on the break.  Take away the jump shot, for now, and that’s the player White can become.

For Sixer fans, the reward far exceeds the risk.

You can listen to the entire landolakers.com podcast with Royce White here.