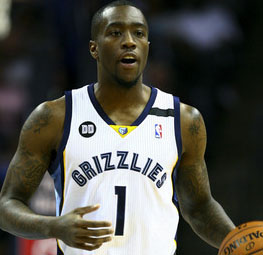 For years, the 76ers have been lacking direction.  Ever since that fateful night in December 2006 when Billy King gave Allen Iverson a subtle athletic butt-slap on his way out the door to Denver, the Sixers have been wandering through the desert searching for the Promised Land without a leader and an organized forward movement.

Enter Sam Hinkie, kick out Jrue Holiday, clear the front office and coaching staff and introduce Brett Brown.  There’s suddenly a movement in the Wells Fargo Center and the Shipyard offices that is constructively building towards a championship future.  And, today’s addition of Tony Wroten, Jr. is just another example of the identity this organization has now assumed.

They gave up nothing for a 6-6, 20-year-old, former first round pick.  Well, that’s not entirely true.  They gave up a Top-50 protected second round pick.  Meaning, if the Sixers aren’t one of the 10 best teams in the League next season — SPOILER: they won’t be — they get Wroten for free.  Hinkied!!

This organization now screams, “player development.”  It’s not just Sam Hinkie.  It’s Brown’s experience working with the Spurs and the team’s recent track record of acquiring young, talented, lengthy, and athletic players who have potential to turn into polished contributing pieces.  Wroten is just the latest move and it comes as a bit of a monkey wrench, which we’ll explain in a moment.

Wroten is a project, but there’s a LOT of talent there. Philly a good landing spot for him because they’ll be all about player development.

The Sixers have basically become the Houston Spurs. Hinkied.

While many members of the media and fans simply expected the Sixers to bring in a veteran point guard like Quincy Douby or Chris Duhon on a one-year contract to backup and “mentor” Michael Carter-Williams, Hinkie decided to go with the Chip Kelly route.   He’s now introduced the element of competition into what is going to be a tumultuous rookie season for the No. 11 pick in this year’s Draft.  Instead of just assuming the role of starting point guard, MCW will now essentially be competing with Wroten, another 6-6 point guard, everyday in practice.  Don’t be fooled, MCW will be this team’s starter, but implementing a competitive atmosphere and dash of fear into PCOM will help get the most out of the team’s young players.  It’s likely the same reason why they’re keeping Kwame Brown under contract, to create a level of competition in training camp among the team’s crop of unproven big men.  You know, that group that includes Spencer Hawes, Arnett Moultrie, Lavoy Allen, Tim Ohlbrecht and Royce White.

Hopefully in Philly, Wroten, along with the rest of the Sixers, will only move in one direction: forward.  And of course, they’ll be heading down that path via the Hinkie way.