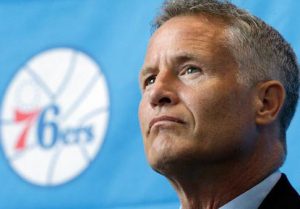 On August 14th, the 76ers announced they had hired Brett Brown as  the team’s newest head coach — the 8th since Larry Brown left the franchise in 2003.

During Brett Brown’s presser at the Wells Fargo Center that day, the former San Antonio Spurs assistant coach proclaimed his expertise in player development, spoke about his excitement for his new gig and the enticing prospects on the Sixers roster he is inheriting.  Overall the reaction to Brown’s statements at his introductory press conference was very positive.

Last week, Brown appeared on two local sports radio programs and spoke more about the Sixers roster, the organization’s direction and player development.  Brown joined Mike Gill of 97.3 FM ESPN in Atlantic City on Tuesday to and on Wednesday Brown called in to the  94WIP Morning Show that was missing Sixer hater Angelo Cataldi.  Once again, Brown was impressive under the scrutiny of the Delaware Valley’s main stream media.

After the jump, we present the best Q & A’s from those two radio interviews as well as my own analysis for a number of Brown’s quotes.

97.3 ESPN:  Even though it seems like this may be a struggle of a season, it seems like there’s excitement around the team.  Do you feel that as well in the few days you’ve been here?

Brown:  I do.  I just feel that the realization that we’re starting from effectively ground zero, that we’re all experiencing a legitimate rebuild, it creates promise and it creates hope in such a competitive and proud city.  It’s one of the main reasons that I accepted the position.

Philadunkia Notes:  For a team that’s been starving for an identity for the better of seven years ever since Allen Iverson was shipped to Denver, Brown seems poised and excited to embrace the Sixers’ rebuilding identity.  He also seems legitimately exciting about growing with this young group of players and being apart of situation where the team’s fan base can watch them grow as well.

97.3 ESPN:  What excites you about the roster of guys that you currently have?

Brown:  I think the unknown of the talent level of the people that I’ve inherited is exciting.  You always wonder what the potential limit is and how much time people are willing to invest to get better.  On Draft night, you sit in the back of the Spurs room and you quietly sort of take notice of how Sam and the owners are building this team.

Philadunkia Notes:  Brown is clearly on board with what Sam Hinkie and Josh Harris are trying to orchestrate in Philadelphia. His answer to Gill’s question showed his true player development colors and his faith in the front office.

97.3 ESPN:  How about the guy that remain from Doug’s tenure.

Brown:  I’ve always had a fascination with Thaddeus. I was going into my 13th season [with San Antonio], and the way that we designed our staff was that we divided the league up into the thirds and Philadelphia over the past six or seven years have been one of teams [I’ve scouted]. He’s a good person and I think he generally cares.  All of those things add up to a prospective leader and a I person I can lean on.

Philadunkia Notes:  As many noted during Brown’s presser, the new head coach seems enamored by Thad Young. With that in mind, Brown’s confidence in Thad as a leader could ultimately become a roadblock in trading him, as Hinkie so adamantly tried to on Draft night.  We shall have to wait and see.

97.3 ESPN:  When you see Evan, does he remind you of somebody? Have we not seen what maybe he can be?

Brown:  My first reaction to that would be what I remember in a young Richard Jefferson. Richard at one point was an All-Star.  I see similarities with a Kawhi Leonard.  You see him rebound and lead the break and you seem him bring the ball up the floor, where he just has a natural talent to have a little bit of point guard in him.  You see the improvement of his shot where he’s able now to shoot corner threes like a shooting guard.  And when you seem him as a three, he’s a big man like Richard was or Kawhi Leonard where he can go post.  I see a real versatile player and I know when I get to coach him more you’re going to identify more strengths.  His better strengths are obviously ahead of him.

Philadunkia Notes:  Hopefully Brown can work with The Enigma enough to boost his trade value before the deadline.

97.3 ESPN:  How come it took so long, in your opinion?  Why was it such a long process, more on your end, more on the Sixers end?

Brown:  I think initially it was there call.  I was sort of just going through the process as they directed and I feel like it’s a reflection of Sam Hinkie and the new direcition of ownership where they’re very process driven, they’re very patient, they’re not reactive.  All of their moves across the board come with an extreme amount of due diligence.  I fell into that bucket where they were trying to identify the proper coach.

Philadunkia Notes:  Brown’s answer is just another example of the diligent and well-calculated process this ownership group and front office are going to use to rebuild this franchise.  I’m an enormous fan of that method.

On Wednesday, Brown joined Spike Eskin and others on 94.1 WIP Morning Show on Wednesday, where he discussed his early action plan and other hot Sixers topics.

WIP:  When you take over a job with this much work to do, your first week on the job, what is the most important thing to do first?  What’s this first week been like?

Brown:  It’s very intimidating because you have no staff and you’re trying to do a good job to get the right people. When I say staff, you’re really talking about the bench coaches, the developmental coaches, the video room, trying to have some feel for what the NBDL program is going to look like.  So you get to a number of anywhere from 9 to 12 people that you really have to be selective on hiring.  My first call was to our strength and conditioning coach [Jesse Wright] where we discussed my philosophy in regards to fitness and the importance we’re going to place in these guys’ health.

Philadunkia Notes:  As was reported this week by the Philadelphia Inquirer and expected by us here at Philadunkia, Brown decided not to retain Michael Curry, Aaron McKie and Jeff Capel.  His thoughts on WIP further expressed his and Hinkie’s mutual interest in athleticism, player development and employing a staff to help bolster those concepts within the organization.

WIP:  How does analytics fit into the whole scheme?

Brown:  I feel personally very curious.  One of the things that excited me is I, in many ways, have hitched my car to Sam Hinkie.  The faith that I have in him, helped me make this decision.  I feel like he can make me a better coach, I want to know what he knows in regards to analytics and be able to take that side of sport and apply it to how you really think the game should played and what you’re going to prioritize.  I feel like you have to make decisions with the numbers.

Philadunkia Notes:  Basically, we won’t be prisoner to the long-two anymore. Hip-hip hooray!

WIP:  Is it going to be a defensive style [of play]?

Brown:  I am a defensive coach. I think people often times confuse that with winning 78-74 or losing 78-74.  I don’t think that.  We did it with San Antonio, we were always one of the League’s best defensive teams but we got out and ran and we cultivated our offense out to Tony, Timmy and Manu.

Philadunkia Notes:  Brown’s answer bodes well for the argument that the Sixers and Hinkie are trying to build an athletic defense-first roster that will create a lot of transition opportunities.

WIP:  Coaches want to win.  How hard is it going to be for you when you can envision success but you can’t quit get the guys there yet to keep that sort of focus.

Brown:  To say it won’t be hard is not right.  I think it’s really important for me to stay on track and to exhibit the patience that I’m challenging everyboy with.  I think the city, management, owners, the head coach, the players; the pain of losing is real. I’m going to place a ton of emphasis a lot of the time on development.  With the measurements, with the day to day work, getting on them, giving them a hug, telling them the truth; all those things that we know we need to do to get them improving.  I will do everything I can to keep the locker rom and the players together and to make sure that they know that I am with them, that the coaching staff is with them.

Philadunkia Notes:  Brown built a reputation in San Antonio as a players’ confidant and a coach that could really relate to young guys and get the most out of them.  With his instant ability to answer a pretty tough question from Eskin, Brown displayed his vast knowledge on how to get through to young guys.  That will be an essential key with MCW undoubtedly gets frustrated during long losing streaks.