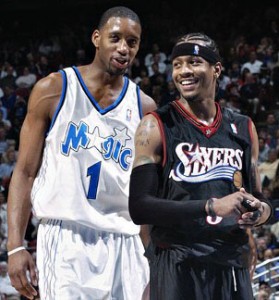 Iverson was more of a transcendent icon than he was a phenomenal basketball player.  What he accomplished at the small height of six feet — which we all know is a fib — is what catapulted him into sports history. You know what?  Screw sports history.  American history.

It’s what makes Iverson a cold-stone-lock Hall of Famer and separates him from the likes of Tracy McGrady.

McGrady was very successful in his own right, appearing in the All-Star game seven times, winning two scoring titles, earning two-time First Team All-NBA selections and currently ranking 57th All-Time in career scoring.   Additionally, McGrady is one of only two players in League history to notch at least 32 points, 6.5 rebounds and 5.5 assists per game over a full season.  The other is Jordan (That fact via Tom Beer at Hoopsworld).

Both multi-time All-Star guards announced their retirements over the past week.  It wasn’t a coincidence that they made their respective announcements in completely opposite ways either.  TMac appeared on ESPN’s nationally televised First Take to break the news while AI simply let my man Tzvi Twersky at SLAM drop the hammer on SLAMonline.com.

If McGrady casually told a writer that he was retiring, sure the basketball world would have noticed.  But, he needed to go on national television to maximize his attention.  AI’s news leaked out on Twitter and almost broke the Internet for a few hours.

Yes, they were both shooting guards and multi-time scoring champions, but only Iverson singlehandedly carried a team to the NBA Finals.  Only Iverson can house an MVP trophy in his home.  Only Iverson was the sole face of a sporting equipment company for a decade.  Only Iverson graced the cover of SLAM 13 times.

It was Iverson who was the spark plug for the hip-hop infusion into the NBA—a culture that has forged the League into the pure form of entertainment it is today.  People can criticize NBA players’ strive for personal brands and glowing legacies, but it’s created a level of competition and an atmosphere that’s bred the ultimate form of athleticism on the hardwood and set up the League for the greatest NBA season since 1996.

Thank AI for that culture.

Iverson was a face-of-the-franchise superstar talent from 12 years from 1997-2008.  McGrady was only at that level for 8 years from 2001-2008.  And for the first half of this millennium’s first decade, Iverson was a must-see show and a must-have ticket.  McGrady was always a second-tier player and an athlete that allowed fans and media to take him for granted.

Sure, both players could have monumentally surpassed the peaks of their respective careers.  If AI ever acknowledged the necessity to become more of a team and role player and assumed that identity, maybe he would still be on an NBA roster today.  Maybe he would be the sixth man on a legitimate contending team.  If McGrady could have found the balls to lead one of his teams past the first round, he could have catapulted himself into the upper-echelon of players we always remember.  McGrady lacked that extra something that LeBron James has suddenly discovered and that has pushed Kobe Bryant into another stratosphere of NBA history.

But with Iverson, we saw him carry an entire city’s grievance and tumultuous history to the sport’s biggest stage.  If you ask any serious basketball fan to name five of Iverson’s most legendary playoff performances, it’s an easy task to come up with more.  A quick YouTube search shows that McGrady has had similar games, but outside of TMac’s 13 points in 33 seconds vs. San Antonio, his moments are a struggle to recollect.

And, I haven’t even mentioned the word “practice.”

Now if you think I’m making this argument just because I grew up idolizing Iverson and he was my Twitter background for a good eight months (before I moved on to Nerlens Noel and MCW), check out ESPN’s 5-on-5 about the little man’s legacy.  Everyone who truly understands the beauty of the game of basketball knows how important Allen Iverson was to the sport.  If you’re writing a history book on each decade of the game, the 2000’s would devote far more words to Iverson than to McGrady and that’s indisputable.

Today, you can tell Iverson feels incomplete with the way his career ended, final years that included a whirlwind of broken bridges and a drive-by of international games.  But the way McGrady carried himself during this year’s playoffs and on First Take this week, he seems content with how much he accomplished and equally failed to achieve.

Doesn’t that in itself show the chasm between these two players?