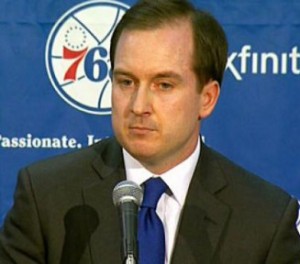 Whomever the 76ers select at or near the top of the 2014 NBA Draft next year, that player will face the tremendous challenge in leading this organization to an NBA Championship.  Despite what Sam Hinkie and Joshua Harris have promised to everyone involved in the organization, the odds of a top 5 pick winning an NBA title with the franchise that drafted him are long – very long.

There is this thought that not only will Sam Hinkie draft the right guys, but that he will also do something that has been historically near impossible to do.

Look at the NBA draft from 1990 through 2009.  In the past 20 years, take a wild guess how many players picked in the top 5 have won an NBA title with their original team while contributing (here’s looking at you, Darko).

After the jump, I’ll give you the answer to that question as I take a realistic look at why Sam Hinkie and his To Be Determined player from the top of the 2014 Draft face the utterly impossible challenge of leading the Sixers to the Promised Land again.

In total, only 11 guys picked in the top 5 of the NBA Draft between 1990 and 2009 have even made it to the Finals with their original team.  Here is the best of the best of the top 5 picks from 1990-2009 who didn’t make an NBA Finals with their original team: Mutumbo, Webber, Grant Hill, Kidd, Garnett, Ray Allen, Camby, Billups, Vince, Brand, Tyson Chandler, Pau, Yao, Bosh, CP3, Deron, Aldridge, Horford, D-Rose, Kevin Love, and Griffin.  If you’re familiar with basketball, you see that only the last five guys can move from this paragraph to the ones below with Rose and Griffin being the only two with a realistic chance to do so.

So you’re left with Durant, Westbrook, Harden, Lebron, Dwight, Iverson, Shaq, Penny and Gary Payton.  These guys all made the finals with their respective teams, but didn’t win.  That’s pretty good company and shows how tough it is to win an NBA title.  Iverson did it in a terrible conference and a wholly underrated supporting cast.  Shaq+Penny like KD+Westbrook+Beard did it together.  Payton did it with Shawn Kemp who was the best player in his draft but was the 17th pick.  Lebron willed his team to the finals and D12 led a super hot 3-point shooting team.  That is it.

Which leads us to the final 2 players, guys who won a title on a team that picked them in the top 5 from 1990-2009.  Their names are Tim Duncan and Dwyane Wade, guys who won under extremely unusual circumstances.  What is interesting is, I’m not sure which guy’s championships are more unusual.

The right place and the right time, can’t be overstated with these 2 guys.  Tim Duncan got the Admiral and the starting backcourt from the All-Euro history of the world team.  Dwyane Wade got Shaq, the refs, Lebron James and Chris Bosh.  So like I said, I’m not quite sure which player had a more unusual, dare I say fortunate, perhaps even lucky, path to an NBA title.

What I am sure of is that Sam Hinkie and his 2014 Lottery pick will need a similar amount of good fortune if they are to bring a title home to  Philadunkia nation.