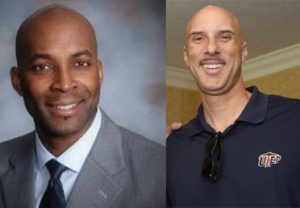 It appears the 76ers have made two new additions to the organization in the last 24 hours as Sam Hinkie and Brett Brown continue to assemble their lieutenants.

Last night on Twitter, Zach Lowe (@ZachLowe_NBA) tweeted that Brandon Williams, the NBA’s Associate VP of Basketball Operations and a former Spurs roster member has been hired for a “key position” under General Manager Sam Hinkie.

It was also reported online yesterday by Anthony Salom of the UTEP men’s basketball blog Miner Rush that UTEP assistant coach Greg Foster has been offered a job on the Sixers coaching staff.

The 76ers have yet to comment officially on either of the rumors, but according to multiple NBA contacts of mine, the reports are accurate.

Williams comes to the 76ers from the NBA offices in New York where as the NBA’s Associate Vice President of Basketball Operations, Williams, according to his online bio, was responsible for overseeing the Standard Observers Program, evaluation and monitoring of officiating performance and the quality of game play, in addition to monitoring matters of player conduct, and discipline.

Prior to joining Basketball Ops, Williams was part of the NBA’s Community and Player Programs department as a Director of Player Development.  In that position he was responsible for managing the team player development relationship for several NBA teams.

Also according to his bio, as a member if the 1999 Spurs’ championship team, Williams, “worked to implement tactics from daily practice and game plans to prepare all rotational players for competition”.   He also had a lead role in playoff preparation, “with specific emphasis on offensive attack” during the Western Conference Finals vs. the LA Lakers and NBA Finals vs. the New York Knicks.  Basically he was a deep reserve working on the scout team.

He also had cups of coffee with the Hawks, Bucks, Knicks, Raptors and Sonics.  Additionally, Williams played internationally in  the Philippines, France, Greece, Germany, Italy and Israel.

Salom at Miner Rush posted the following on Foster’s addition to the Sixers coaching staff:

“According to sources close to the program, UTEP assistant coach Greg Foster has reportedly been offered a job by the Philadelphia 76ers, and he has accepted the position. His official title isn’t known at this point, but it is apparently a done deal.”

Many of us remember Foster from his long, journeyman career in the NBA — 13 years across 9 different teams (Bullets, Hawks, Bucks, Bulls, T-Wolves, Jazz, Sonics, Lakers and Raptors).  Of course most of our memories of Foster come from his two trips to the NBA Finals with the Stockton and Malone led Jazz teams.  He was also a member of the Lakers’ 2001 world championship team.  Foster owns NBA career averages of 4 points and 2.6 boards per night.

Foster comes to the Sixers after three years with the Miners coaching staff in various capacities.