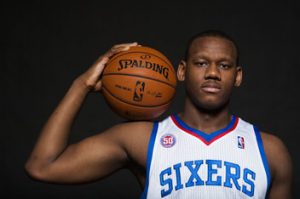 Every single player in the NBA will tell you, that it’s a long road full of hard work to get to where they are today.  There are plenty of dreamers in every city in America who hope to one day make it to the League, spending hours and hours each day perfecting their craft in order to move themselves closer to their ultimate goal.  Some have the height, some have the talent, some have the heart and determination, but a very minuscule number actually get the chance to play in the League and an even smaller number actually get their names called on draft night every year.

Lavoy Allen is one of those exceptions.  In 2011, the Sixers selected Allen with the 50th pick in the 2nd round. 11 picks later and he would’ve missed the cut, having to prove everything he could at an NBA team’s invitation to training camp that he’s worth a contract as an Undrafted FA. ESPN, as his former Twitter handle read, even ranked him as the worst player in the NBA before his rookie year began, as “Mr. 500”.

Yet, here Allen is, about to embark on his third season in the League and not letting the odds or critics bring him down.

Allen averaged career highs in points (5.8) and rebounds (5) per game last season for the Sixers while starting in 37 games.

Philadunkia’s Jeff McMenamin got a chance to catch up with Allen on Tuesday night, where he was a panel speaker for the Beyond Sports Summit — an event which raises awareness on the impact that sports has in being a catalyst towards social change throughout the world.

McMenamin: How does it feel to be at the Beyond Sports Summit? Has it been cool to talk with some of the other notable attendees, like yourself?

Allen: It feels great. I didn’t know what to expect until I actually got here. I’m glad I did it, I met a lot of great people like Brian Dawkins. He kind of looks like my uncle a little bit which is weird (laughs) but it’s just great.

McMenamin: Not many people really know the story behind you as a basketball player. When did you get your start as a player and when did you realize that your talents could potentially take you to the next level?

Allen: I was born in Trenton, New Jersey. When I was seven or eight I moved to Levittown, Pennsylvania in Bucks County. I had a late start to basketball. I didn’t really pick up that passion for it until high school at Pennsbury. When I was younger I used to always go to the courts with my older brothers and watch them play, but I was always too young to get on. When I got to high school that’s when I really started to get into it. My high school coach Frank Sciolla was a big part of my life and really inspired me and told me that I really have a chance to be a great player. That’s when I really started to hit the gym every summer and work hard at it.

McMenamin: You went on to Temple University with coach Fran Dunphy. How did Fran keep your development moving into the type of player you are today?

Allen: Fran’s a great coach. He really taught me a lot not only on the court but off of it as well in terms of giving back to the community. He always told us how fortunate we were to be Division I college basketball players in terms of getting tuition and expenses paid for and said whenever we get a chance we should give back.

McMenamin: You spent some time playing overseas in France before your rookie year. What was that experience like?

Allen: My rookie year is when the lockout was going on so the first couple months I went to France. Fortunately I went over with a couple guys I had already played against and that I knew very well. It was different. Not too many people spoke English, the food was terrible but luckily they had McDonald’s over there.

McMenamin: What went on back on draft day. Any nerves? What was the feeling like to finally be selected?

Allen: During the whole draft I was at a secret location by myself. I was nervous the whole time. I was flipping in between channels from the draft to the show basketball wives. I didn’t actually see myself get drafted, my agent texted me and said, “you’re a Sixer.” I definitely jumped up and down a lot when I found out.

McMenamin: New CEO Scott O’Neil was one of the speakers at the event. Have you talked with him at all to see where his head’s at moving forward?

Allen: We talk every now and then, but they’ve got so many things going on right now that it’s going to take a little time before we can all actually sit down and really talk about things. This is a season of rebuilding and growth.

McMenamin: One player who you had a chance to play with during your time at Temple, Khalif Wyatt, played very well in OSPL. In your mind, what are his chances to make the team at the moment?

Allen: I think he has a good chance. I hope he makes it. You never know at the end of the day but he’s been playing pretty well. I always tell him to be the first person at practice and the last person to leave and things that I had to do my rookie year to get to where I’m at. I just try to help him out as much as I can.

McMenamin: Is it weird at all to see Khalif in the position he’s in and to think back at how far you’ve come as a player since you were drafted in 2011?

McMenamin: What about Nikola Vucevic. Is it strange to you that you’re the guy left on the team from that draft year?

Allen: Nikola and I bonded pretty well in our rookie years. I was sad to see him leave, but I’m glad he’s doing well. He’s playing really well right now and I’m happy for him and I hope that one day in the future we’ll get the chance to play together again.

McMenamin: Are you excited to get back to business and train with guys like Nerlens Noel in a few weeks?

Allen: All my new teammates I’m excited to meet and play with. I’m excited for the season to start.