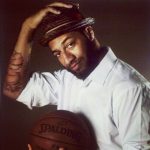 On Monday ESPN.com launched its annual #NBArank series which counts down the Top 500 players in the NBA…according to ESPN’s panel of over 100 “experts”.

As you probably know by now, for the second time in three years, a member of the 76ers was slotted last in the rankings and earned the distinguished title of  “Mr. 500”.  Two years ago, that title belonged to Lavoy Allen.  Lavoy handled his “Mr. 500” title with class.  At times he even appeared to embrace the ranking and use it to his advantage on and off-the-court.

In 2013, the “Mr. 500” label has been assigned to one of the newest Sixers, Royce White.  So far, it seems that White is handling the situation just fine as well.

Given that I have watched White live during his Iowa State days and on tape in the D-League, the ranking was a bit of a surprise to me. However, the biggest shocker on Monday was not White’s #500 ranking, it was the outpouring of support for White that followed on social media yesterday.

I know in this age where fans are super connected to athletes (White has 320K+ followers on Twitter) and celebrities through Twitter, Instagram, Facebook, Vine, etc., that I shouldn’t be shocked by anything that happens on social media. Shaq meets up with random Twitter followers for lunch.   Mila Kunis went to prom with some very lucky high school boy’s.  Thad Young hosts trivia contests and gives away stuff.  All of these (and many more) next level close encounters with athletes and celebs are thanks to the power of social media.

Still, White has barely had a cup of coffee in the League and is far better known for his off-the-court life then his basketball skills.   So, I will admit that the level of  support for White caught me off-guard as did the personal nature of some of the Tweets.

Below is a look at some of the 100’s of  supportive and positive Tweets directed at White on Monday after it his “Mr. 500” ranking was revealed on ESPN.com.

“@LarrySocks1: @highway_30 @MySportsLegion don’t listen to the haters bro you are a huge influence to me keep doing you” Thank you, #BeWell

@Highway_30 Your story has helped me overcome so much man. Stay Strong!

@Highway_30 im glad espn put you at 500 for now. It is going to make your story that much more inspirational. everyday 1 step at a time

@Highway_30 stay posotive royce. Hope to see you out on the Court with My Favorite Team Sixers. Put God First and The Blessings will come

@Highway_30 You’ve accomplished more in your life already than anyone else in the NBA ever will. Mental health is bigger than a game #BeWell

Watch out, because there’s no way @Highway_30 gets called out like that and doesn’t show results #BeWell

@Highway_30 don’t let them bring ya down. I saw you ball on UK in the 2012 NCAA tourney. I’m not buying you’re the worst player in the NBA.

@Highway_30 hopeful that the 76ers have been more understanding of anxiety so I can see one of my own play. #anxietytrooper

White responded to the flood of support by posting the following Tweet:

Thanks to the ppl tweeting me support… I appreciate it, alot. #BeWell