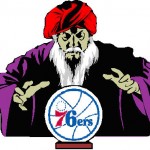 As a reminder, this Philadunkia question and answer series is “loosely based” on ESPN.com’s highly successful, NBA related series of posts titled “5on5”.  Our version of this genre of posts will ask 4 Philadunkia scribes to answer 4 topical, hot button questions about our Philadelphia 76ers.

Well, as any great hoops coach will tell you — playing 4on4 is the best way to truly learn the game of basketball.

1)  MCW1 or Tony Wroten — coming out of camp, who wins the starting PG job for the Sixers?

Jeff McMenamin:  Neither.  I believe that Evan Turner should be the starting PG on this team.  This is a contract year for Turner.  If the Sixers want to get anything for him at the trade deadline, then he has to increase his averages.  If it works out, the Sixers can hopefully trade him for extra picks in next year’s draft or a young piece to develop. If not, the Sixers will likely lose anyway so there’s no harm done. MCW and Wroten have plenty of time to develop.

Steve Toll:  Tony Wroten.  This is a slam dunk.  Wroten is 18 months younger than MCW and has more upside.  Any optimism about MCW rightly disappated at Summer League.  Wroten will take his lumps but a true genius, like Sam Hinkie, is fully aware of how unimportant the Point Guard position is.  Hinkie and BB are going to put the better basketball player on the court.

C. Smith:  Wroten.  I believe the Sixers staff will give Carter-Williams every opportunity to win the starting PG job, but he won’t be able to grab it and take command, because he’s not ready to be a starter in theis League.  So Wroten will end up as the starting lead guard on opening night.  And I’m okay with that for now.  I really like Wroten’s size, skill set and athleticism.  Additionally he has some NBA experience and that will be beneficial as things on offense break down early and often every game for this team.

Michael Kaskey-Blomain:  Michael Carter-Williams.  You have to think that our own 2013 lottery pick will be given starter status, especially considering the circumstances of the season.  It would be worth the organization’s while to see what the kid can do playing with and against other NBA starters.  If his poor play contributes to lots of losses, they can move on in a different direction, and hey, loosing is part of the plan this season anyway.  Wroten was a great addition in the fact that he will be able to challenge MC-W every day in practice.  The two players are extremely similar in size and skill set at this point, and both players will benefit from going head-to-head on a daily basis.  In a throwaway season, expect them both to see some major minutes, but Carter-Williams will likely be introduced as a starter on opening night.

Jeff McMenamin:  I don’t know much about Lange, but being that he’s a somewhat local guy (South Jersey) who’s coached with some of Philly’s finest college coaches (Herb McGee, Speedy Morris and Jay Wright), I’m a fan. The Sixers need a local guy on the team that can guide some of the fresh faces through the roots of Philly basketball and the passion the city holds for the sport. Jay Wright was once quoted stating, “Billy Lange is one of the great young basketball coaches in the country.” As an assistant, that’s all I can ask for.

Steve Toll:  Insignificant until proven otherwise.   Villanova hasn’t had a player overachieve in a long time.  More often than not, they’ve had guys disappoint after coming in highly regarded.  How much, if any blame should be assigned to the new 76ers hire?  Probably not much but it’s all we really have to go off of.

C. Smith:  Okay move.  Everyone says he is a very good college coach and the NBA types respect his work.  Additionally, the Rockets franchise was enamored with him in the past.  All of those facts tell me he must being doing something right.  The Sixers will basically be a well paid college team next year, so why not bring in someone who has spent the last 9 years on campus and can relate to these youngsters.  However Villanova and the has produced ZERO NBA Draft picks since 2009.  How much of that is Lange’s fault (He came back to Nova in 2011.) is debatable, but it still raises a red flag for me.

Michael Kaskey-Blomain:  Good move.   By all accounts, the signing of Billy Lange would be a good move for the organization.  Lange has in-depth experience coaching at the collegiate level, and will be able to relate well to the incoming crop of young players the Sixers will be inevitably dealing with for the foreseeable future.  Credited by Jay Wright as being one of the best young coaches in the country, Lange has been able to garner respect from his players and peers alike and seems poised to take the next step in his coaching career.  While he could assist with the player development aspect, his collegiate coaching experience, both at the head and assistant coach level, could make him a valuable confidant to first-time NBA head coach Brett Brown.

3)  In this piece by Hangtime’s Jeff Caplan, it is mentioned that Roy Hibbert of the Pacers is giving Nerlens Noel low post tips. What is one low block move you want to see Noel develop ASAP?

Jeff McMenamin:  Right now, Noel is way too skinny to be posting up anyone in this League. I think what Nerlens needs to work on is a solid jump hook. If he can find a way to use both hands then great, but right now his strong hand works for me. He just doesn’t have the physicality yet to be backing down opponents and using his body.

Steve Toll:  Sky Hook.  There is a reason that move is basically extinct and it’s because it’s nearly impossible to become proficient at.  If Noel managed to learn that near mythical move, and avoids injuries….. All-Star, All-NBA, NBA Champion, Olympic Gold Medalist, Hall of Fame will be part of the life of Nerlens Noel.

C. Smith:  A Jump hook.  Noel is going toe a limited offensive asset for a long time, so he needs a go-to-move that can help him deliver 6-8 points a night in the half-court offense.  With his size, quickness and athleticism, the jump hook should be easy for Noel to learn and it could become a nice offensive weapon for the flat-top.  However, thanks to his rail thin frame, establishing position on the blocks that will allow him to put up a jump hook will be a huge challenge for Noel.

Michael Kaskey-Blomain:  Back-to-the-basket baby hook.  As far as Nerlens Noel is concerned, there is nothing I would love to see more than for him to develop some sort of post presence.  He may be a beast on the defensive end, but his overall value will be limited if he can’t contribute offensively. Namely, I would love to see Noel develop a back-to-the-basket baby hook.  If executed properly, the move is almost unstoppable; at least unblockable.  This was one of Shaq’s go-to moves during his days of domination, and a move that even Andrew Bynum is able to execute well (when he plays).  Adding this move to his repertoire would make Noel more of a viable option on the offensive end.

4)   ESPN.com is currently running their #NBArank series and as we all know 5 Sixers were in the bottom 100 — Anderson, Brown, Kazemi, Ohlbrecht and of course “Mr. 500”, Royce White.  So who will be the highest ranked Sixers and where will his ranking fall?

Jeff McMenamin:  The highest ranked Sixers will likely be Thaddeus Young, Nerlens Noel and Evan Turner. I believe Young and Noel will break the top 150. Turner will be somewhere between 250-200.

Steve Toll:  Thad.  The undisputed best player on the 76ers will hit home at #66 on ESPN’s list, which is a solid 15 places too low.  Thad is an incredibly underrated player, which is why he is still in a 76er uniform.  Only a few months past 25th birthday when the season starts, he is the only thing standing in the way from this team being the undisputed Worst of All Time

C. Smith:  Thad.  Is there any doubt who the best player on this roster is right now?  I believe the ‘experts” involved with #NBArank will have him somewhere in the #50-55 range and to be honest that’s disrespectful.  Young is a very, very good player and the lack of attention he receives on the national scene is a joke.  He was the main reason (sorry Jrue) the Sixers were remotely competitive last year during DC’s meltdown season.  The problem in 2013-14 will be that Thad is the only Sixer opposing defenses will have to focus on.  Thus we may witness a decrease in his production because of the extra attention he will receive.

Michael Kaskey-Blomain:  Thaddeus Young.  In a year of two the honor may belong to Nerlens Noel, or some other franchise-saving lottery selection, but as currently constructed, Thaddeus Young will likely chart the highest on ESPN’s #NBARank.  The Worldwide Leader can’t rank Noel too high before he plays in a single NBA game, especially considering his injury issues. It is difficult to imagine that Evan Turner’s 2013-14 upside landed him too high of a spot on the list either, leaving Young as the Sixers only realistic candidate to land in the top 100.  Young is valued and versatile, and will likely be the statistical leader for the Sixers in several categories this season.  I would expect his rank to fall somewhere around 80th overall.