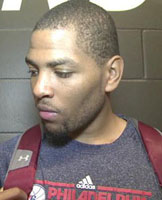 When asked about Wyatt, a rookie who comes to camp on a partially guaranteed contract, Brown said, “I think he’s tempting.  There’s a tantalizing part of him, you know, ‘Is he Gary Neal?” – a scoring point guard, or [something] very similar.  Khalif passes very well, Khalif has a knack for scoring, Khalif’s got to get in great shape…”

After the jump, more of Brown’s thoughts on Wyatt as well as the recent interview Khalif did for Philadunkia.

Brown continued, “There’s a part of his game that you get excited about.  I am convinced that his fitness, because you can get into an argument with yourself about what is his natural position – is it scorer, is it point guard? I’m on the fence.  We used to do the same thing with Gary Neal (in San Antonio).”

More from Brown on Wyatt, “What I do see in him is he can pass and he has an instinct to score, so now you get down to a speed issue and an athleticism issue.  For him to be as good as he can be, he needs to [be] thin, and [have] low skin folds, and [extract] as much quickness as he can.  But he is of interest and he is one that we’re paying attention to.”

Below is the interview Jake Fischer recently conducted with Khalif for Philadunkia:

Fischer:  Congratulations on your new contract.  Did you go down to the Navy Yard to sign the deal?

Wyatt:  Thanks a lot, I really appreciate that.  I was actually at this fundraiser at a middle school and Stephen (Stephen Pina is Wyatt’s agent) said we needed to get this done ASAP, so he just brought the papers over there and we signed it.

Fischer:  Why do you think putting this contract together took so long after you played so well in Summer League?

Wyatt:  I know this is Sam Hinkie’s first season being the man in charge, so I know it’s just a process.  I know they’re still sorting out things with Nerlens and Michael-Carter Williams, so I knew I probably wasn’t their main priority.  I’m sure they just had it in the back of their minds that they were going to do what they had to do to bring me into camp, I mean we had been in contact throughout the summer and they kept telling me to be patient and then it just happened.

Fischer:  What’s exciting about this team?  Why did you want to join the Sixers?

Wyatt:  Well, they’re my hometown team and everything is new over there.  It’s exciting.  They have a new GM, a new coach, a new staff.  It’s just exciting for the city and exciting for me, myself, and I’m just really looking forward to being apart of it.

Fischer:  What does it mean to you personally to have grown up in the Philadelphia area, have played college ball at Temple and now made it to the NBA with the team that calls Philly home?

Wyatt:  Man, it still hasn’t hit me yet.  I went to high school here and I went to college here, so it’s just a blessing that I get to play professionally here.

Fischer:  Is this day something you always dreamed about?

Wyatt:  Yeah, definitely [laughs].  I grew up a huge Iverson fan, so I’ve been a huge Sixers fan for a while.  It’s something I always thought about, but something I never really thought would happen.  It’s really exciting.  It’s big for me, it’s big for people from my town, I’m sure I gave a lot of people a lot of motivation that you can accomplish your dreams.

Fischer:  Based off of my Twitter feed and my mentions, it’s seems like you’re pretty much universally appreciated by Sixers fans.  Do you get that same impression and how does that make you feel?

Fischer:  Did Coach Brown, Sam Hinkie or anyone from the Sixers staff tell you what position they envision you playing? How did they say they plan on using you in this new system?

Wyatt:  I’ve sat down with Coach Brown a couple of times and it really sounds like he views me as a combo-guard on offense but on defense I’m more of a two.   But he just wants me to keep getting better, like guys like Gary Neal that he worked with in the past, and if I want it bad enough I’ll get a chance to be in that kind of role.

Fischer:  With you and Darius Morris now on board, the team now has 14 players either on guaranteed or partially guaranteed contracts.  That basically means they’re committed to you to be apart of this team for the upcoming season. Being undrafted, what’s that kind of security mean to you going forward?

Wyatt:  It means a lot, the fact that they invested in me and that means they’re, at the minimum, interested in me and they see something in me.  That means a lot, going into camp, giving me a little confidence.  But I still know that I still have to earn everything and nothing is going to be given to me.  Coach Brown has made that clear to me already and he just wants me to work hard.

Fischer:  So what have you been doing since we last saw you in Summer League?

Wyatt:  I’ve actually been working out at PCOM with the Sixers, not knowing they were going to sign me or nothing. They’ve been having a bunch of involuntary workouts and they offered me a chance to go so I figured, why not.  So what I would do, is go out there everyday, for the last month, month and a half and just got better and built relationships with those guys.

Fischer:  Who’s been at PCOM a lot?  I know Dionte Christmas has been, I spoke with him at the Philly AND1 Summer Remix.

Wyatt:  Besides the Sixers guys, there were a lot of Philadelphia guys there as well. The Sixers guys work out before and then after they’re done, it’s pretty much an open gym.  It was guys like Dionte Christmas, Hakim Warrick, Mardy Collins, just local Philly guys who are still playing and just trying to get a run in.

Fischer:  And you’ve also been with the Sixers during team workouts at St. Joe’s, right?

Wyatt:  Yeah, I’ve been working out with the Sixers for about a month and a half now.  They’ve been conditioning Mondays, Wednesdays and Fridays at St. Joe’s at night.  We run pickup in the gym and on the track.

Fischer:  How has that been going?  Have any veterans taken you under their wing?  How’s the overall team chemistry?

Fischer:  What are your early impressions of Brett Brown?

Wyatt:  I like him.  He’s energetic and he’s excited to be apart of this rebuilding process and he knows his stuff.  I think we can all learn a lot from him.  I’ve been picking up a lot of the stuff pretty quickly.

Fischer:  Training Camp starts on September 28th, so you have about two weeks until you start.  How will you keep yourself busy until then?

Wyatt:  Right now, I’m just thinking about being the best player I can be for camp and just going to camp and giving it my best shot, work hard and show Coach that I belong and just go from there.  I’m just trying to focus on stuff that I can control.