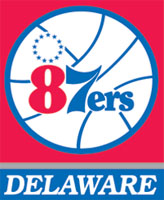 This summer the Philadelphia 76ers announced that the franchise had purchased an NBA Development League affiliate and that Joshua Harris & Co. were now the sole owners of the Delaware 87ers.

Then on August 29, the organization announced that the 87ers had acquired the rights to 16 players via the 2013 NBA D-League expansion draft.

The thing to keep in mind with this expansion draft is the 87ers have nothing more than the rights to sign these players to D-League contracts.  Yes, that means these players would be employees of the D-League as a whole and not specifically the 87ers.  Further, any D-League player that isn’t on an NBA contract can be claimed by any NBA organization at any time.

On September 13, the Sixers announced that they hired Brandon Williams as the general manager of the 87ers.  Williams also will play a role under Sam Hinkie in the 76ers front office as well.

The most important aspect of Williams’ job will be working with Hinkie to designate certain players for assignment with the 87ers. However, Williams can’t just send anyone to Newark, Del. whenever he wants. Per the League’s CBA, only a player with 0-2 years of experience in the NBA can be designated for assignment at any time whereas players with three or more years of experience can only be assigned with the consent of the player’s union.

The 76ers unveiled their training camp roster at media day on Friday, a group that features 11 of 18 players with less than three years of professional experience.  Essentially, Williams has the ability to assign any of Michael Carter-Williams, Nerlens Noel, Arnett Moultrie, Darius Morris, Tony Wroten, Khalif Wyatt, Vander Blue, Tim Ohlbrecht, Hollis Thompshon, Rodney Williams and Lavoy Allen and call them back up to the Sixers as many times as he pleases during the NBA season, if they are under an NBA contract and on the 76er’s active roster.

When an NBA player is assigned to the D-League, that player then has 48 hours to report to their new team and will still receive their NBA salary—a common reason why many teams prefer second round picks to play overseas instead of paying them an NBA salary to play in the D-League.

Another thing to keep in mind is that a common D-League roster is filled with 10 players on D-League contracts, usually of around $25,000, along with 2 players that are on NBA contracts.

So, how can the 76ers utilize this team to their fullest potential?

When you look at the team’s salary page on ShamSports.com, the Sixers have 11 players on guaranteed contracts.  Thus, they have 7 players that are on non-guaranteed or partially-guaranteed deals fighting for a roster spot during camp.

Then, when you consider Nerlens Noel, Arnett Moultrie and Kwame Brown are bound for the team’s inactive list, that leaves 6 players (Morris, Wyatt, Blue, Ohlbrecht, Williams and Thompson) competing for 4 roster spots.

For example’s sake, let’s say the squad keeps Morris, Wyatt, Ohlbrecht and Blue, for their opening night roster – yes, that would mean Royce White is with the team, too.  If the Sixers really feel that one of Williams and Thompson have the potential to develop into a contributing role player in the NBA, they’ll sign them to a minimum NBA deal and designate them to assignment.

And even though that’s unlikely, they should do it.

The Sixers have an unprecedented amount of cap room entering training camp, so they have the funds to have two players balling in the D-League for NBA money.  At media day, Hinkie used the term, “you eat what you kill,” when discussing training camp.  I think the team should implement this mindset during the season as well.

Basically, they could let go of one of those 6 players fighting for a roster spot and put those remaining six players in a never-ending cycle of competition.  One week, Wyatt could be getting buckets left and right in practice and playing well in his 5-10 minutes a game as the Sixers keep losing.  But then, he starts turning the ball over and goes cold from outside, so Hinkie and Williams send him to Newark in exchange for Blue, hoping Wyatt uses it as motivation to improve and get back to the NBA.

If they wanted to get really crazy, the Sixers could even send Noel to the D-League for a few games as MLB-like rehab assignments, replacing him on the injured list with someone who inevitably develops planter fasciitis or something.

As sole owners of the 87ers — many NBA teams share D-League affiliates with two or three other organizations — the Sixers have the ability to control the 87ers’ coach who in turn controls the players’ playing time.  This is just another advantage the 76ers have in owning their own D-League affiliate.

Implementing this strategic tactic is in turn not something every NBA team has the ability to utilize.  And, the Sixers should be itching to take advantage of it.