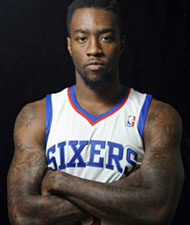 Anyone who reads me closely on this site should know that I’ve had a very critical view of point guard Michael Carter-Williams since his No. 11 selection by the Sixers in the 2013 NBA Draft.

Much to my displeasure, my fears about the 6-foot-6, 185 pound guard were realized during Orlando Pro Summer League where he looked lost on offense, atrocious at shooting the basketball and was physically a ways away from using his height to his advantage against his competition.

In terms of his averages he looked deceivingly good with 13.6 points, 6.8 assists, 4.2 rebounds but he shot a miserable 27-percent from the field while committing 4.8 turnovers a game. On defense, he was being pushed around by stronger and quicker guards like Victor Oladipo and Jeremy Lamb.

There’s a lot of preseason left, but in my opinion the signs are obvious — Carter-Williams isn’t NBA-ready right now.  If guards like Oladipo and Lamb were able to have their way with him in summer league play, what’s MCW going to do against real competition in the regular season?

That’s why I was delighted when the Sixers signed Tony Wroten, a 6-foot-6, 205 pound guard who’s spent the past year under the guidance of defensive-minded guards Mike Conley and Tony Allen in Memphis.

Wroten has the size, athleticism, passing instincts and shooting ability that I believe will take some time for Carter-Williams to master.  I caught up with Wroten at Sixers media day this past Friday where Wroten expressed his expectations coming into training camp.

“Obviously you want to play and I see that opportunity here in Philly,” said Wroten.  “I had great vets last season which helped me grow like Tony Allen, Zach Randolph and Mike Conley.  Being around a winning team, I can teach these guys so much because I know what it takes to get to that level.”

In Day 1 of training camp, Wroten was called the “star of the day” by coach Brett Brown.  He looked faster than everyone on the court and led his second-unit of Darius Morris, Rodney Williams, Royce White and Soloman Alabi past the first-unit of Carter-Williams, Evan Turner, James Anderson, Thaddeus Young and Lavoy Allen.

“Everybody wants the chance to start,” said Wroten.  “I’ve known Mike [Carter-Williams] since high school and we’re both 6-foot-6. Training camp is going to be a fun competition between us.  I loved my opportunity in Memphis, but coming here I have the opportunity to play a lot of minutes.”

Addressing the media after practice, Brown had nothing but kind words to say about the talented Wroten on Monday.

“He plays with tremendous energy when he stays focused,” Brown said.  “When he stays focused and stays in the game, he really can do some things because he’s so physically gifted.  I think he passes so well, like a Tyreke Evans type of player. You instinctively say he can play the one, and I think he can pick up full court and harass point guards.”

In the Las Vegas Summer League, Wroten put up 12.2 points, 3.5 assists and 3.3 rebounds with the Grizzlies.  He also had trouble shooting the ball finishing at just 25-percent.  This is obviously something Wroten must work on as well, but his physicality and athleticism that he holds is something which can’t be taught and something that needs to desperately change for Carter-Williams to be effective in this league.

“Tony Allen always told me ‘be ready or get ready,’” said Wroten.  “It’s as simple as that.  In this league you have to be ready at all times or someone else will be instead of you.  I’m excited to make the most of the opportunity the Sixers have given me.”

RT @LaurenMRosen: It’s been a great season for #content But I believe the hydration content hasn’t gotten enough love So as the final thi…
h J R
Follow philadunkia